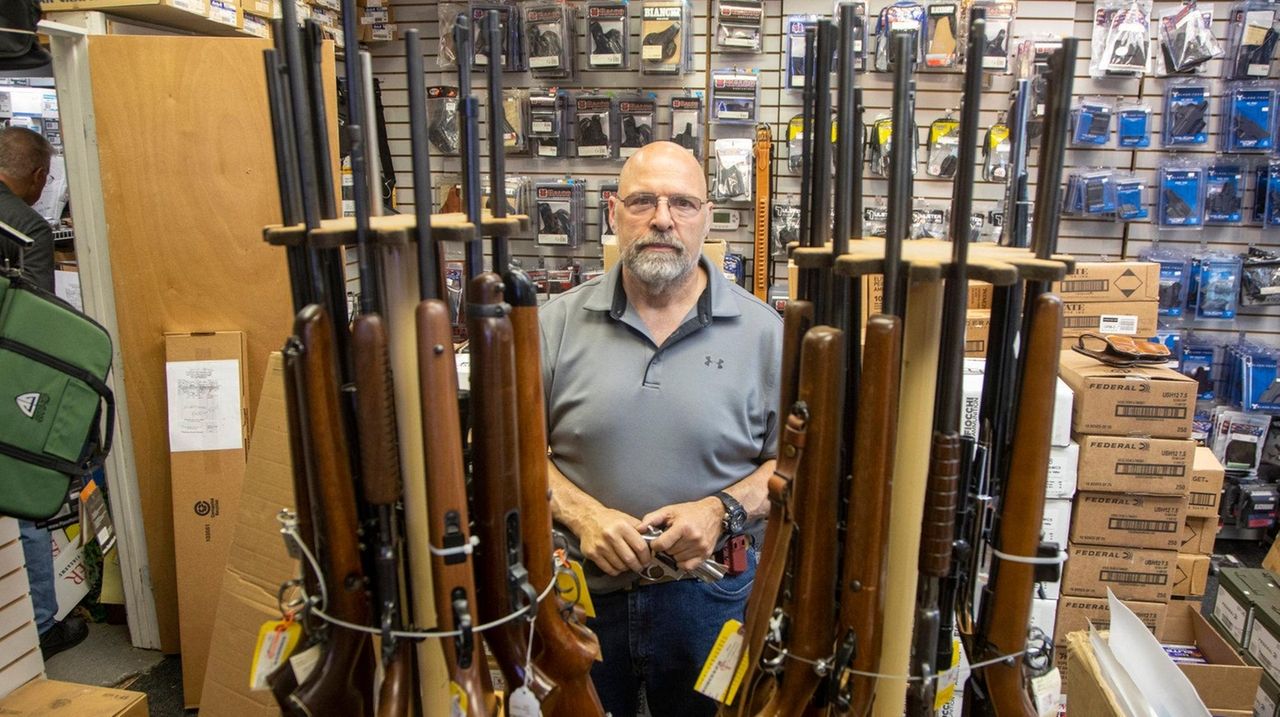 Andrew Chernoff, owner of Uniondale's Coliseum Gun Traders Ltd., says his business has seen a rise in demand for guns and ammos amid unrest over police brutality that has intensified across the country and on Long Island. Credit: Howard Schnapp

It’s noon on Wednesday, the day after another night of intense protests nationwide over police brutality, and the line outside Coliseum Gun Traders in Uniondale is 50 people long.

“Business is good,” said Andrew Chernoff, the store’s owner. “People are starting to take things into their own hands.”

Demand for Coliseum’s products — handguns, ammunition, and especially shotguns — has been high since the coronavirus pandemic touched down stateside earlier this year. But this week, with the news dominated by reports of looting and destruction, sales have spiked once again.

The phenomenon is not unique to his store. Across Long Island, gun store owners described brisk commerce this week as unrest intensifies after the police killing of George Floyd in Minneapolis. With protests now cropping up across Nassau and Suffolk counties, the fear that looting or violence could soon visit quiet suburban neighborhoods has come with them.

“I’m a Vietnam vet and I’m ready for anything," said Tony Suau, who was waiting in line to buy a shotgun from a gun store in Franklin Square on Wednesday.

Suau, 73, of Floral Park, cited news reports on the looting and violence in his decision to arm himself.

Long Island gun store owners said they’ve seen spikes in sales before: Y2K, the passage of gun control laws, before and after elections. But this time is different, they said.

“This is like total new shooters,” said John Sweezey, the owner of Camp-Site Sport Shop in Huntington. “New gun owners.”

Michael Pucci, who owns Orion 7 Enterprises in Middle Island, said half the calls to his store are from women. The store specializes in historical, collectible firearms, but it also stocks some modern rifles and shotguns.

Some waiting outside Long Island gun stores on Wednesday condemned Floyd’s killing and said they support peaceful protests. It was the looters who scared them — and the prospect of widespread looting on Long Island in particular.

Protests around Long Island have generally been peaceful.

“It’s been quiet here so far,” said an East Meadow woman, who declined to give her name. But “if something shows up on my doorstep. I want to be prepared.”

The woman, a teacher’s aide, said she decided to build out her arsenal after seeing a purported flyer for a Black Lives Matter march in Merrick on Tuesday.

“We will march east through white privileged neighborhoods towards Massapequa,” it read. “What is theirs is ours!!!”

She already owns a shotgun, but she’d like another.

“One for each floor of the house,” she said.

A spokesman for the Nassau County Police Department said he was not aware of any arrests or break-ins at that demonstration.

Not everyone waiting outside gun stores on Wednesday was there because of fears of looting.

“I’m buying a gun in response to the police,” said Toyisha Bethea, who is black.

She said she feels “very” threatened by law enforcement and has experienced police brutality herself.

“Being black in America, you experience it all the time,” she said.

Bethea, 40, of Elmont, planned to buy a shotgun.

A permit is required to buy a handgun on Long Island and elsewhere in New York, but not to buy a shotgun. A background check is conducted, however.

“It’s nice to have an uptick in sales,” Pucci said. But “it’s not something that we like to see.”