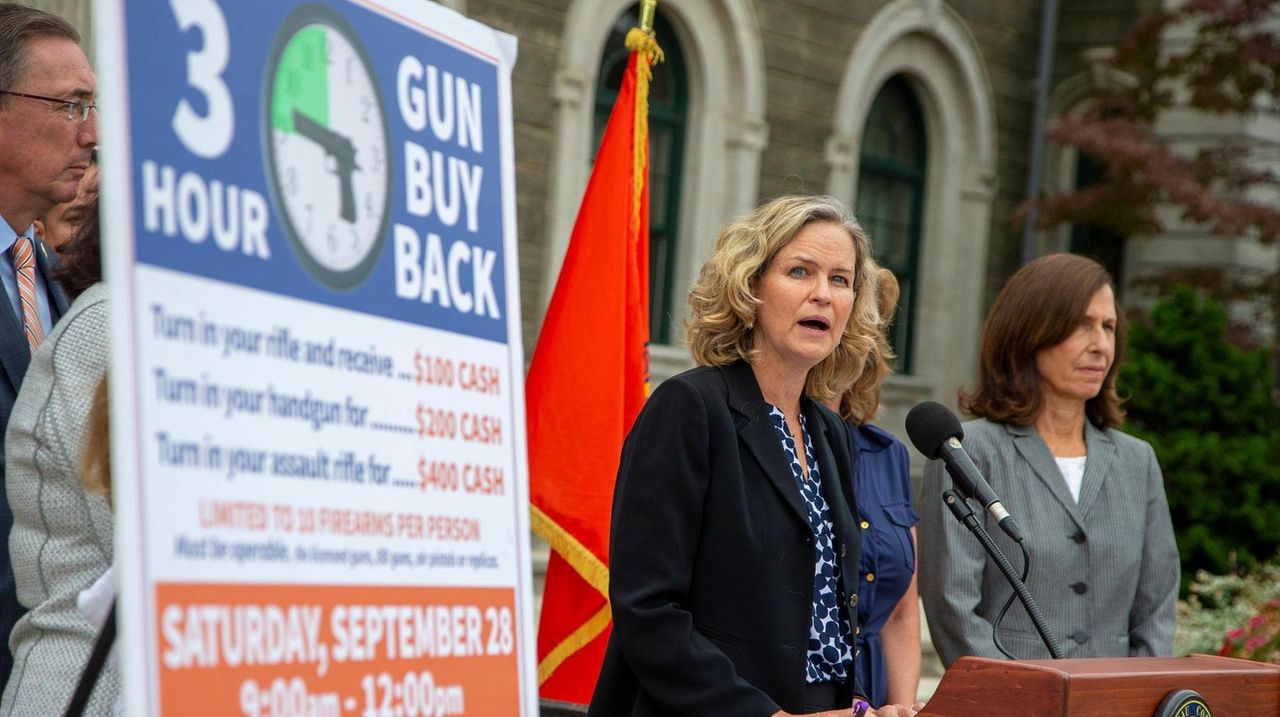 Nassau officials on Monday announced a gun buyback in Hempstead that will take place on Sept. 28. Participants will remain anonymous and can receive $100 to $400 in exchange for their weapons. Credit: Howard Schnapp

Nassau officials announced Monday a gun buyback in Hempstead amid weekend violence in the village that left two people injured in gang- and drug-related shootings.

“Hempstead is a place obviously that we’re concerned about in terms of gun violence,” said Singas, who added such buybacks have been held across the county.

Hempstead Village has recorded six homicides this year, up from the four homicides in 2018. And two people were wounded in a single block in less than 24 hours beginning Saturday afternoon.

Ryder, who said the shootings occurred at times when the extra patrols weren’t active, said police were close to making an arrest in one of the shootings. He added that Hempstead police officers have been close partners in the crackdown, providing intelligence which he said had prevented crimes and resulted in arrests.

“There hasn’t been another homicide since we began our initiative,” the commissioner said.

Assemb. Taylor Darling (D-Hempstead), said she received calls from panicked residents who were afraid to leave their homes because of the shootings.

The first shooting occurred on Saturday at 2:49 p.m. inside 100 Terrace Ave., where a man was shot in the leg, Ryder said. Then on Sunday about 7 a.m., a 25-year-old man was shot four times in the torso outside of 107 Terrace Ave., he said.

Ryder said both victims are expected to survive. No arrests were made as of Monday evening. Police are investigating whether there is a link between the shootings.

At the news conference, advocates from Moms Demand Action and Long Islanders for Gun Safety spoke about the need for federal gun control legislation along with Beigel Schulman.

Her son, Scott Beigel, a 35-year-old Dix Hills native and geography teacher, was one of 17 people fatally shot during the Feb. 14, 2018, Parkland massacre. He was shot, officials have said, while attempting to lock his classroom door after he had ushered students inside.

“Gun safety is not a partisan issue,” said  Beigel Schulman, who said she is pushing for the passage of a federal "red flag" law, that allows guns to be taken away from those determined by a court to be a threat to themselves or others. She said the law would have saved her son’s life.

The Hempstead gun buyback is scheduled for Sept. 28 from 9 a.m. to noon at the Union Baptist Church on Clinton C. Boone Place in the village.

Rifles will net $100, while handguns are worth $200 and assault rifles will be rewarded with $400. The buyback is being funded with asset forfeiture funds from both the district attorney’s office and police department.

Darling said she’s supportive of the increased police presence in the village, but wants officers who are “culturally competent” to ensure that “bystanders aren’t treated like common criminals.”

She’s heard from several constituents, she said, who said they were recently pulled over by police.

Ryder said while more people may be getting pulled over, fewer are getting tickets for vehicle and traffic law infractions.

“My guys are instructed, ‘look, your job is really to communicate, tell them what they did, and tell them to have a nice day and move on,’” Ryder said. “And that’s how you build community relationships.”