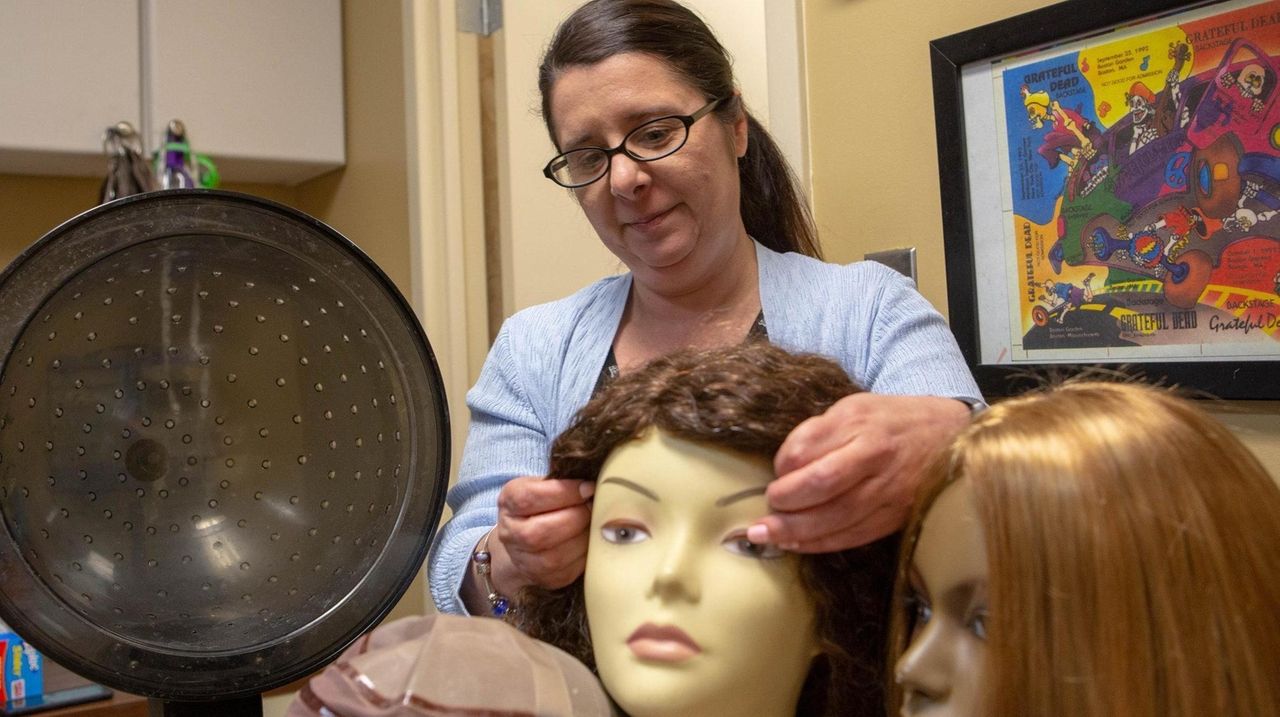 The Long Island-based nonprofit Hair We Share collects hundreds of freshly cut hair donations from people on Long Island, around the country and the world in order to provide those experiencing medical hair loss with a free wig. Credit: Newsday / Shelby Knowles

When Suzanne Chimera and Dean Riskin walk into work every day, they expect anywhere from 75 to 100 packages to arrive in the mail — each filled with ponytails.

Their small Roslyn Heights office has thousands of freshly cut hair donations from people around Long Island, the country and the world sorted in large storage bins around the space, ranging from brown hair and blond hair to curly hair and dreadlocks.

Those individually packaged ponytails in Ziploc bags will eventually become a free wig for children and adults experiencing medical hair loss, thanks to the LI-based nonprofit Hair We Share.

“Normally, I am under ponytails,” Riskin said from his office, with a bagged ponytail on his desk and a bin of others underneath. “Not underwater, under hair.”

Hair We Share says it's the only Long Island nonprofit that collects donations at St. Baldrick’s Day events or places like colleges, school classrooms and salons, and processes them to become wigs for people in need. They gift the custom-designed wigs to children and adults who have dealt with cancer treatments, alopecia, burns and accidents, Chimera said.

The donations get sorted at the Roslyn Heights office and then are sent to a factory in China to be manufactured, she said. When the wigs return, they get customized for each client and are sorted in drawers by 22 color combinations, textures and sizes. It takes between six to nine ponytails to make one wig.

“People are going through something so terrible, and you’re there to kind of make them feel like themself again,” said Chimera, who co-founded Hair We Share with Riskin in July 2014.

“It brings back self-esteem to individuals who are really struggling,” Riskin added.

The nonprofit has designed more than 200 wigs for people since its inception, and currently has more than 10,000 ponytails sitting in the office waiting to be processed. In a storage room separate from the office, they have “ponytails to the ceiling,” Riskin said.

Chimera has been doing custom wig design and creating hair pieces while working for Riskin at Manny Roberts Hair Replacement since 1994, which still also runs out of the same office. She says she got the idea to start the nonprofit while her boss was away on vacation.

She had designed a wig for actress Georgia Van Cuylenburg, who appeared on ABC's 20/20 in 2013 to talk about her struggle with alopecia. The episode inspired the mother of a 13-year-old girl with alopecia in West Virginia to reach out to the actress to find out where she could get a wig for her daughter.

Chimera didn't want to charge the family for a custom-designed wig, so she solicited hair donations to make it, largely through social media. Within a week, she said 42 people sent in hair from around the world, and seven of those donations were used to make that wig.

She knew then that running a nonprofit was what she was “supposed to be doing," she said.

“I didn’t expect the sense of community,” she added. “These people from all different places came together and did something for one person.”

For Patty Leahy, 48, of East Meadow, hair loss came out of nowhere. At 45, the mother of two was formally diagnosed with alopecia universalis, which caused her complete hair loss from head to toe.

“It was very traumatic,” Leahy said, adding that alopecia had also brought on psychological and emotional stress. “Losing my hair was like losing my identity.”

She tried medications and remedies to try to keep her hair, and experimented buying synthetic wigs — but not much helped, she said. The synthetic wigs knotted and snapped easily and didn’t give her the natural look she wanted.

She learned about Hair We Share through mutual friends, and Chimera offered to make her a wig. Chimera examined photos of Leahy before she lost her red hair, and made her a wig.

“I was just so happy to finally feel more like myself, and to have hair that I can manage better and feel more comfortable in,” Leahy said.

But hair donations are not enough to make the wigs, Riskin said. It takes about $125 to process one ponytail donation for making a wig, he said.

“People don’t understand that if they donate their hair — they think it’s going to magically turn into a wig,” he said. “There’s so much work involved.”

Instructions for how to donate can be found at hairweshare.org.

How are donated ponytails turned into wigs?

The process to make a wig from a donated ponytail is not instantaneous.

From the time that Hair We Share receives the hair donation to the time they have a complete wig is about four to six months, said co-founder Suzanne Chimera.

Once the hair is cut and sent to the Hair We Share office, it gets sorted and matched to other donations based on the curl, texture and color. The hair is then packaged together with similar donations and gets shipped to a factory in China, along with wig dimensions and specifications for each recipient.

At the factory, the hair is whipped through a hackle — a tool that looks like a bed of nails mounted on a table — to remove all of the broken and shorter pieces of hair. The back of the wig is sewn with a machine, but the front, top and sides of the wig around the face are sewn by hand to the lace wig cap, one strand of hair at a time. That gives a wig a natural appearance, Chimera said.

When the wigs return to Roslyn Heights, Hair We Share designs them to the recipients’ needs. The wigs could retail for hundreds of dollars, she said.

When someone donates hair to Hair We Share, they can also “track” their ponytail. With a $125 donation to cover the manufacturing expense to process the ponytail, the nonprofit logs it and corresponds with the donors to reveal which wig it contributed to.