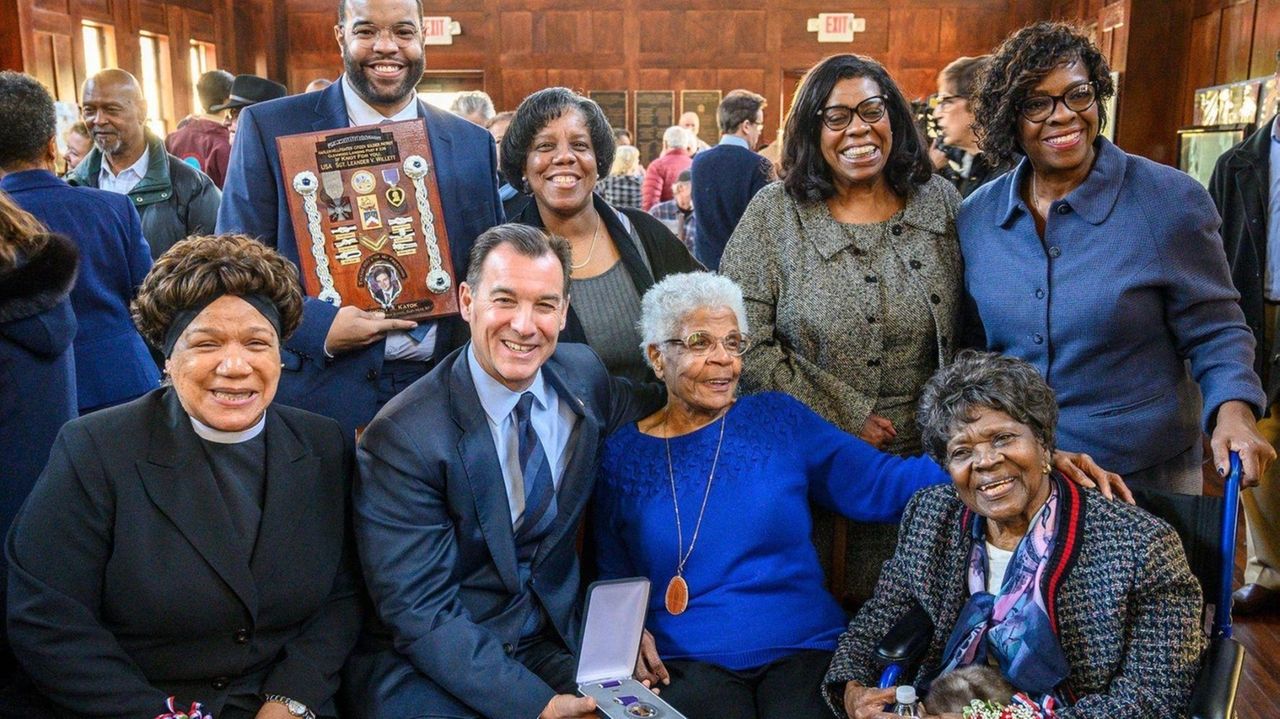 The medal was presented by Rep. Tom Suozzi to the descendants of Sgt. Leander Willett, a Harlem Hellfighter -- as members of the U.S. Army 369th Infantry Regiment are known -- at a ceremony in Glen Cove on Saturday. Credit: Newsday / J. Conrad Williams Jr.

More than 100 years ago, Glen Cove’s Sgt. Leander Willett fought in a U.S. Army uniform in World War I alongside French troops because African Americans like him were banned from serving with white U.S. soldiers.

Willett was stabbed with a bayonet and suffered through German mustard gas attacks. But it wasn’t until Saturday, more than a half century after his death, that his bravery was honored with a Purple Heart.

“A grateful nation says thank you to Leander Willett and his family,” Rep. Tom Suozzi (D-Glen Cove) said as he presented the Purple Heart to Willett’s only surviving daughter, Clara Willett, and to his grandchildren and other relatives during a ceremony at the North Shore Historical Museum in Glen Cove.

Clara Willett, 80, of Westbury, said she knew her father and other members of the black U.S. Army regiment known as the Harlem Hellfighters would be honored Saturday. She thought it would be a small ceremony. She didn’t expect a standing-room-only crowd of 70 or speeches by dignitaries that included France’s top diplomat in New York, Consul General Anne-Claire Legendre.

She was especially stunned by the Purple Heart.

“It’s just such an honor to get something like that that’s so meaningful that you never expected…,” she said. “I’m going to carry it around with me all the time. I’m never going to let it out of my sight.”

Willett was one of more than 40 African American men from the Glen Cove area who fought in the Army’s 369th Infantry Regiment, “gaining the nickname the Harlem Hellfighters from the Germans, who dreaded facing men of their courage and determination,” said Richard Harris, who curated a Hellfighters exhibition that was displayed at the museum in late 2018 and early this year.

The regiment spent 191 days in combat, longer than any other U.S. unit, according to the National Archives.

The Hellfighters fought for and returned to a country that denied them basic rights.

“They faced unconscionable discrimination before, during and after the war,” Harris said. “Their story however is also about extraordinary bravery, dedication and sacrifice, about an incredible courage and dignity in the face of battle and racial prejudice.”

Debra Willett, a granddaughter of Leander Willett, asked Suozzi’s office to advocate for a Purple Heart for him. Racism had long denied him the honor, she said.

“I’m very proud but I’m also a little upset,” Willett said. “I’m proud he went to war, but I’m a little upset that I had to push 100 years later for him to get the recognition he deserved.”

Suozzi said his office failed in the first attempt to obtain a Purple Heart because the Pentagon said there was not enough documentation to support it. After providing military medical records of his injuries, the Pentagon gave its approval for a Purple Heart “for wounds received as a result of hostile actions” in France on Oct. 4, 1918, according to Suozzi’s office.

“What we’re doing today is really one small, small thing in an effort to try to right some historical injustices to recognize African Americans who have done so much on behalf of this nation,” Suozzi said.

Suozzi announced Saturday that he would introduce a resolution in Congress to award and design a Congressional Gold Medal — the highest civilian honor in the United States — to the Hellfighters.

Other honors proposed by the Harlem Hellfighters Citizens, Soldiers and Patriots Advisory Board — a group borne of the Glen Cove museum exhibit — also were announced.

Nassau County Legis. Delia DeRiggi-Whitton (D-Glen Cove) said she would request approval for a $75,000 county grant to erect a monument honoring the Hellfighters in Glen Cove, and state Assemb. Charles Lavine (D-Glen Cove) and a representative of Sen. Jim Gaughran (D-Northport) announced sponsorship of a measure to a create a state day of remembrance for the Hellfighters.

The museum is developing a curriculum and exhibition on the Hellfighters to be used and displayed by Long Island schools and libraries, museum director Amy Driscoll said.