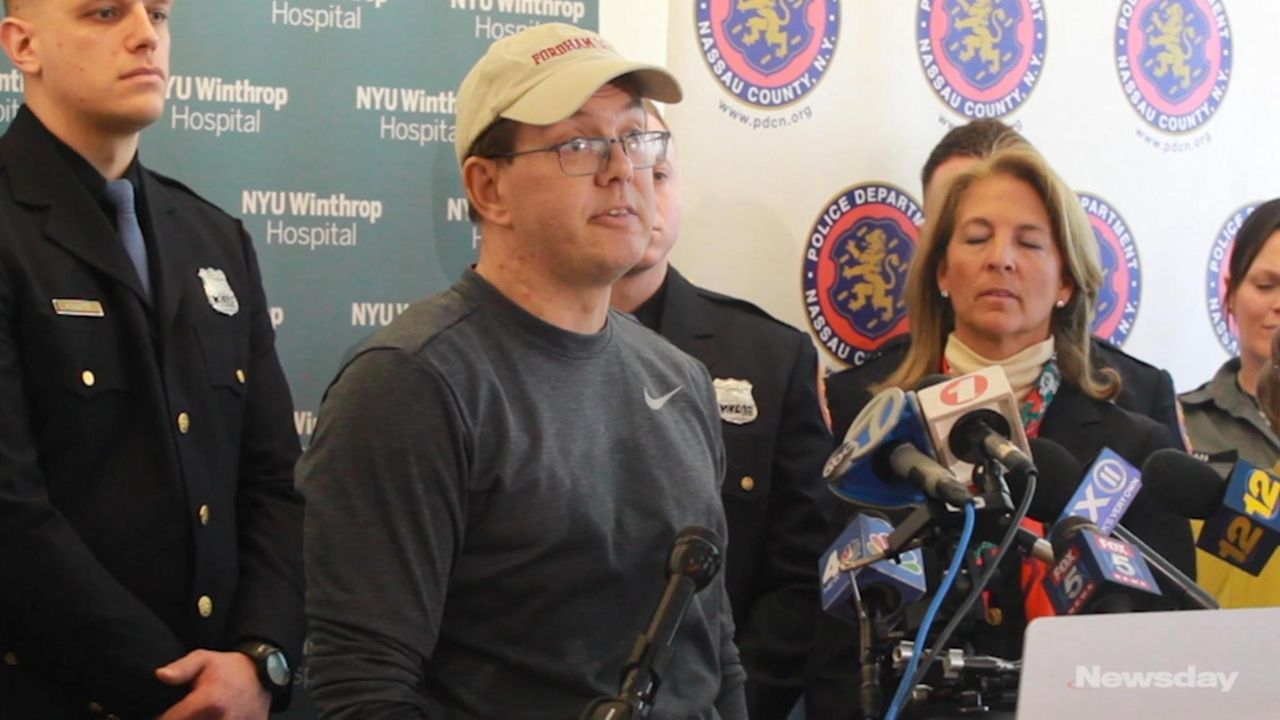 Brad Wieboldt of East Norwich, nearly two weeks after suffering a heart attack on an LIRR train, thanked those who helped save his life during a news conference Thursday at NYU Winthrop Hospital. Credit: Howard Schnapp

Brad Wieboldt woke up on his 51st birthday from a medically induced coma with a special present — he was alive after suffering a heart attack on the Long Island Rail Road.

And nearly two weeks after the day he nearly died, he still doesn’t know the identities of two Good Samaritans — a nurse and a medical student — who saved him by applying CPR for about 15 minutes until the train pulled into a station, where Nassau County police and medics were waiting.

“It’s not lost on me that I should have died,” Wieboldt of East Norwich said Thursday at a news conference at NYU Winthrop Hospital, where doctors had put him into the coma and inserted two stents to open a blocked artery.

On March 18, Wieboldt took the 7:47 a.m. train out of Syosset to his job as director of marketing at Fordham Law School in Manhattan. Shortly after the train departed, he emitted a loud snore-like noise.

Kelly O’Hara of Oyster Bay Cove, an executive going to work, was sitting two seats in front of him.

“He made an initial snoring sound, and then there were two or three sounds after that” like heavy breathing “that didn’t sound right to me,” O’Hara said at the news conference. “That’s when I jumped up. I heard a bang, and his head fell down on the headrest, and then you swing into action.”

O’Hara said she “ran up and down the train yelling for a doctor and a nurse. We were lucky enough to find a second-year med student and a nurse in two different cars from two different directions.”

The nurse and the student kept Wieboldt alive with CPR, until the train, an express, pulled into Westbury, where police took over the rescue effort. They had to shock his heart several times to keep him alive, Ryder said.

At Winthrop, doctors put Wieboldt into the coma for about 36 hours, lowering his body temperature to the low 90s to protect his brain, said Dr. Herbert Hirsch, one of the cardiologists who treated him. They also put in the stents.

Over the next few days, doctors slowly warmed up Wieboldt's body, and gradually he came out of the coma. He fully woke up on March 23, his birthday.

Wieboldt remembers none of it — not the attack on the train, the Good Samaritans who saved him, the treatment in the hospital. But he is eternally grateful. “I wouldn’t be alive today if every single person didn’t actually play their own part,” he said.

Hirsch said, “This is a miraculous recovery. This was a huge chain and everybody did their job, and because of that,” Wieboldt survived.

Wieboldt said he felt fine the morning of the heart attack before he got on the train. He had recently lost 20 pounds, kick boxes five or six times a week, and in November passed a stress test with flying colors.

Now he is just glad to be alive, and besides thanking O’Hara and the police, he wants to locate the Good Samaritans. “Obviously I’d like to thank them for saving my life,” he said. “Not all people would just step in and do anything.”