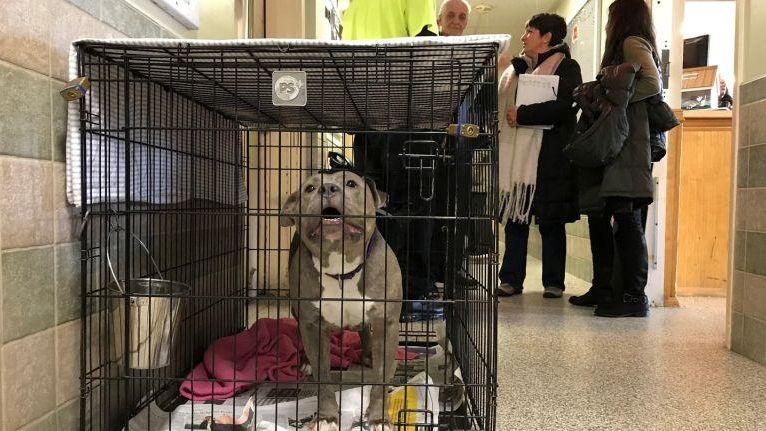 Schnirman said auditors would “follow the money” to examine expenditures and hiring practices, but noted he does not have veterinarians on staff to examine the health of the animals.

“Our auditors are going to look at hiring practices and determine if too much money is being spent on people who are not qualified to do the job for which they are assigned,” he said. “Any findings that go beyond our area of expertise will be forwarded to the appropriate authorities.”

Hempstead Supervisor Laura Gillen said the shelter in Wantagh has a budget of $4 million, including $3 million devoted to payroll, and “has been a lightning rod of controversy for years.”

She said her office has been inundated with complaints the town is now investigating, while addressing multiple lawsuits.

“There are serious allegations that make us need to inform our decisions with independent investigators outside the Town of Hempstead,” Gillen said. “Ensuring our animals enjoy a quality of life in a nurturing environment is paramount in serving the public and our pets and says a lot of who we are as people.”

He said he would not “referee a political fight,” and said it wasn’t meant to be “a gotcha investigation.”

King Sweeney, the town board’s Republican majority leader, said Gillen should have addressed any financial allegations with fellow board members before calling the comptroller to hold a “dog and pony show.”

“The care and welfare of hundreds of animals and the handling of millions of dollars is not something that should be politicized,” King Sweeney said in a statement.

Gillen said she spoke with King Sweeney on Wednesday about the shelter and invited them to attend the news conference.

“I have spoken with every member of the town board about these issues and we all care about doing what’s best for our animals,” Gillen said. “This is not a political issue.”

Republican Councilman Anthony D’Esposito said he had not talked to Gillen about financial issues at the shelter or about any specific complaint.

Former Hempstead Supervisor Anthony Santino had defended the shelter following a state inspection that showed one of the lowest euthanasia rates on Long Island.

State Comptroller Thomas P. DiNapoli issued a 2012 report critical of the town’s shelter, finding that the town spent more money than other shelters around Long Island and mismanaged overtime and records.