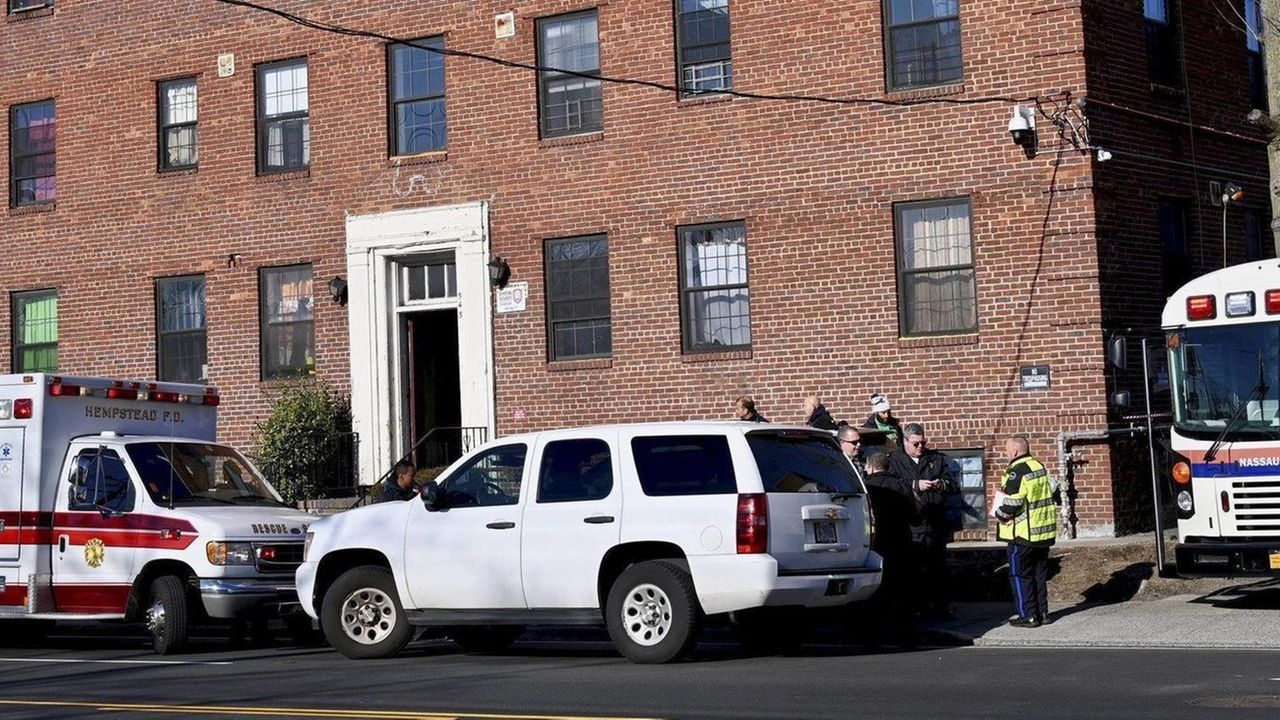 Nearly 100 residents of a Hempstead building were evacuated Wednesday, and nine hospitalized, after carbon monoxide was found to be leaking from illegally installed heaters in their apartments, village officials said.

Twenty-eight people from the four-story building at 545 Fulton Ave. reported feeling ill shortly after 7 a.m., including nine with high levels of carbon monoxide in their blood. A mother and her toddler were found passed out in a back room, a fire official said.

Of those sickened, 19 were treated on site and released and nine went to nearby hospitals,  Hempstead fire officials said. They ranged in age from 5 months to 35 years old. The nine hospitalized were all listed in stable condition.

Hempstead firefighters, who evacuated residents and inspected the building, found illegal heaters in each of the building’s 16 units, village officials said at a news conference. The units house many Latino and lower-income families, they said.

“The things happening with these slumlords are unacceptable,” Deputy Mayor Charles Renfroe said at the news conference. “Had this happened at 2 a.m., it would be a disaster. Walking in and seeing the conditions was deplorable."

Village officials described overcrowding in the building and several apartments converted into illegal bedrooms with partitions or ropes and blankets to include additional cots.

“We realized this was a situation where a landlord was taking advantage of people who would not normally report these violations,” Hempstead trustee Waylyn Hobbs said. “This could’ve turned out much worse than it did.”

Kyle Bowles, the first assistant fire chief for Hempstead, said he would not have found the mother and her 2-year-old child passed out in a back room without Spanish interpreters who accompanied them because residents were too afraid to come forward.

The building is owned by Pebble Lane LLC, and the landlord faces multiple violations by the village, officials said. Village officials identified the landlord as Benjamin Azizian of Roslyn.

Azizian could not be reached for comment. Residents at the Pebble Lane home where the corporation is listed in Roslyn refused to open the door and said Benjamin Azizian was not home.

Wednesday, village officials, police, firefighters, aide workers and a representative from the Nassau district attorney's office were all on the scene, as well as National Grid, which shut off the gas.

Officials said the building did not have required working carbon monoxide detectors and an existing boiler heating system had been broken for a lengthy period of time. Many of the heaters had been installed in closets or cabinets without a permit along with improper plumbing, insulation and natural gas hookups, Hobbs said.

Village officials do not know when the illegal heaters were installed. The last violation for the building was in 2017, for an unknown infraction, officials said.

Residents were evacuated on Nassau County buses to a community center at Kennedy Memorial Park. They won't be allowed to return to their homes for at least 15 days while the natural gas is shut off and the building is inspected, officials said.

One resident, Sandra Morales, 27, was collecting bags of clothes from her apartment Wednesday morning. She said the heat was working, but her family was told to evacuate.

"Nobody is here," she said. "Everyone moved to the park."

Red Cross officials were providing food and shelter until the residents' emergency housing needs can be determined. After 48 hours, their future shelter will be determined by social services, said Nassau Leg. Siela Bynoe.

Some residents arrived at the evacuation center carrying their lease agreements in their pockets and said the landlord had added surcharges to their rent for the heating systems, Bynoe said.

"Anytime you have people who can barely make it and sometimes because of their finances, they're afraid to report violations," Hobbs said. "They're afraid of retaliation that they'll be put out of the building."

Village fire and building inspectors conduct inspections on properties every three years, but officials said they may only inspect individual apartments if a tenant reports a problem. Hobbs said he will seek to require annual inspections.

1:30
'Just show up': Starting Friday, 60 and older will walk in for COVID vaccine
Report: MTA spent $1.1 billion in OT pay in 2020; top earners at LIRR
1:21
LIer makes mask chains, feeds the hungry from 9/11 until now
1:16
'Relief, but not a celebration': LIers respond to Chauvin guilty verdict
Top photos from around LI from April 2021
See photos from the scene of the Stop & Shop shooting
Didn’t find what you were looking for?