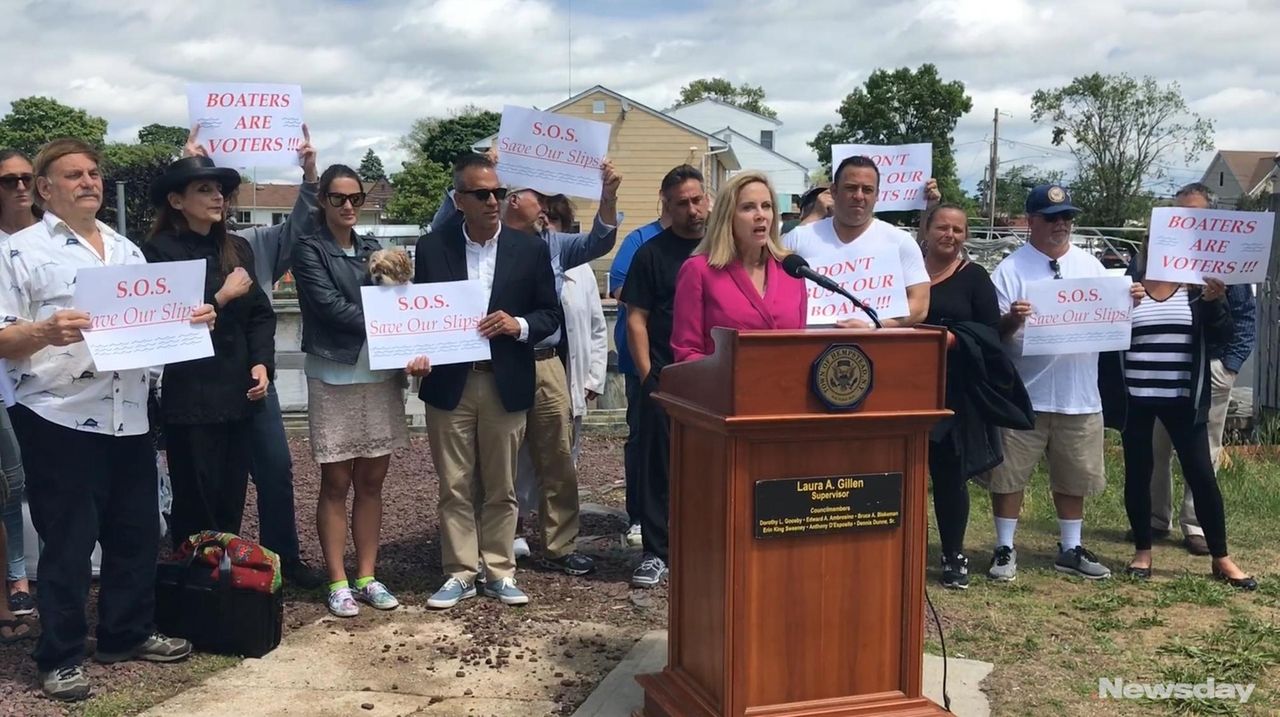 Hempstead Town Supervisor Laura Gillen and residents speak out at the Bellmore Canal in Wantagh against legislation that would restrict the number of boats residents can dock at backyard boat slips. Credit: Newsday / Stefanie Dazio

Hempstead Town Supervisor Laura Gillen on Monday protested legislation that would limit the number of boats that homeowners can dock at backyard boat slips.

The legislation was announced last month by Councilman Anthony D’Esposito and the subject of a public hearing at the May 22 town board meeting. The board did not vote on it then, and it is not listed on Tuesday’s agenda.

D’Esposito previously said the bill is in response to residents’ complaints of pollution and traffic, noting that some homeowners have rented out their docks and that infringes upon marinas.

His proposal restricts docks to one per single residence, and the dock would limit residents to one slip per 20 feet of shoreline. An average lot would fit three slips.

Gillen, surrounded by more than a dozen residents holding signs off the Bellmore Canal in Wantagh, said her office has been fielding complaints and questions about the legislation. She urged D’Esposito to permanently shelve it unless he was prepared to work with the community.

“Obviously nobody thinks that residential backyards should be turned into commercial marinas,” she said, adding that the boaters who rent out or loan slips in their docks are often neighbors helping neighbors.

She also unveiled a petition with about 600 signatures opposing the bill.

Peter DiBenedetto, 47, of Wantagh, said he docks his boat at property he rents with a partner and they rent slips to neighbors.

“Why don’t they cut our taxes in half if they’re going to cut our property in half?” he said.

D’Esposito could not be reached Monday but said during the May 22 meeting that the legislation needed more community input and was open to revising it.

He said then that his intent was not to prohibit dock owners from renting out their slips.

“This is simply to eliminate people making commercial areas behind their homes,” he said, noting traffic and safety concerns.