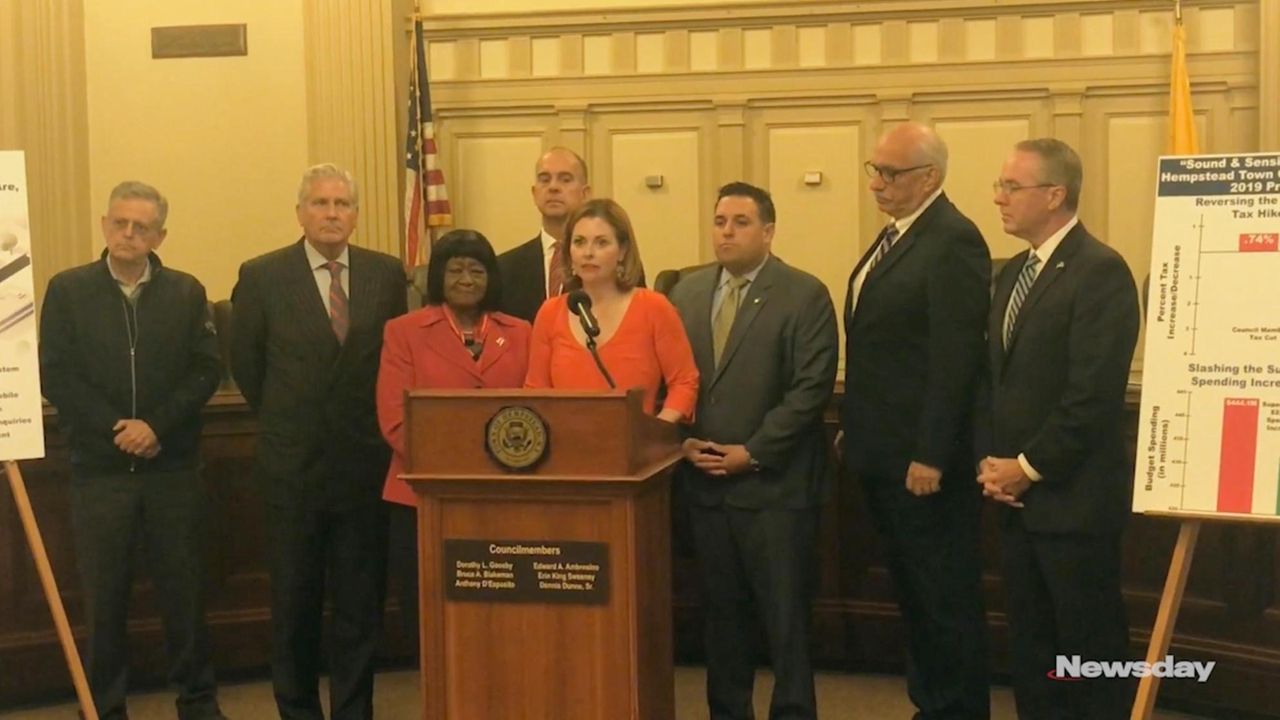 Weeks after Laura Gillen proposed her first Hempstead Town budget as supervisor, the Republican-controlled town council on Monday presented its own spending plan for 2019 that members said includes lower taxes and expenditures.

The $432.5 million budget put forth by the council would trim $11.6 million from Gillen's $444.1 million budget and reduce taxes by 3.46 percent from last year’s rates, council members said Monday morning.

"The town seeks to regain the valued trust of its residents by cutting taxes and spending," Councilwoman Erin King Sweeney said at a news conference, flanked by the four other Republican council members, Senior Councilwoman Dorothy Goosby, a Democrat, and Tax Receiver Don Clavin.

The town board, which is composed of the six councilmembers and Gillen, then voted 6-1 at a meeting to adopt the tentative budget as amended by the council. Gillen voted against the amended budget, which she said she had not seen before the meeting.

“The town council has created a fiscally irresponsible budget, crafted in secret, that keeps the Town of Hempstead in the dark ages,” she said in a statement.

Gillen said the council’s budget may require a tax increase in the future.

John Mastromarino, a financial consultant for the town council who worked on its budget, said the bulk of the spending cuts come from about $6 million in anticipated savings in salary costs from retiring employees.

The council’s budget also cuts spending on outside legal fees and workers' compensation premiums, he said.

Gillen said it was imprudent to rely on retirement savings without knowing for certain how many employees will retire next year.

The council also proposed creating an Office of the Compliance Officer to review town contracts and an Office of Veterans Affairs and Public Health.

The council’s proposed budget, while smaller than Gillen’s, is still about $13.7 million larger than the town’s adopted 2018 budget of $418.8 million. Mastromarino said the town would draw on a projected budget surplus to cover the additional spending.

The council’s proposal also projects some revenue increases, such as $600,000 more from park fees. Mastromarino said this would come from doubling park fees for nonresidents, such as parking at town beaches.

The board also voted to reschedule public hearings on the preliminary budget to Oct. 30 at 2:30 and 7 p.m.

Long Beach man sues police, city for $25M over Trump, Biden flags
1:37
When was the last time you saw a dentist? COVID-19 fears take toll on care
State: Virus positivity rate at 1.27%, the lowest since Oct. 22
Dear Sal: The NFL likes the way you play
72 reasons why Long Island loves Billy Joel
1:29
Officials: Trash facility blaze contained but hotspots a concern
Didn’t find what you were looking for?