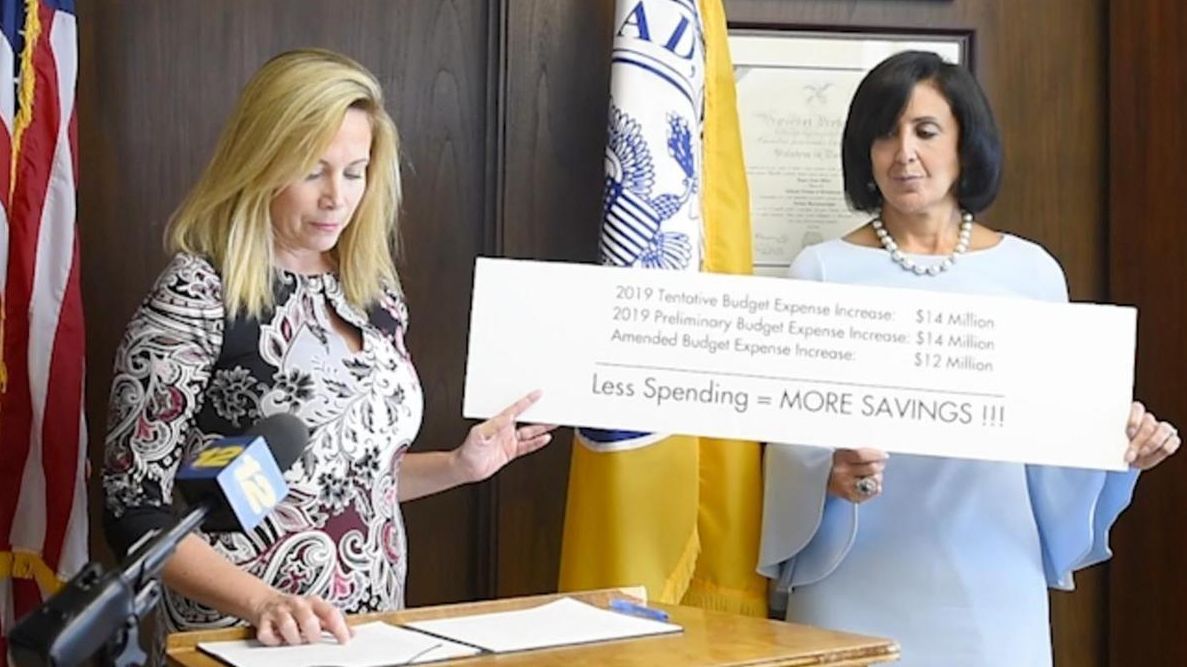 On Tuesday, Hempstead Town Supervisor Laura Gillen discussed amendments she made to the budget and addressed issues she and her council disagreed upon.  Credit: Johnny Milano

Hempstead Supervisor Laura Gillen and town board members are seeking a compromise on a proposed 2019 budget, but remain divided on about $11 million in projected savings from retirements.

Gillen responded Tuesday to the town board’s proposed amendments to her $444.1 million budget. The board's revised $432.5 million would cut spending by $11.6 million, but relies on nearly the same amount in savings from 100 projected retirements next year.

Gillen’s compromise called on cutting $2 million in spending by reducing mailings, legal fees and workers' compensation payments. She said it would cause the tax rate to remain flat, but residents could see an average decrease in taxes of 2.39 percent.

“I believe our budgets are not that far apart,” Gillen said. “I’m hoping we can reach a joint agreement on a single budget proposal by Oct. 30.”

Town board members proposed amendments during an Oct. 15 special meeting to cut taxes by 3.46 percent.

Gillen’s initial budget called for a 0.74 percent tax increase, but said the tax rate would result in savings for 83 percent of homeowners because the bulk of the tax increase would be borne by special districts.

King Sweeney and Gillen remain divided on key provisions in the budget, such as savings from projected retirements and cutting publication of town meetings and notices in local newspapers, which King Sweeney said would save $400,000 annually.

"The council is committed to returning as much savings to the taxpayers . . . I don’t believe in squirreling away money, ” King Sweeney said.

Gillen argued that the retirement savings did not account for separation payouts and would force the town to raid its reserves or increase taxes next year. King Sweeney said the board is committed to restoring money to the town's rainy day fund.

"Where we differ and where I'm hoping to see compromise from the board, is the town council's plan to prematurely count savings in the budget by guessing the number of employees to retire next year before it even happens," Gillen said.

Gillen and the board have yet to meet on budget negotiations, except during board meetings. Gillen said the board has rejected her overtures in drafting a budget since July. King Sweeney said she offered Friday to set a "mutually convenient meeting" to address the budget, but has not gotten a response.

"While I have not heard back as of yet, I remain hopeful that she will take advantage of the opportunity to strike common ground on the budget for the benefit of the township's taxpayers," King Sweeney said.