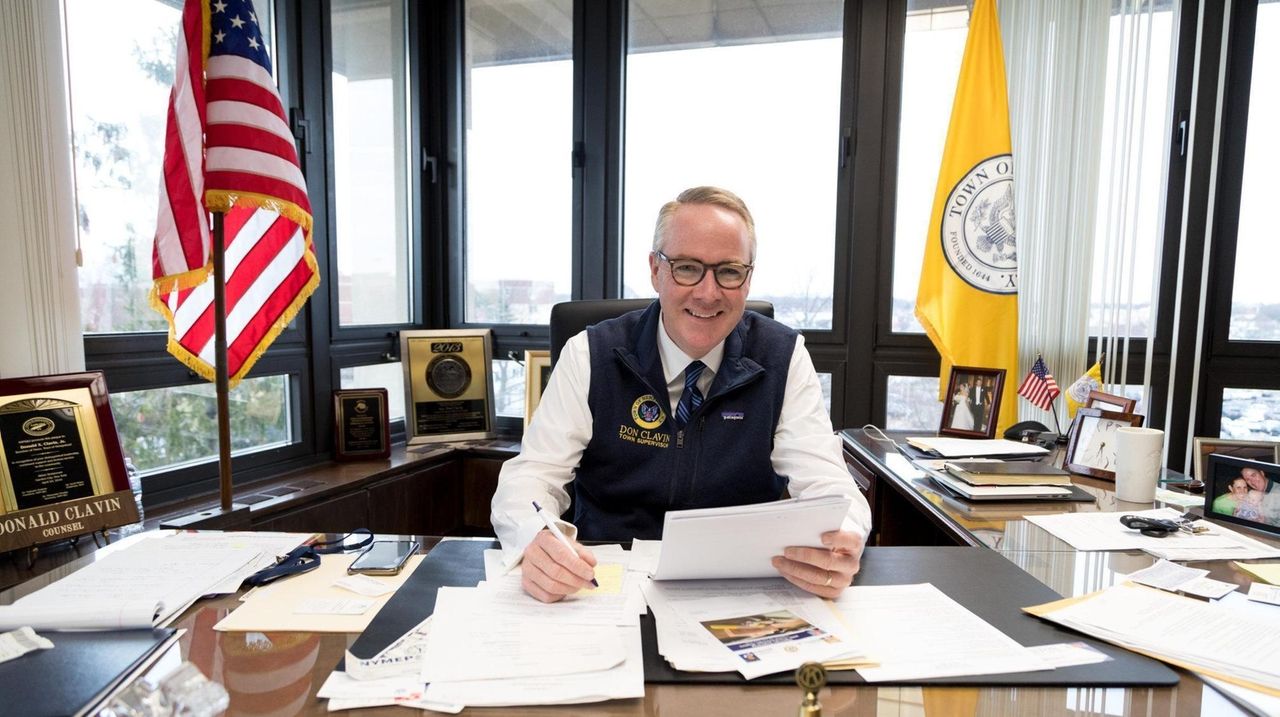 Newly elected Hempstead Town Supervisor Don Clavin said on Jan. 14 he is focused on fulfilling campaign promises, and noted he has already checked one of the list: cutting the budget of the supervisor’s office by half. Credit: Barry Sloan; File Footage Danielle Silverman / Photo Credit: Kendall Rodriguez

Newly elected Supervisor Don Clavin said he envisions an end to the political rancor that rocked Hempstead Town Hall in recent years, but he offered few specifics about his positions on some key issues in an interview shortly after taking office in January.

“The politics are behind us,” Clavin said as he sketched out plans for his first two-year term, which include overhauling the building department and reducing the number of “take-home cars” used by staffers.

Clavin was less firm on other topics, including contentious development proposals and controversial town contracts that have drawn scrutiny from law enforcement.

Those contracts and other alleged ethical lapses in the traditionally Republican town government were a focus of Laura Gillen, Clavin’s Democratic predecessor. Her surprise electoral victory in 2017 wrested Hempstead’s supervisor office from GOP control for the first time in more than a century. But her efforts to paint Clavin, a Republican, as beholden to his party during her 2019 reelection campaign proved unsuccessful.

Now, with a Republican back in Hempstead’s highest office and a 6-1 GOP majority on the town board, a key question going into Clavin's first term is whether he defies Gillen’s characterization and governs independently, veteran Albany lobbyist Desmond Ryan said.

“Machine party politics has always been an issue for Hempstead. It is probably one of the last Republican machines left, not only in New York State, but in the nation,” Ryan said. Clavin is “going to have to show that there’s a sense of independence when it comes to the party versus town hall.”

“The boogeyman of the Nassau GOP controlling everything just doesn’t exist,” he said.

Instead, Clavin said he is focused on fulfilling campaign promises, and noted he has already checked one off the list: cutting the supervisor’s budget in half.

Other campaign pledges are works in progress. Clavin’s campaign website says he would call for “the elimination of all take-home vehicles” for appointed officials. Clavin said the town has collected the cars and is evaluating whether staffers legitimately need them.

Clavin also called for the resignation of appointed department heads, and said he’s received offers from each. But nearly all are still working, he said, as the board evaluates their performance. Parks Commissioner Daniel Lino will retire Feb. 21, however. The board appointed a replacement Feb. 4.

On other issues, Clavin offered few details about his positions or intentions, and stressed the importance of consensus among residents and other board members.

He did not say whether he supports a controversial plan to subdivide a Woodmere golf course, saying: “I think it comes down to the community — how does the community feel?” He said Hempstead’s Building Department — a frequent subject of Gillen allegations of corruption and ineptitude — “needs to be overhauled,” but declined to reveal specific reforms he is considering.

He did not state his position on town contractors who faced scrutiny during the Gillen administration for amassing debts to the town and paying Joseph Cairo, a former Hempstead councilman and now the chairman of the Nassau County Republican Committee, for work related to Hempstead properties.

The U.S. Attorney for the Eastern District of New York subpoenaed the town in August for records on Dover Gourmet Corp., which runs two town facilities in Lido Beach, following a Newsday report on the $531,400 in unpaid rent it owed Hempstead at the time. Dover disputes the debt and is in litigation with the town.

Clavin did not say whether he agrees with Gillen that Dover’s contract should be annulled, saying he is awaiting the conclusions of the litigation and investigation.

Clavin also reserved his opinion on Double Eagle Golf, which ran the town’s Lido Beach golf course for 20 years, citing ongoing litigation between the town and company. Gillen opposed settling with Double Eagle because of $922,800 the contractor had paid a company controlled by Cairo for consulting work at the course.

Both cases played into Gillen’s contentions of widespread malfeasance in the town. So did a Nassau County district attorney investigation into the Building Department, the April conviction of former town Councilman Edward Ambrosino on tax evasion and the September indictment of Deputy Building Commissioner John Novello on grand larceny charges. Novello pleaded not guilty.

But Clavin said the town does not have a systemic ethics problem.

“The majority of people who work in this town are good, hardworking, honest people,” he said. “Like anything in society, you’re going to have some people that are ethically challenged,” but “it’s not a town issue, it is a personal, moral issue.”

“When you don’t have a check-and-balance system, bad things happen,” Gillen said.

She expressed little optimism that Senior Councilwoman Dorothy Goosby, the board’s lone Democrat, would serve as a check on Republicans.

Goosby, for her part, said she does not see that as her role.

“When I'm elected, I'm no longer a Democrat, I'm a member of the board,” Goosby said. She declined to say whether she voted for Gillen or Clavin.

Gillen’s anti-corruption zeal led to her 2018 lawsuit against the board over layoff protections for union workers and personnel moves the board passed shortly before she took office. The suit undid the layoff protections but fostered open hostility among board members, which stymied her agenda.

Whether the brief Democratic control of Hempstead’s top office proves an aberration or a sign of change in the town’s electoral landscape remains to be seen.

Voter registration statistics provided by the Nassau County Board of Elections show Democrats now have a 57,000-person advantage over Republicans in the town. But more important than voter registration is voter turnout, said Michael Dawidziak, a pollster and political consultant based in Sayville. In the 2019 supervisor race, for example, the statistics show only a few hundred more Democrats than Republicans voted.

“Back in the day, Republicans always won basically,” Dawidziak said. But “demographics are changing, and these races are going to be competitive into the foreseeable future.”