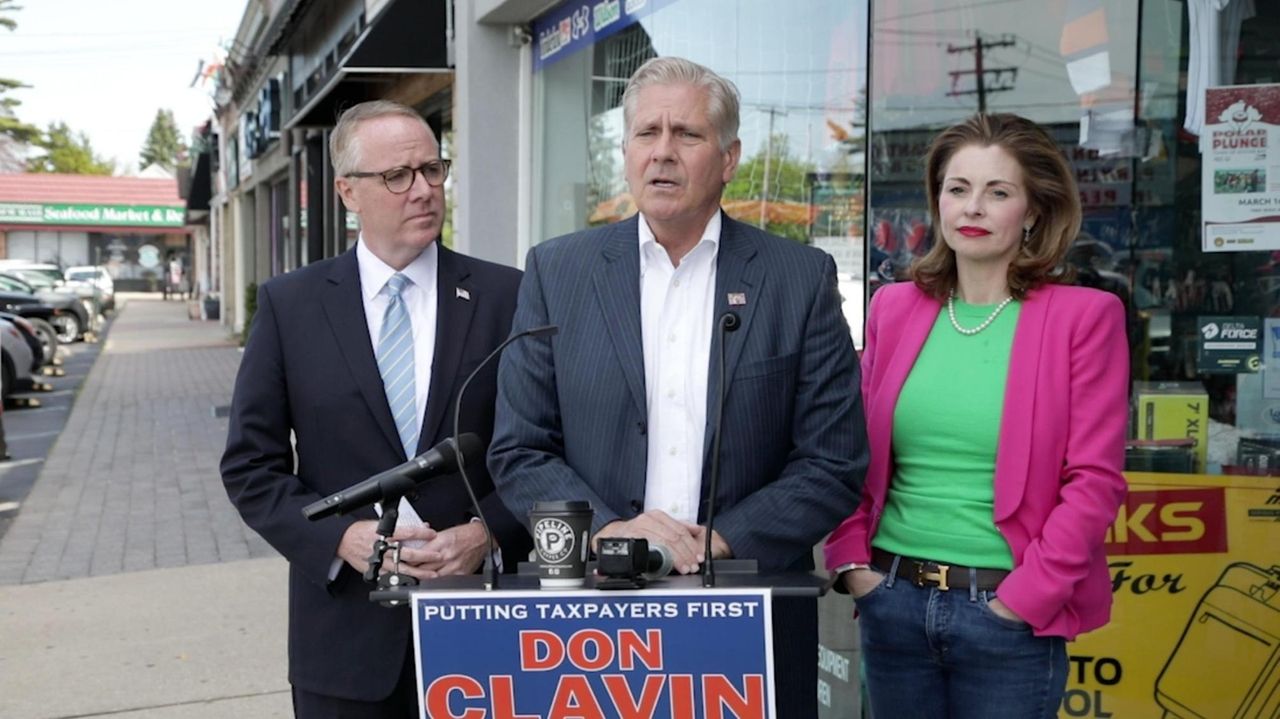 Erin King Sweeney and Bruce Blakeman endorsed on Monday town Tax Receiver Don Clavin in his bid to unseat Democrat Laura Gillen in the race for supervisor this fall. Both Republican council members had previously broke ranks and backed Gillen in her 2017 run for office.  Credit: Newsday / Yeong Ung Yang

The endorsements marked a reversal from the 2017 supervisor's race, when King Sweeney and Blakeman broke ranks with their party by declining to endorse Republican Anthony Santino in his re-election campaign. Blakeman even endorsed Gillen instead, who in turn appointed him her deputy supervisor.

King Sweeney said Clavin's tax information forums for residents and regular participation in community events in Garden City, where he lives, have made him a ubiquitous presence in the town.

The endorsements may further unravel relations on the divided town board, on which the Republican majority typically votes in a bloc to pass legislation over the objections of Gillen.

The divide was deepened last April, when Gillen sued the board over layoff protections for union workers and close to 200 transfers of town staffers passed by the town board shortly before she took office.

A judge issued a split ruling in the suit in March, ordering that the no-layoff clause be voided but that personnel moves were legal.

Clavin, in welcoming the endorsements Monday, said he would bring a "change of attitude" to the office if elected. "This is about good services, tax relief, and working with colleagues, not fighting them, not suing them."

Clavin criticized the size of Gillen's staff, and said he would cut the budget of the supervisor's office by $1 million if elected.

Nassau County Democratic Committee spokeswoman Kim Devlin dismissed the endorsements in a statement, saying, "Hempstead Republican machine politicians are circling the wagons around one of their own so they can return to a culture of cronyism and patronage on the backs of taxpayers."

Despite the fraught dynamic on the town board, relations between King Sweeney, the board's Republican majority leader, and Gillen appeared to improve in recent months, with the two holding rare joint news conferences and King Sweeney announcing her opposition to appealing the ruling in Gillen's lawsuit.

King Sweeney said Monday her endorsement of Clavin would not prevent her from maintaining her professional relationship with Gillen.

"As far as working with the supervisor, of course I'll continue to do it. There's no drama," she said.

Blakeman said he was not concerned about whether his endorsement of Clavin would lead Gillen to oust him as deputy supervisor and appoint someone else in his place.