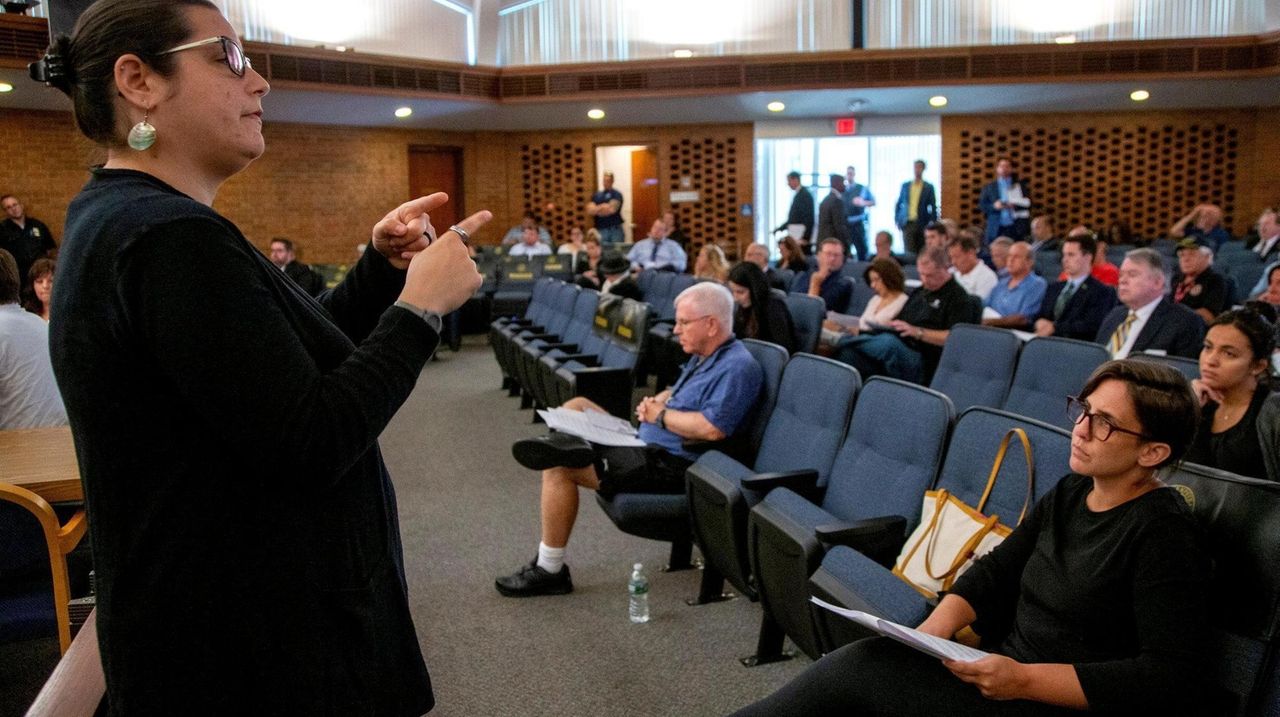 With a town board divided along partisan lines and an audience of outspoken regulars, the meetings of the Hempstead Town Board can get acrimonious. Few know that better than the sign language interpreters tasked with standing before the gathered public and translating all the bickering, accusations and admonishments for the local deaf community.

"Sometimes it does gets heated, sometimes it doesn't," said Sandra Blum, one of the town's regular interpreters, as a recent meeting passed the two-hour mark. "We're interpreting either way."

The real-time translations of local government business is becoming more common on Long Island, according to officials from Mill Neck Interpreter Service, the Mill Neck-based nonprofit contracted by Hempstead since 2016.

"Long Island has grown tremendously for interpreting services," said Lindsay Byrne, Mill Neck's department manager. "Locally the deaf community is speaking up in regard to [their] rights."

Blum, an interpreter liaison at Mill Neck, said Hempstead meetings aren't the only assignment that involves interpreting rancorous speech. But they're likely longer than the average job, often clocking in at four hours or more.

"At the Town of Hempstead, it's constant," said Blum, who switches off with another interpreter every 20 minutes at the meetings. "There's a lot of talking, a lot of communication happening."

She said she relies on "facial grammar" and body language to convey the often impassioned speech that characterizes many Hempstead board meetings.

At a meeting in July, Blum frowned as she signed a public speaker's denunciations of proposed revisions to the town ethics code as "inept." Hours later, she arched her eyebrows while translating an argument among board members about a proposed building department audit that featured accusations of hypocrisy and procedural shenanigans. An hour after that, Blum shrugged her shoulders slightly while signing the recommendation of a public speaker that comments from board members be subject to time limits, "because they are taking time from our lives, which I find very weary."

Mill Neck officials said the company also provides interpreting services to Suffolk and Nassau counties as well as other Long Island towns and a number of local school districts.

Blum said she does not know whether any deaf or hard-of-hearing people attend Hempstead's meetings. But she noted that the interpreters appear in the live streams and archived videos of the board meetings on the town website.

One way or another, the work of Blum and other interpreters opens up the sometimes messy workings of government to a community that might not have previously have been able to participate as easily.

"You've got to know what's going on in your town," Murray said. "If you don't know, how can you effectively be a citizen?"