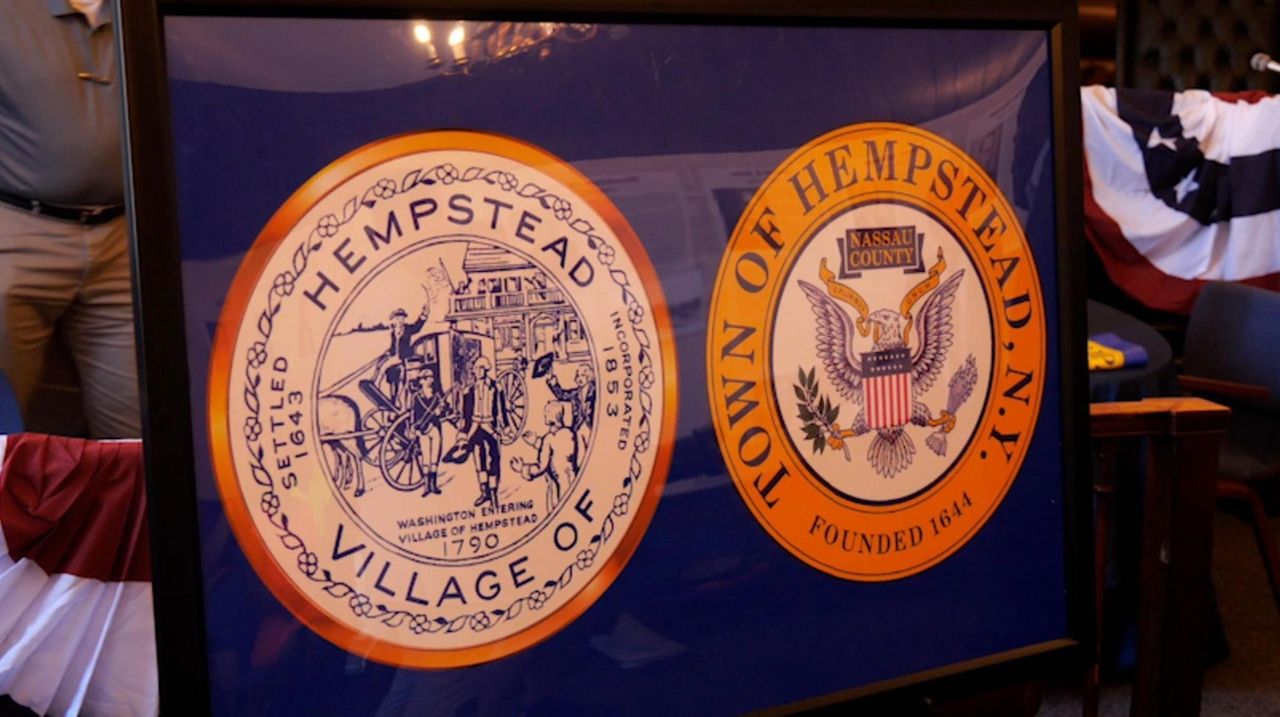 Hempstead Village Mayor Don Ryan presented a plaque to historian Roger Hands, of Hemel Hempstead, the sister town in England from which Hempstead received its name in the 1600s.  Credit: Jim Staubitser

Beside the name they have in common, few things link Hemel Hempstead, a town of about 95,000 residents 25 miles outside of central London, to its New World namesakes on Long Island.

Except for Roger Hands.

Hands may be one of the few people with firsthand knowledge of both Hemel Hemptead, where he has lived since 1963, and the Village and Town of Hempstead on Long Island, which he has visited for decades, most recently last week.

"Both of them come across as pleasant places," said Hands, 82, a local historian who previously had a nursery and landscape contracting business. "I don't actually believe there's too much difference."

Hands' latest visit to Hempstead, New York, was perhaps the most impressive, he said, as town and village officials threw a celebration in his honor.

"We would like to feel that Mr. Roger Hands and anyone from Hemel Hempstead would be at home here in the Village of Hempstead," Mayor Don Ryan said at the event, which involved numerous breaks for photographs and the exchange of gifts.

Hands, an emeritus trustee of a local land trust in Hemel, said he was humbled by the pageantry.

"It's a day that's terribly important to me," he told the assembled officials in a speech in which he apologized three times — once for arriving without a formal jacket, which he left in a car, and twice for speaking at length.

After the ceremony and a visit to the nearby St. George's Episcopal Church, Hands delineated the similarities and differences he had observed between the two Hempsteads.

"Approaching where we were today, I came through similar countryside and roads as back in England," said Hands, who was staying with his son in New Jersey. "The only thing I didn't see were grazing animals."

Hands noted, however, that a book he had reviewed in the town archives showed cattle grazing on Long Island centuries ago that resembled the Belted Galloway cattle of his home region.

"But that's just a strange coincidence," he said.

The name shared by the Hempsteads likely traces back to John Carman, a Hemel Hempstead native and one of the founders of the village in the 1640s, according to village historian Reine Bethany. Since then, little has continued to bind the two communities, officials from both municipalities said.

Rob Beauchamp, a councillor who represents Hemel Hempstead Town in the Dacorum Borough Council, said in a phone interview that he had not been aware that there even was a community in New York named after his hometown, and most Hemel residents likely are not either.

"It doesn't surprise me," he said, however. "I come from Plymouth in the West Country. You have a Plymouth" as well.

Hands said it was curiosity that likely first brought him to Long Island's Hempstead. He said he was happy to continue to serve as a bond between the places.

"Today was very pleasing to meet people with the same commitment to the local community," he said. "The community doesn't happen automatically. Communities only progress if people contribute to that progression."