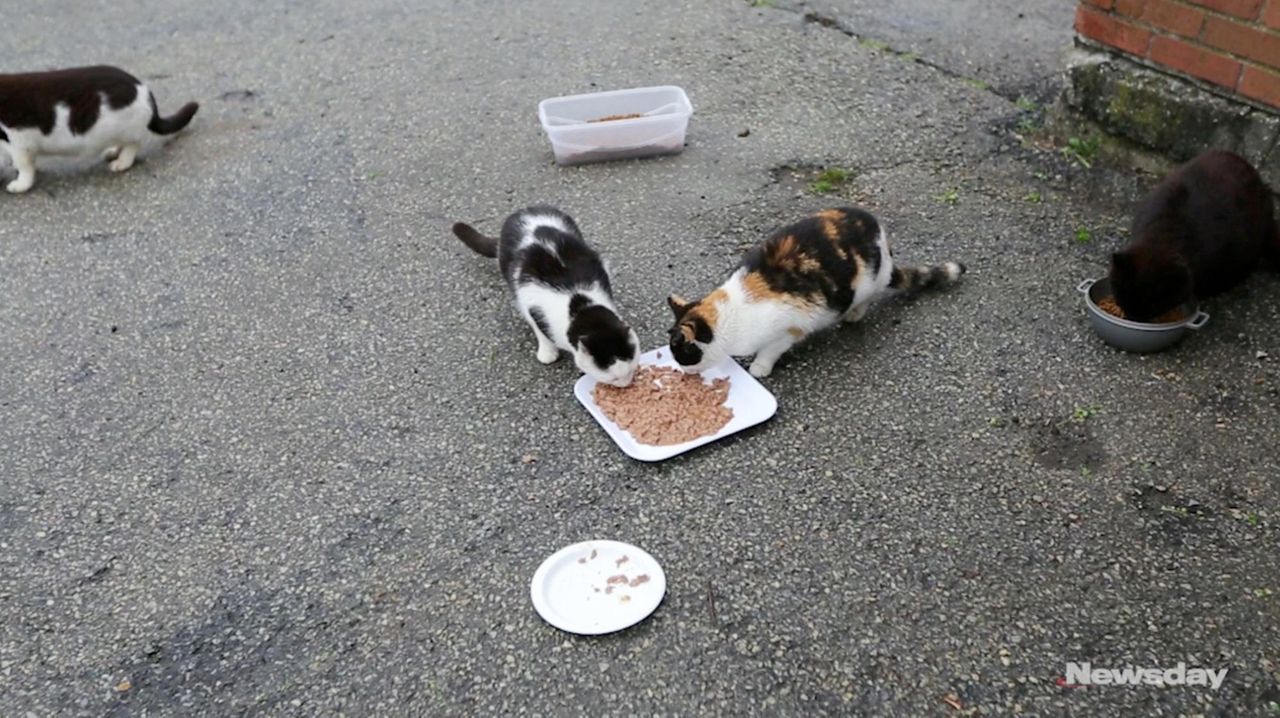 A feral cat colony's residency at the landfill in Oceanside has become part of a lawsuit in the Town of Hempstead. On April 30, Rich Spiotta, a Hempstead Town mechanic, explained how despite the ongoing dispute he continues his daily ritual of feeding and caring for the cats. Credit: Barry Sloan

A lawsuit has ensnarled the Town of Hempstead, its former supervisor and a retired sanitation worker in a yearslong legal battle over First Amendment rights, an alleged political vendetta and a feral cat colony at a landfill in Oceanside.

Hempstead Town mechanic Rich Spiotta tries to stay out of all that. He just feeds the cats.

As the lawsuit drags on — the plaintiff, Stanley Lombardo, filed an amended complaint last month — Spiotta has quietly continued his daily ritual of feeding and caring for the 20-odd calicoes, tabbies and other cats that have lived at the capped landfill and waste transfer station for years.

The job, which has earned Spiotta the nickname "catman" among co-workers, is not one he wanted, necessarily, but it's one that he accepts.

"Once I made the commitment to take care of them, I was going to do that," he said one recent morning. "I had to."

Spiotta, 53, of Massapequa, was scooping cat food pellets into plastic containers, as he does every weekday before heading to a town garage in Merrick where he repairs the engines of lawn mowers and four-wheelers.

"I've been doing this for eight years," Spiotta said, setting the bowls down outside the straw-filled shipping container that serves as the cats' home. The animals appeared from behind old tanks and slabs of concrete and approached the bowls.

"My mom, when she was alive, she used to feed a whole bunch of stray cats in her apartment complex in Queens," Spiotta continued. "I guess it's genetics."

Spiotta isn't the only one who has tended to the colony.

Lombardo, 65, said he worked in the town sanitation department for 29 years and served as the cats' primary caretaker from 2014 to 2016. He retired in 2016, but said he continued to look after them until the spring of 2017, when his former co-workers at the landfill told him they had instructions to not let him on the property.

Lombardo blames then-town Supervisor Anthony Santino for the change, citing a falling-out between the two over old political disputes in East Rockaway Village, where both were previously trustees.

"It was political retribution against me and my family," Lombardo said.

Lombardo alleged as much in a lawsuit he brought against the town, Santino and town sanitation superintendent Thomas Metzger in August 2017. By preventing him from feeding the cats, the suit argued, the town was violating Lombardo's First Amendment rights.

A judge dismissed the complaint in March, although he invited Lombardo to submit an amended complaint, which Lombardo did on April 26.

Santino said in a statement that he was satisfied the court saw the suit "for the politically motivated, bogus nonsense that it is.”

In the meantime, Spiotta has continued to tend to his flock of strays, spending around $200 a month of his own money to keep them fed. Most of the cats have been spayed or neutered by now as well, he said.

Lombardo and others have voiced concern about the cats' welfare. The Nassau County Society for the Prevention of Cruelty to Animals inspected the site and found the cats to be safe, Nassau SPCA president Gary Rogers said. They are likely pets that wandered off or their descendants, he said.

Spiotta said caring for the animals keeps them out of neighbors' yards. It's also the right thing to do, he said.

"They didn't ask to be born into this environment. So it's the least we can do, to give them a decent life."