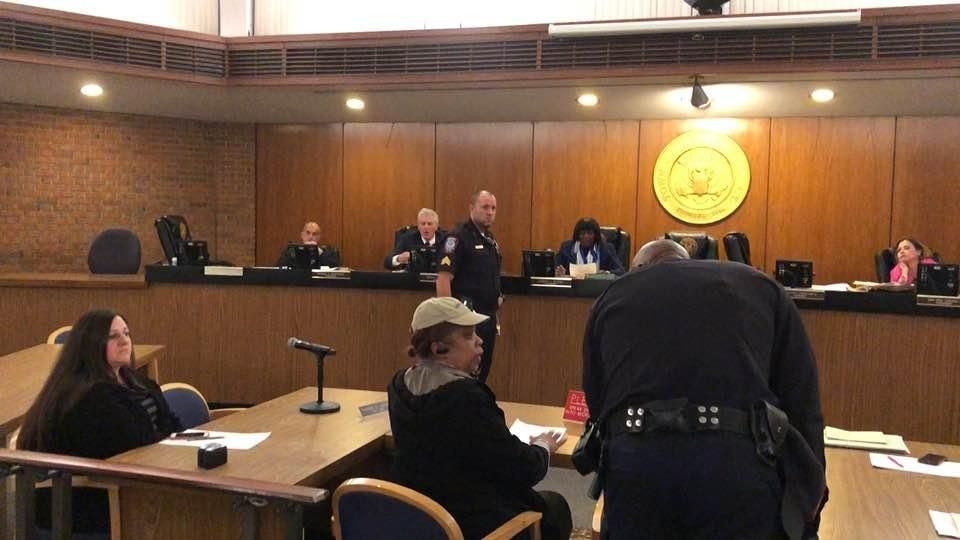 Hempstead Councilwoman Dorothy Goosby threatens to remove resident Meta J. Mereday when she refuses to stop speaking during public comment at the Nov. 28 board meeting, while discussing the transition for the new town supervisor. Councilman Bruce Blakeman intervenes during the discussion. (Newsday / John Asbury)

Hempstead Town Supervisor-elect Laura Gillen has tapped a managing partner of her Uniondale law firm to head her transition team.

“I want to bring in a new era to the Town of Hempstead,” Gillen said in a phone interview Monday.

None of the team’s members personally donated to Gillen’s campaign, according to a review of state campaign finance records. Gillen, who is to be sworn in Jan. 2, was a commercial lawyer for Westerman Ball Ederer Miller Zucker & Sharfstein, LLP. She stepped down right after the election and she has appointed John Westerman, a managing partner and chairman of the firm’s bankruptcy, workout and restructuring department, to lead her team.

“He wants nothing in return for taking on this role,” Gillen said, noting he will serve as a volunteer in the position.

Voter registry records show Westerman, of Oyster Bay, has registered both with the Republican and Independence parties in recent years. He and Gillen have worked together for more than a dozen years.

“I think she’s honest and she’s a really hard worker and she’s smart. We can use more people like that in public service these days,” Westerman said. “When it comes to local politics, party’s not that important.”

Thomas Garry, chairman of the transition team for Democratic County Executive-elect Laura Curran, is a managing partner at Harris Beach.

Gillen said Monday that her goal is to bring in staff “without regard to political affiliation.” Her transition team will reach out to Hempstead Town Attorney Joe Ra and outgoing Supervisor Anthony Santino’s administration to begin the process.

She said her first priority will be “transparency and cleaning up any corruption in Town Hall” and will begin by archiving videos of town board meetings online. The meetings are currently only live-streamed.

John Durso, president of the Long Island Federation of Labor

David Kilmnick, president and chief executive of the LGBT Network

Vincent LeVien, director of external affairs for the Roman Catholic Diocese of Brooklyn

Julie Marchesella, former president of the Nassau Council of Chambers of Commerce

Jim Montes, assistant dean for the Office of Career and Professional Development and director of the Office of Diversity and Inclusion at Touro Law Center

Experts: Supervisor needs a coalition to leadOn a governing board with seven members, the magic number is four.Less than two weeks ... Town OKs changes against supervisor-elect's requestThe Hempstead Town Board voted Tuesday to approve 18 personnel matters and entered into at ... Search Hempstead Town salariesSee who was employed by the Town of Hempstead in 2017 and how much they earned.