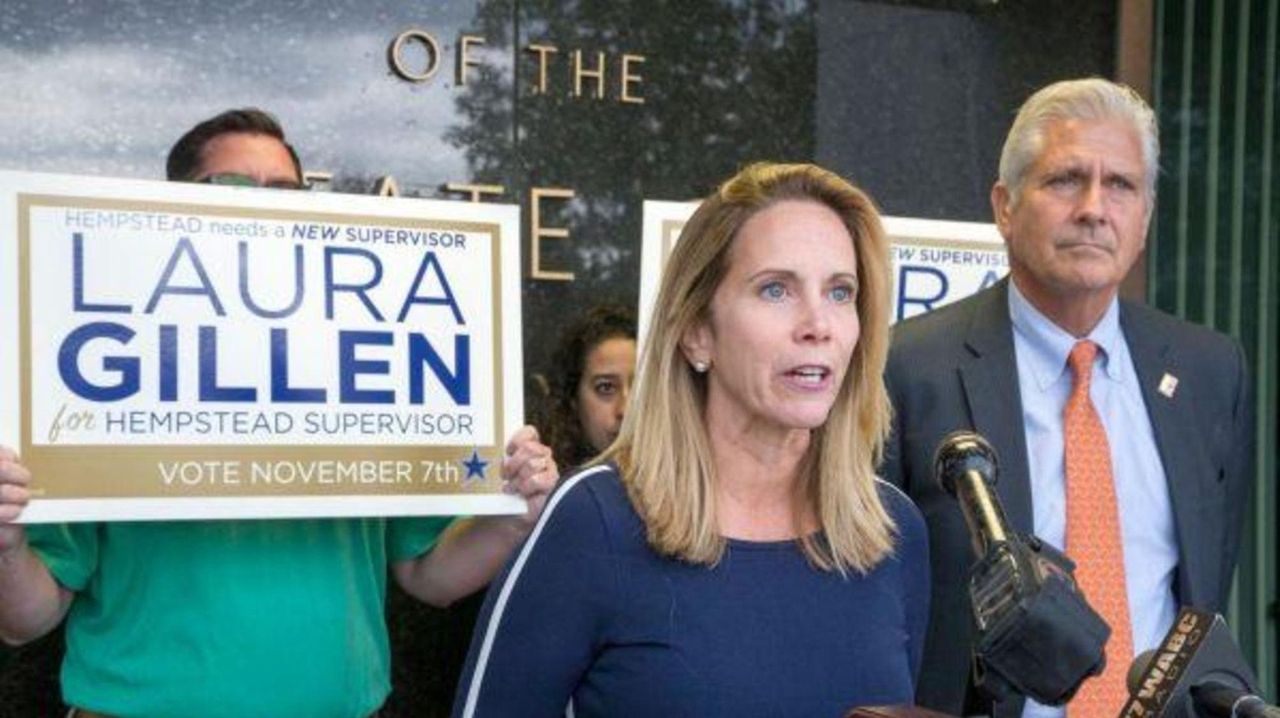 Hempstead Town Councilman Bruce Blakeman broke with the Republican Party on Thursday, Oct. 26, 2017, to endorse Laura Gillen, the Democratic candidate for supervisor. The endorsement follows continued infighting on the Hempstead Town Board where Blakeman and Councilwoman Erin King Sweeney have challenged actions by incumbent Supervisor Anthony Santino, all of whom are Republicans. Credit: Newsday / Stefanie Dazio; Howard Schnapp

Hempstead Town Councilman Bruce Blakeman broke with the Republican Party Thursday to endorse Laura Gillen, the Democratic candidate for supervisor, less than two weeks before the election in the GOP’s stronghold on Long Island.

The endorsement follows continued infighting on the Hempstead Town Board where Blakeman and Councilwoman Erin King Sweeney have challenged actions by Supervisor Anthony Santino, all of whom are Republicans.

“I cannot in good conscience support Tony Santino for supervisor,” Blakeman, who was appointed to the town board in 2015, said Thursday in a news conference outside the Nassau Supreme Court with Gillen. “His short tenure as supervisor has brought cronyism and featherbedding to levels that are unprecedented.”

“Councilman Blakeman knows that this race is not about Democrat versus Republican,” she said at the news conference. “It is about nothing less than good government versus tyranny.”

Blakeman, who said he is supporting the rest of the Republican ticket in the Nov. 7 election, is the former presiding officer of the Nassau County Legislature and the party’s unsuccessful nominee in multiple races.

Santino responded in a statement: “Just as Blakeman was rejected by the voters on four separate occasions — for county legislature, state comptroller, U.S. Senate and U.S. Congress — I am confident that his petty, personal, and groundless attacks on me will be similarly rejected on Election Day.”

Matt Coleman, Santino’s campaign spokesman, watched and recorded the news conference on a cellphone. He was at the courthouse Thursday for jury duty.

“I am disappointed in any elected official from our party who would let personal feelings take priority over Republican principles, especially someone who has been given so much support by the party,” Mondello said.

Blakeman and King Sweeney for months have been calling for the creation of a town inspector general and for ethics reform. Santino proposed ethics legislation that did not include the inspector general post but did have an outside income cap — which Blakeman and King Sweeney said is aimed at preventing them, both lawyers, from running for re-election. Santino’s ethics law passed but its status is unclear because of a recently discovered error in its public notice.

Recent town board meetings have also become chaotic, with Blakeman and King Sweeney shouting from the dais as Santino and other town board members walked out earlier this month as Blakeman was still speaking.

Blakeman has also criticized Santino previously on Facebook, comparing him to North Korea’s dictator, Kim Jong Un, and calling him a “tyrant” who “operates in secret and rules by intimidation and bullying.”

Santino’s campaign on Thursday sent out an email touting a cross-party endorsement by former state Assemb. Phil Goldfeder (D-Far Rockaway) in his bid to retain the supervisor’s seat.