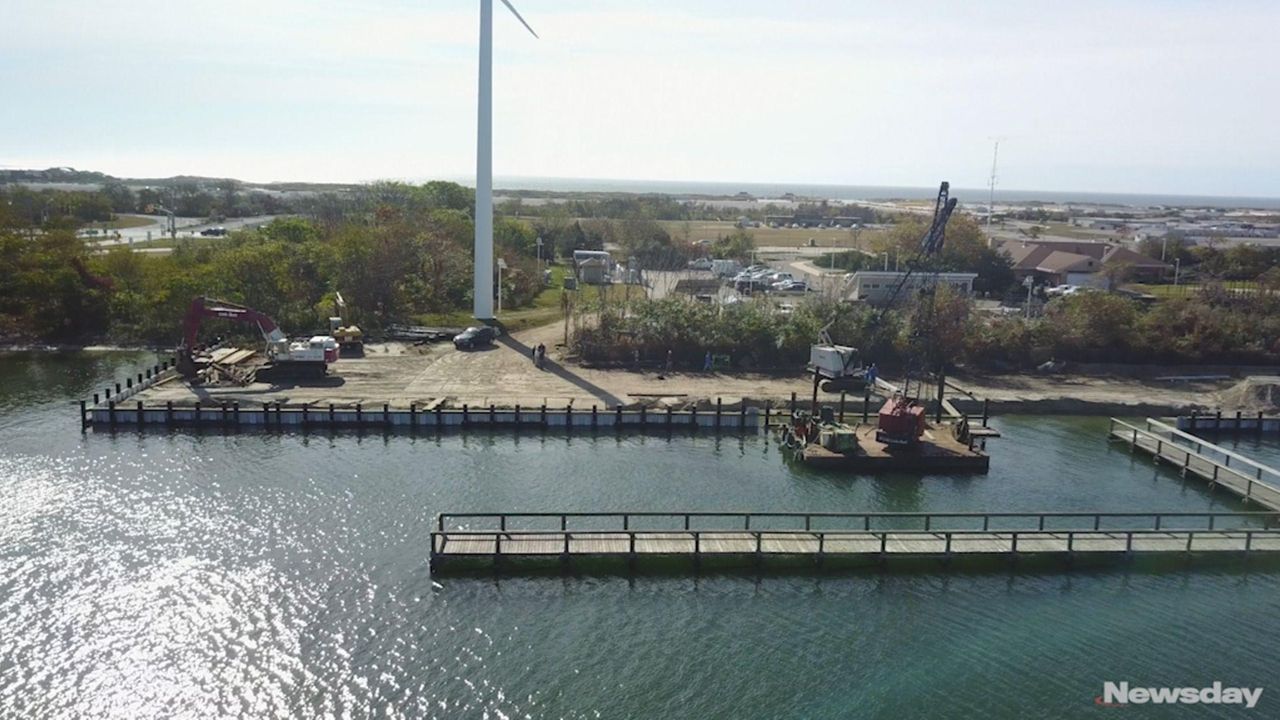 On Monday Oct, 23, 2017, Hempstead Town Supervisor Anthony Santino announced the restoration of the superstorm Sandy-damaged protective sea wall in Point Lookout, accomplished using town workers instead of private sector contractors.  Santino said the use of town workers will save the town over $500,000. Credit: Newsday / Jeffrey Basinger

Hempstead Town Supervisor Anthony Santino and three other members of the town board on Monday touted the replacement of a superstorm Sandy-damaged bulkhead in Point Lookout.

Councilwoman Erin King Sweeney, who represents the hamlet, was not invited to attend the news conference announcing the status of the project, even though she said she worked on it.

The move builds on disputes between King Sweeney and Santino, both of whom are Republicans, that have lasted for months ahead of the Nov. 7 election when Santino is running for re-election.

“I think there’s a proven track record of the supervisor excluding me from events in my district over the last 18 months with a few exceptions,” King Sweeney said Monday afternoon. “I just think it’s further proof that the supervisor is playing politics. He is vindictive and it’s retribution for me having an independent voice.”

Santino appeared in Point Lookout Monday with senior Councilwoman Dorothy Goosby and Councilmen Anthony D’Esposito and Dennis Dunne Sr., all of whom are also running to keep their seats on the town board.

“The issue of storm recovery is not exclusive to any one particular district,” town spokesman Mike Deery said in a statement after the news conference. “The supervisor included those members who have worked with him on storm recovery.”

But King Sweeney said she’s had conversations with the commissioner of conservation and waterways about worker training for the Point Lookout project and also has been involved in other storm preparedness issues.

At the event, Santino said 400 feet of bulkheading has been replaced along Point Lookout’s north shore, which borders Reynolds Channel, since late April. Another 300 feet is expected to be completed by midwinter, with a life span of 50 years.

“It goes a long way to protect the barrier island,” he said.

Santino said the project is to cost $315,000 because the town is using its own workforce. A private company’s bill would have run about $840,000 for the work, he said.

King Sweeney and Santino have been at odds for months, starting with the councilwoman’s call for an inspector general and ethics reform. Santino later introduced his own ethics reform legislation that included a $125,000 outside income cap, which King Sweeney has said is aimed at keeping her, an aviation attorney, from running for re-election. The ethics reform law was passed last month but Santino has said it will be brought up for a revote after an error was discovered in its public notice last week.

North Hempstead seeks input for 'third wave' of revitalization in New Cassel
2:01
Cuomo: New York adopting CDC mask guidance for vaccinated people
1:07
Modest tax breaks up for vote; 5 districts look to pierce cap
2:22
LI towns, cities get into weeds on new marijuana law
Tickets gone for Jones Beach Air Show except practice run
1:04
10 years ago, they were valedictorians. Where are they now?
Didn’t find what you were looking for?