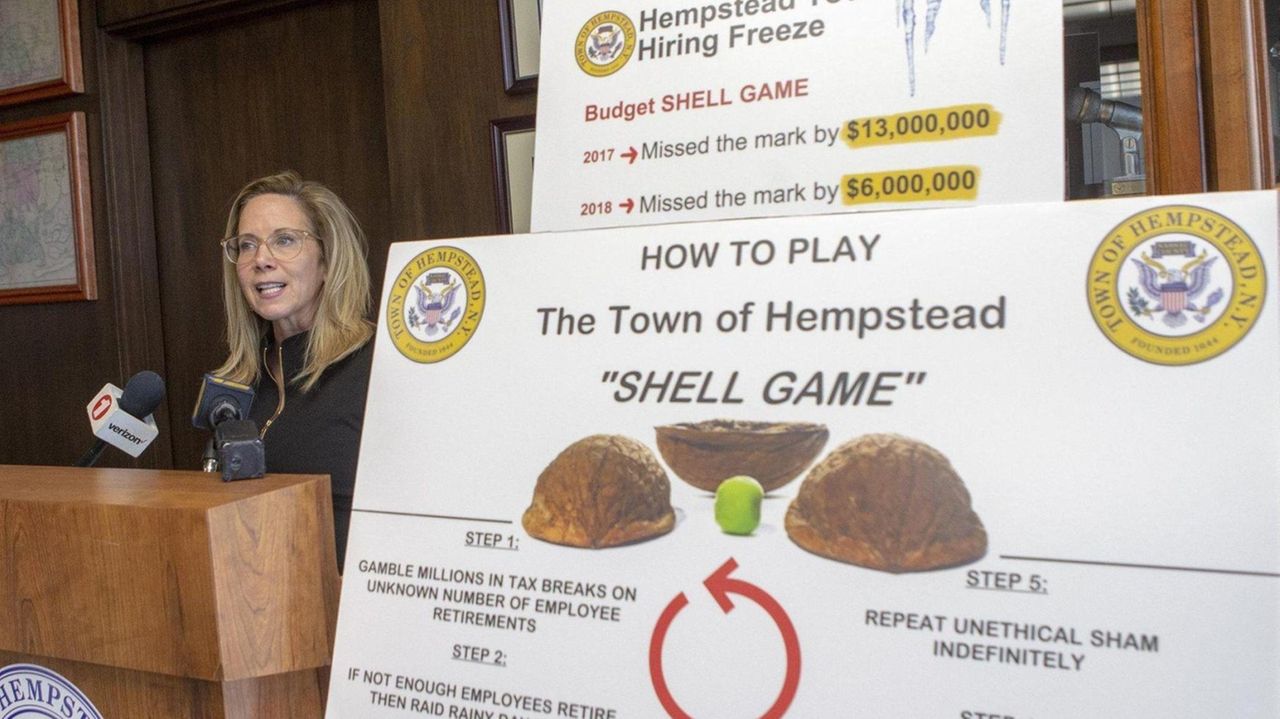 Hempstead Town Supervisor Laura Gillen Wednesday morning called for a hiring freeze after she said several positions have gone underfunded and were added to departments that cannot afford promotions and new hires. Gillen, at a news conference, said town board members have promoted, hired or given raises totaling more than $1 million so far this year. Credit: Howard Schnapp

Hempstead Supervisor Laura Gillen called for a hiring freeze Wednesday after she said board members made hires and gave raises to staff and departments that the town could not afford.

Gillen said the Republican majority town board was playing "a shell game," but board members said the personnel moves are supported by the town's budget.

Gillen directed her commissioners and department heads not to advance any raises or promotions. She said she would block and remove proposed raises, promotions and hires from town board meeting agendas because nearly $1 million in personnel moves have been made so far this year.

“The candy store is closed,” she said. “Unsupported raises are continually doled out to high-level parks supervisors, while Hempstead’s basketball courts crumble and its playgrounds rust.”

Town Comptroller Kevin Conroy said the parks department does not currently have funding for the jobs, but he expects money may become available from other departments to balance the hires. The town is also counting on retirement savings through the end of the year.

Board members also promoted Debra Pugliese, assistant to Councilman Bruce Blakeman and leader of the Baldwin Republican Club, to deputy commissioner of senior enrichment. Her salary will go up by $16,000 to $81,000 a year.

Gillen said the move threatens services such as hot meals and shuttles for seniors because there is no money in the department to support the hire.

“In short, the Town of Hempstead is living within its budget and is focused on providing the best governmental services at the lowest possible cost,” King Sweeney said.

Gillen disputed the comptroller’s findings, saying the projected savings did not account for $5 million in owed separation payments.

“The comptroller is wrong,” she said. “He’s chosen to pick sides in a shell game. He’s gone back with the majority and is touting their numbers.”

The board also postponed until September the hiring of eight part-time employees to various departments because board members said the money was not available in the budget.

Gillen said her payroll is less than that of former Supervisor Anthony Santino's office.

“Who does Supervisor Laura Gillen think she is kidding?" D'Esposito said. "After larding up her personal staff with a $2 million payroll, she now claims to be concerned about municipal hiring.”