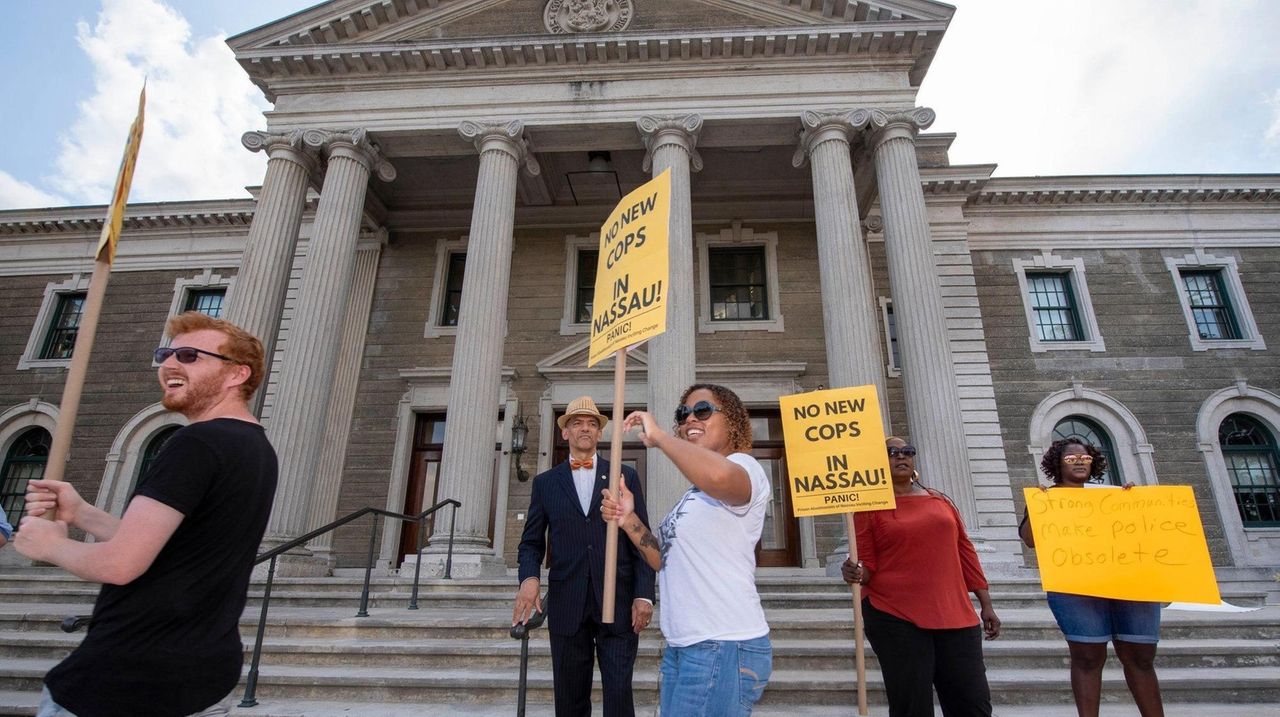 A small group gathered Saturday outside the building housing the Nassau County Legislature to protest a plan to increase policing in Hempstead Village in response to a recent uptick in homicides there. Credit: Howard Simmons

A small group gathered Saturday outside the Nassau County Legislature building to protest a plan to increase policing in Hempstead in response to a recent uptick in homicides in the village.

“Laura Curran, do we have your attention, what we want is violence prevention,” about 20 protesters chanted as they circled in front of the government building in Mineola. They carried signs that read “No new cops in Nassau!” and “End the War on Black America.” Curran is the Nassau County executive.

The protest followed an announcement earlier this month that the county and state would send patrol cars and other resources to Hempstead to help the village police department fight crime.

The activists, political organizers and village residents who attended Saturday’s protest said such measures would not mitigate crime in Hempstead. They suggested that investments in violence prevention, education and workforce development programs would be more effective at addressing the issue.

“Why are we so quick to go add more police to lock up our black people instead of adding more resources to help better our black people?” asked Shanequa Levin, co-founder of the Long Island Black Alliance.

Gov. Andrew M. Cuomo joined Curran and Hempstead Mayor Don Ryan in the village on Aug. 2 to announce the increased policing efforts. Under the plan, the state Division of Criminal Justice Services will provide training for Hempstead cops, and the state Gun Involved Violence Elimination program could help with funding for other crime-fighting initiatives such as license plate readers, video cameras and social media analysis. A State Police Mobile Command Center also has been deployed to the village to oversee operations.

The governor’s appearance in Hempstead followed a request from Curran for help from the state to stem crime in the 55,000-resident village, which has recorded six homicides this year — up from four in 2018. Violent crime is down overall in the village in the last five years.

A Nassau County spokeswoman said in an email Saturday night: “The Hempstead Community and the families and children that call it home deserve a concerted policing effort.”

“The early returns have already seen a reduction in the shootings and crime in Hempstead," she added.

A Cuomo spokesman said late Saturday: “Everyone deserves to feel safe in their neighborhood. New York will continue to provide assistance to keep communities safe at the request of our partners in Nassau County.”

“Mayor Ryan supports any assistance that reduces crime in the village,” a village spokesman said.

Rachel Silang of the Party for Socialism and Liberation said the amped-up policing could increase violence in the village.

“When we add more police to communities, what happens is more violence from the police to the community," she said.

“I don’t understand [how] this influx of police is supposed to be protection. It feels like they’re just there to intimidate us and corral us together,” she said.

Stephen Figurasmith, a member of the group Prison Abolitionists of Nassau Inciting Change, said the county may be seeking to keep its jail cells full and its corrections officers employed in response to the bail reform measures passed by the State Legislature earlier this year that could reduce the number of people held in local jails statewide.

While the gathering was small, Silang said the groups’ efforts would continue.

“Everything has to start somewhere,” she said.