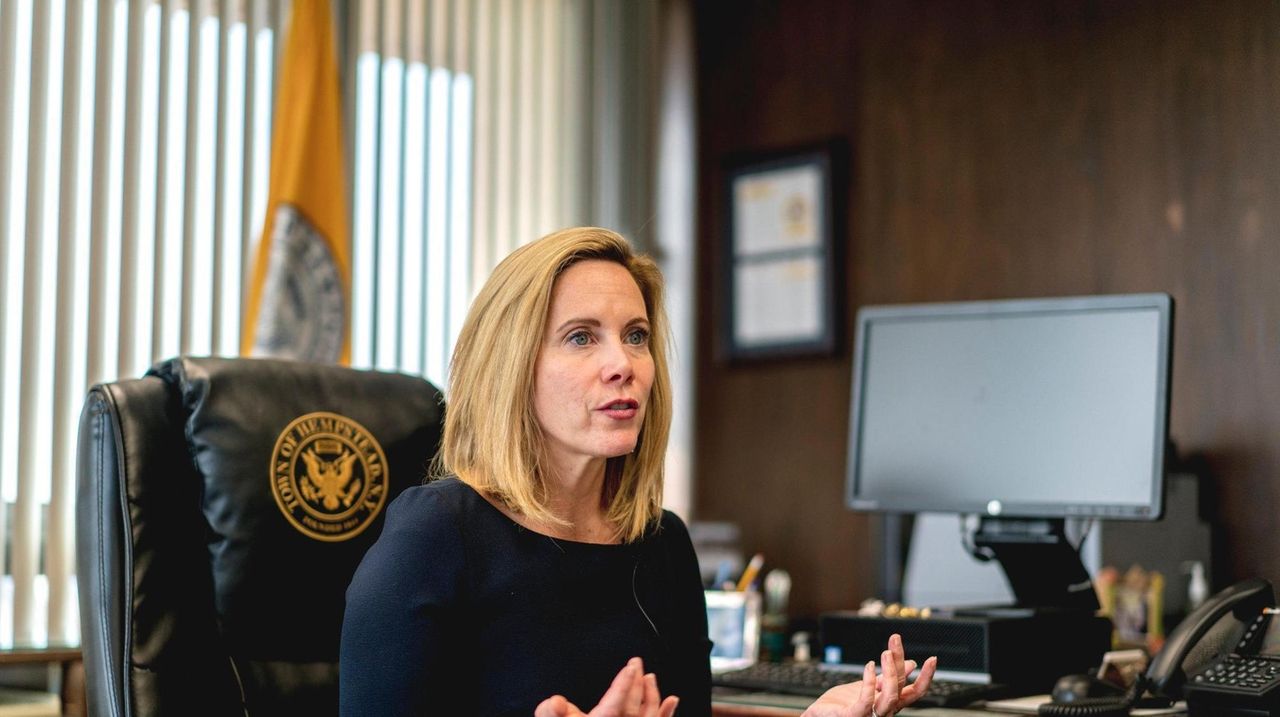 Democratic Hempstead Town Supervisor Laura Gillen talked about her first year in office. Gillen said she is trying to change the culture within Town Hall, and although she has been met with many challenges from the Republican-controlled town board, she is doing what she can to pass on savings to the taxpayers. Credit: Newsday / Shelby Knowles

Hempstead Town Supervisor Laura Gillen said she will seek re-election in November, despite a year of battles with the Republican-controlled town board that has stymied parts of her agenda.

Gillen, 49, of Rockville Centre, the town's first Democratic supervisor in more than a century, cited a record of accomplishment halfway through her first two-year term that she believes will buoy her re-election bid. She pointed to digitizing thousands of pages of town documents and putting them online as part of a transparency push, and cutting spending by refinancing bonds and curtailing town mailers.

Opponents say the supervisor’s “scorched-earth” style of governance, including suing and publicly denouncing the rest of the board, has alienated her few potential allies in town government and left her with a meager list of legislative achievements.

Gillen says the path to re-election lies in maintaining just that uncompromising approach — and hoping voters appreciate it.

“What I need to do is just keep on pushing through, keep delivering good government and shaking up the status quo,” Gillen said in an interview. “I’m hoping that will translate to a good November. Things are getting better in the Town of Hempstead just because I'm here.”

Gillen said her agenda going forward remains rooted in the reform platform on which she first ran for office.

“We’re trying to change the culture here,” she said.

In the 10 months remaining until the election, Gillen said she will:

Reaching her goals will likely require the support of the town board. Republicans hold a 5-2 majority and have voted against many of Gillen’s measures.

The town board in August tabled Gillen’s special election legislation indefinitely, a tactic Gillen described as “undemocratic” and “un-American.”

“She likes to claim she’s changing the picture; that she’s governing without politics and clearly that’s not the case,” Republican Councilman Anthony D’Esposito said. “Our agendas are different than the supervisor’s.”

The gulf between the supervisor and the board widened when Gillen sued board members in April to undo appointments, transfers and raises they approved shortly before she assumed office. That case is pending in Nassau Supreme Court.

“It's been a scorched earth policy from the supervisor,” said Councilwoman Erin King Sweeney, the Republican majority leader. “I'm sort of mystified and confused by the entire thing. You don’t make friends by attacking them.”

King Sweeney said she has not spoken directly to Gillen since the summer.

Gillen said she “constantly” reaches out to the town board members. She said she speaks regularly with Democratic Senior Councilwoman Dorothy Goosby and Deputy Supervisor Bruce Blakeman, a Republican.

Gillen said she asks to meet with the fellow board members every other week before town board meetings, but King Sweeney said she declines the invitations.

"When you have news conference after press conference, attacking people, accusing them of crimes, at some point you say enough is enough," King Sweeney said.

Blakeman and Goosby have both chastised Gillen publicly during board meetings for statements condemning the board, including accusations of corruption.

Goosby, whom Gillen described as “technically a Democrat,” regularly votes with the Republican majority.

A spokeswoman said Goosby was not immediately available for comment.

Democrats say the way out of this impasse is to place more members of their party on the town board.

The seats held by Edward Ambrosino, King Sweeney and Blakeman are also up for election in November.

"I have every confidence that they will reject the politics of the past," he said.

Cairo said the Republicans will announce their supervisor candidate within the next month.

Both Gillen and Republicans on the town board said they are open to working together — provided the other side is as well.

Gillen said she is "optimistic" that she can work with the board moving forward. King Sweeney said the relationship with Gillen can be repaired.

“It's a new year,” King Sweeney said of the prospect of reconciliation, noting that the two sides are working jointly on an ethics reform bill.