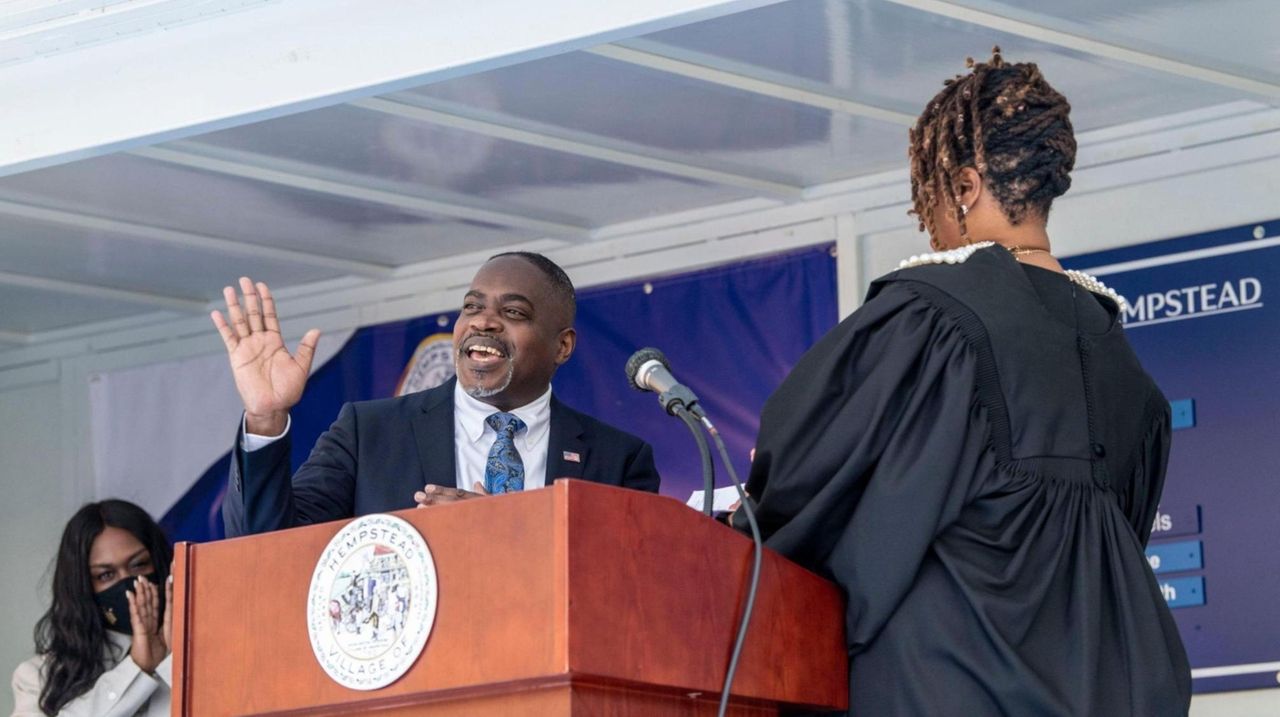 Waylyn Hobbs was sworn in as the new mayor in a ceremony at Hempstead Village Hall on Monday.  Credit: Newsday / Reece Williams

The newly elected mayor of Hempstead called for greater distribution of COVID-19 vaccines and announced upcoming changes in the village to a crowd of hundreds Monday during his inauguration ceremony.

Hempstead, a village with more than 55,000 residents — 94% of whom are Black or Hispanic — has been one of the hardest-hit communities on Long Island during the pandemic.

"I’m asking again, our governor, when he comes up with pop-up locations, please give us enough notice so we can make sure when it happens in Hempstead that the residents of Hempstead get the shot before people outside of Hempstead," said Waylyn Hobbs, who was sworn in to serve a four-year term.

Hobbs, a Democrat, defeated incumbent Don Ryan, a Republican, in the March 16 election. Kevin Boone and Clariona Griffith were sworn in as trustees at the same ceremony where more than 300 people attended, including elected officials and dignitaries, such as former Gov. David Paterson, who graduated from Hempstead High School, and three former Hempstead mayors: James Garner, Wayne Hall and Ryan.

In his inaugural speech, Hobbs said he wants to plot a blueprint for a better Hempstead that begins with accountability.

"We have a few who feel that because of their political connection, who hired them, that they are not to be held accountable," Hobbs said. "As a pastor, I believe in looking at the best in people and that people can change. But as your mayor, to those that think it’s going to be business as usual, I’m looking to change people."

Before being elected mayor, Hobbs had been a village trustee since 2013. He has been the senior pastor at the Coney Island Cathedral in Brooklyn for 27 years, according to his biography.

Under his administration, Hobbs said Hempstead police would beef up traffic patrol to make the village safer.

"As you slow down when you drive through Garden City and … Rockville Centre, we need you to give us the same respect in the Village of Hempstead and not act like this is a raceway," Hobbs said.

Other safety measures include ramping up enforcement on parking infractions.

"I’m tired of riding around the neighborhood [and] seeing cars double-park without any ticket," the mayor said. "And this is not about revenue. It’s about safety."

Federal and local elected officials who spoke at the ceremony called Monday "a new day" for America’s largest village, pledging to work together with the new mayor and his administration.

"You should know, mayor, and your entire team, that you not only have a partner with Nassau County, … you have a partnership with the entire [Hempstead] town board because it’s by working together … when we really accomplish great things," said Hempstead Town Supervisor Don Clavin, a Republican, following remarks by Nassau County Executive Laura Curran, a Democrat.