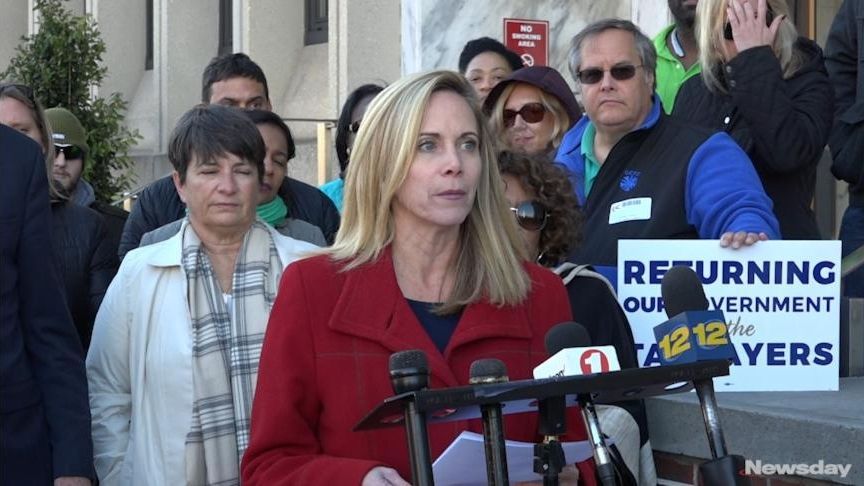 On Thursday, Dec. 7, 2017 Hemsptead Town supervisor-elect Laura Gillen voiced her strong dissaproval of the proposed changes to the five-year contract of the town board's union, Civil Service Employees Association Local 880, in which the town kept its ability to have layoffs.  Credit: Howard Schnapp

The Hempstead Town Board is to vote Tuesday to change its agreement with its union so that no town union employee can be terminated for budgetary reasons, according to a copy of the resolution.

The amendment to the Civil Service Employees Association Local 880’s collective bargaining agreement says, “no employee shall be terminated for reasons due to budgetary, economy, consolidation, abolition of functions, abolition of position or curtailment of activities but may be terminated only for misconduct or incompetence.”

Town spokesman Mike Deery provided Newsday with a copy of the proposed amendment Thursday. Deery said in a statement: “Hempstead Town’s administration has negotiated a proposed amendment to the collective bargaining agreement with the township’s labor union which would expand the protection of worker’s rights.”

Gillen said her administration would be prevented from balancing the town’s budget if future financial crises arise. “This amendment will be disastrous for Hempstead taxpayers,” she said Thursday at a news conference outside Town Hall. She vowed to file a lawsuit if the amendment passes.

In addition to potential financial effects, Gillen and Councilwoman Erin King Sweeney said the move is an attempt by outgoing Supervisor Anthony Santino to keep his “loyalists” in power after he leaves office on Jan. 2.

The changes would also protect exempt employees — those who do not have to take Civil Service tests and are not paid based on a graded system — from being fired for anything other than incompetence or misconduct.

Those protections, however, do not apply to staff in the offices of the town’s elected officials or department commissioners. It is anticipated that during the town board’s meeting on Tuesday, the board will vote to transfer some employees in those offices to other jobs within the town.

According to stamps on the document, the amendment has been in the works since at least late November. But in July, the town board voted to approve the five-year contract of its union, in which the town kept its ability to have layoffs.

There are about 1,800 full-time members and a “fluctuating number” of part-time seasonal members of the union, Deery said. The town’s total 2016 workforce was 2,057 full-time employees and 2,104 part-time staff.

Union president Charles Sellitto did not respond to requests for comment on Thursday.

King Sweeney has called for the town to hire outside labor counsel.

“We need an independent legal review by someone who is not working to advance Santino’s objectives,” King Sweeney said.

Paul Sabatino, a former chief deputy Suffolk County executive and longtime former counsel to the county legislature, said a “no-layoff” clause is often given in exchange for other concessions, such as increased employee healthcare contributions.

For labor unions, no-layoff clauses — especially ones that don’t require the membership to concede anything — are “like manna from heaven,” he said.