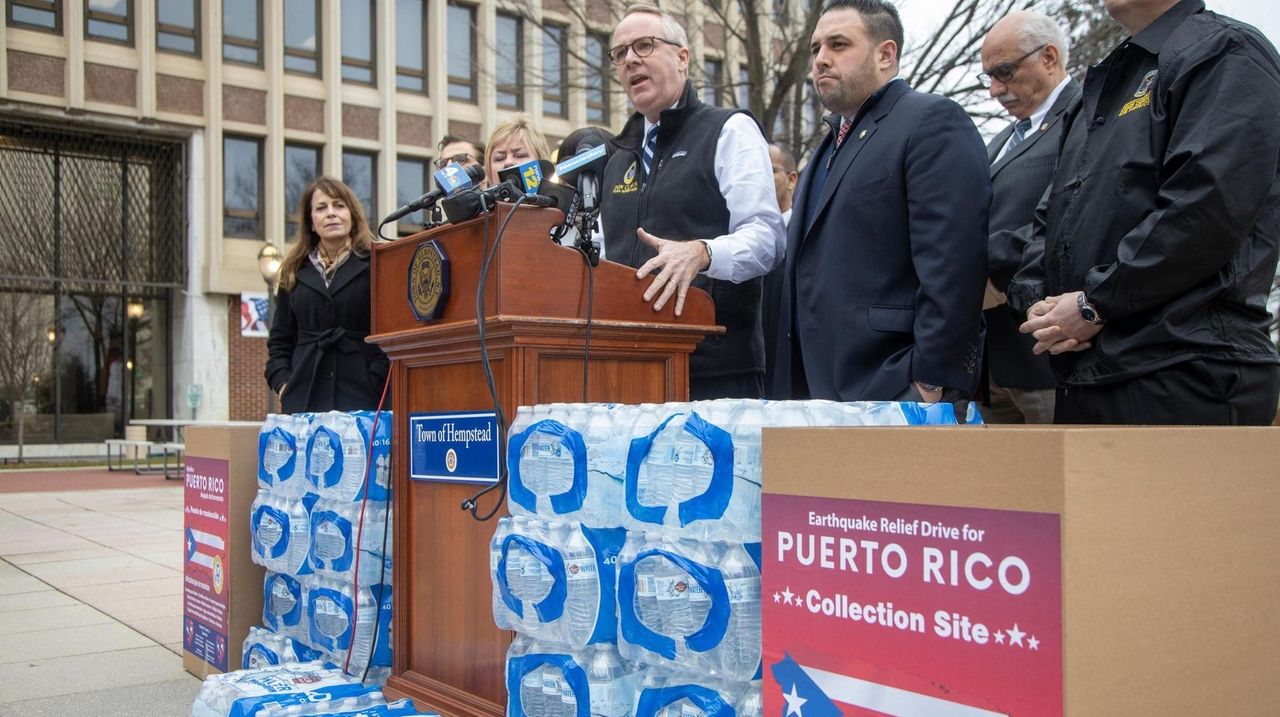 Hempstead Town is collecting water and supplies to send to Puerto Rico in the aftermath of a series of earthquakes that shook the island last week, causing millions of dollars in damage.

Town Supervisor Don Clavin was joined Monday by fellow Town Board members to announce the initiative, which they said will continue at buildings and parks across the town through at least the end of the month.

“The people of Puerto Rico are looking for help, and they’re looking for relief from their friends,” Clavin said. “We’re here to help.”

The supervisor said he reached out to each Town Council member last weekend to ask area businesses to assist in donating supplies. The BJ’s Wholesale Club in Levittown was the first to contribute, sharing 200 cases of water.

Council members said they want to collect more than just water and nonperishable food items. Laundry detergent, dish soap, hand sanitizer, baby formula and diapers are also needed, Senior Councilwoman Dorothy Goosby said. Extension cords can help those without power across the southern portion of the island where the quakes hit, she said. Drop-off boxes have been set up at Hempstead Town Hall, Old Town Hall, Levittown Hall, Echo Park and the Receiver of Taxes office at 200 N. Franklin St.

“There were neighbors, people that I knew my entire life, walking down Long Beach Road with everything left that they owned in a basket,” he said. “That’s what some of the people are facing in Puerto Rico and it’s our job ... to step up and do what’s right.”

Councilman Dennis Dunne, who said he has three cousins living in Puerto Rico, is working with the Knights of Columbus to find a partner organization in Puerto Rico to ensure supplies make their way to the people who need them most.

A 6.4-magnitude earthquake struck southeast of Guanica before dawn last Tuesday and was followed by a magnitude 5.9 quake in the same area Saturday. A spate of more than 1,200 mostly small quakes have impacted Puerto Rico over the past 15 days, all at shallow depths. Gov. Wanda Vázquez estimated damage from Tuesday’s earthquake at $110 million, with a total of 559 structures affected across Puerto Rico, which continues to recover from Hurricane Maria in September 2017.

New York is home to more than 1.1 million Puerto Ricans, according to the Center for Puerto Rican Studies at Hunter College. The U.S. Census Bureau counted about 88,500 Puerto Ricans living in Nassau and Suffolk in 2010.