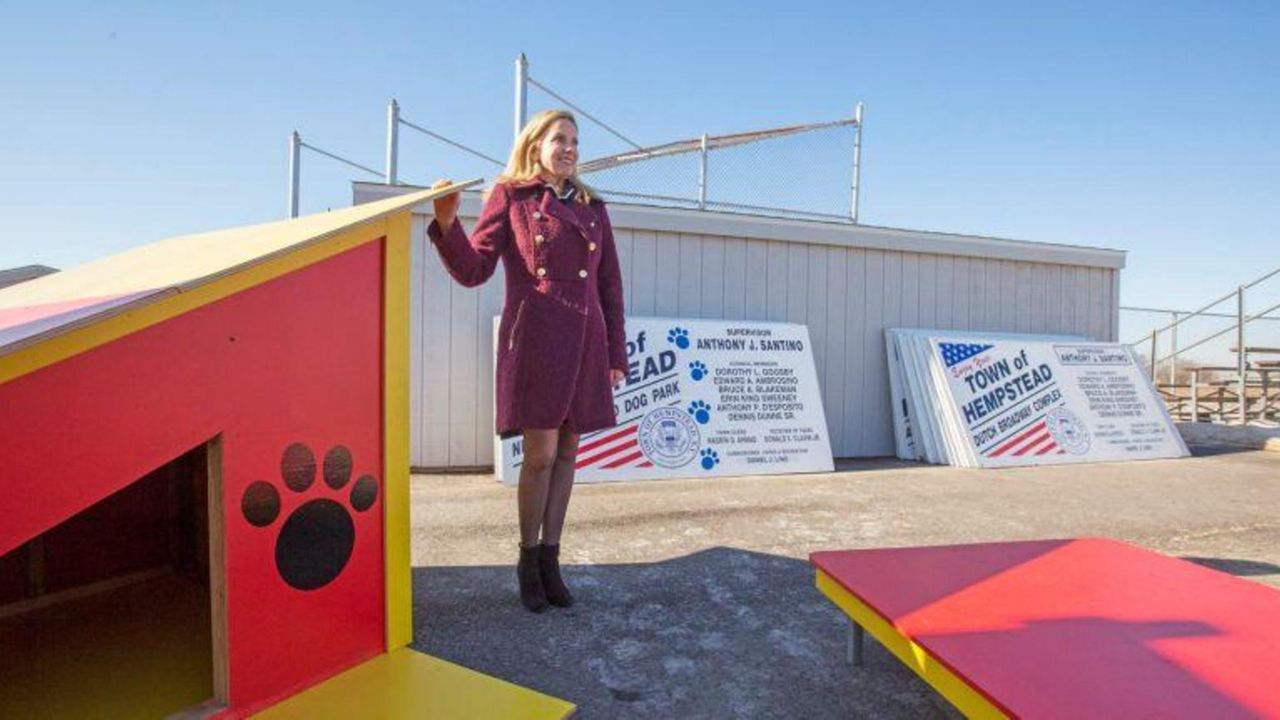 Hempstead Town Supervisor Laura Gillen said the town has replaced all park signs with elected officials' names to reduce self-promotion and save money during election turnover. Gillen said during a news conference on Thursday, Jan. 18, 2018, at Newbridge Dog Park in Bellmore that the one-time expense would save $3,000 every time signs needed to be updated with primer and paint for a change in elected office. Credit: Newsday / Yeong-Ung Yang, John Asbury

Hempstead Town officials spent $4,600 to replace 107 signs from parks and facilities featuring the names of town board members and former Supervisor Anthony Santino, with generic signs that read, “Welcome to your Town of Hempstead.”

Gillen said during a news conference Thursday at Newbridge Dog Park in Bellmore that the one-time expense would save $3,000 every time signs needed to be updated with primer and paint for a change in elected office. Gillen was sworn in Jan. 1, ending Santino’s two-year term. The town previously listed Santino’s name on town signs and materials. The signs were updated in 2016 after former Supervisor Kate Murray’s name adorned town signs for more than a decade in office.

“The list is long and every day, our administration comes across new pieces of public property bearing the names of local politicians,” Gillen said.

Hempstead Town officials began to replace signs in December while Santino was still in office. A Dec. 6 work order called for replacing 93 signs and it was completed by Jan. 3.

Gillen’s representatives said the town began to replace signs at the request of her transition team.

“We had very little communication with the former administration,” Gillen said. “It was something I elected to do.”

The town will still keep some signs with names of elected officials, such as at Hempstead Town Hall, on temporary signage for special events and on official government documents and forms.

Gillen said it was important to strike a balance to inform the public of their local elected representatives.

Some of the old signs were being repurposed at the dog park or to replace sheds and baseball dugouts.

Gillen unveiled a painted doghouse and ramp built from old park signs. Gillen said town staff built a new walk-up ramp that normally costs $2,500, a grooming station and a doghouse to be used at the dog park, which she displayed with adoptable dogs from the town animal shelter.

“It is our hope by redesigning these signs and removing the names from so many pieces of public property, we will save money when future administrations and elected officials take office and make it much more difficult for them to justify a practice that so many see as unnecessary and shameless self promotion with taxpayer money,” Gillen said.

Search Hempstead Town salariesSee who was employed by the Town of Hempstead in 2017 and how much they earned.