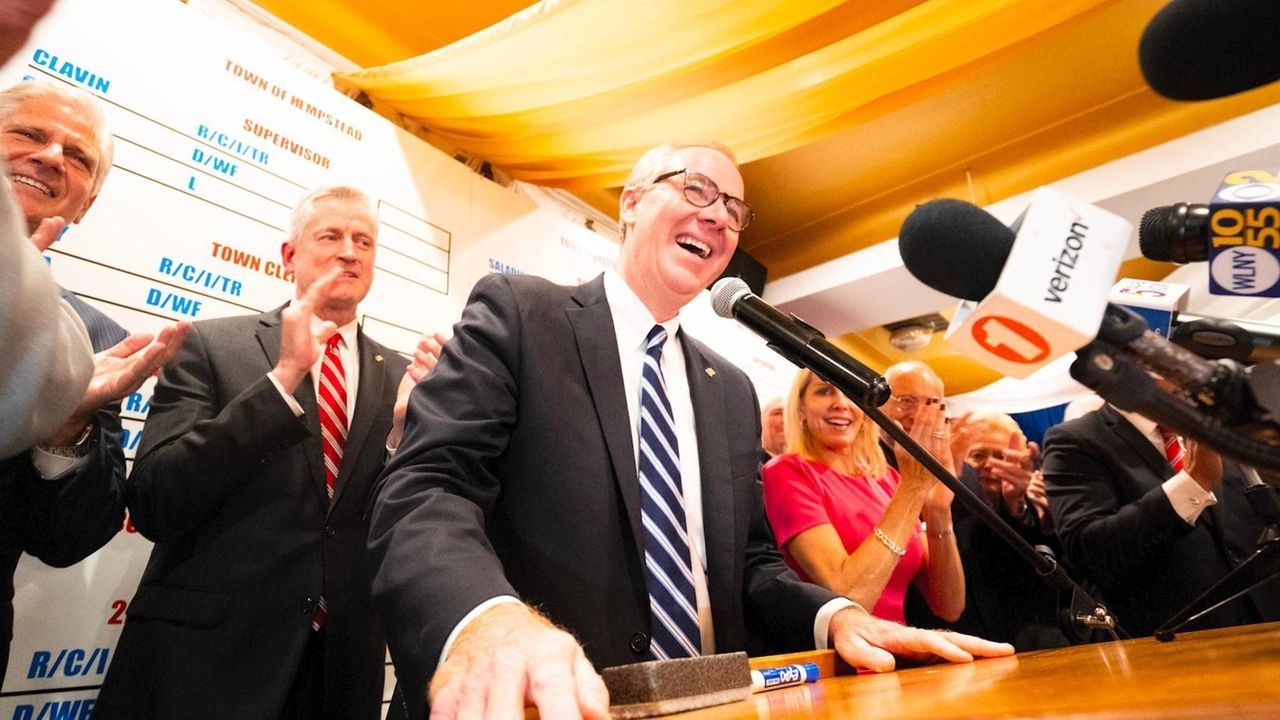 On Wednesday, Donald X. Clavin Jr., who is claiming victory in the Hempstead supervisor race, is doing a victory lap even though Supervisor Laura Gillen said she is waiting for absentee ballots to be counted before commenting. Credit: Howard Schnapp

Republican Don Clavin, who has a nearly 1,400-vote lead in the Hempstead supervisor race, said Wednesday he is moving forward with his transition, while incumbent Democrat Laura Gillen said she is waiting for absentee ballots to be counted.

The Nassau County Board of Elections will begin counting about 4,500 absentee ballots next week that have so far been returned. There were an additional 3,000 absentee ballots requested before the election, which have not yet been returned, but could be added to the tally if they are postmarked by Election Day and received by the Nov. 12 deadline

Gillen, who was elected in 2017, was seeking her second term as the first Democratic supervisor elected in more than a century.

Clavin said Wednesday that he was comfortable with his lead, and said he thought he would prevail with any additional absentee ballots or a recount. He called the election results “a roller coaster” and said he has not yet spoken to Gillen.

“The election is over, and the residents want us to move forward,” Clavin said.

Gillen and Nassau County Democrats said they were waiting for additional absentee ballots to be counted, but county party chairman Jay Jacobs acknowledged, “To be fair, Gillen is facing a steep climb.”

“I respect the democratic process and want to make sure each and every vote is properly counted,” Gillen said in a statement.

Clavin led a sweep of Republican seats with the reelection of Councilman Bruce Blakeman and Councilman Thomas Muscarella, who was elected to a four-year term after he was appointed in April following the  guilty plea of Councilman Ed Ambrosino to tax evasion. Republican Chris Carini was also elected to fill the council seat of Erin King Sweeney, who resigned in September to move to North Carolina.

Former Hempstead Supervisor Kate Murray was elected as town clerk, and Jeanine Driscoll was elected to succeed Clavin as receiver of taxes.

Clavin had served in the tax receiver role for 18 years and said he has a strong relationship with both Democrats and Republicans in the town. He said he reached out on election night to offer to partner with Democratic Senior Councilwoman Dorothy Goosby, who campaigned for Clavin.

He said he is familiar with town departments and plans to cut taxes by running the town efficiently, modernizing departments and eliminating positions through attrition.

“Residents want to see government leaders produce results,” Clavin said. “I work with people in the town, and they don’t work for me. We all work for taxpayers, and the employees need to get accomplishments done in order to work.”