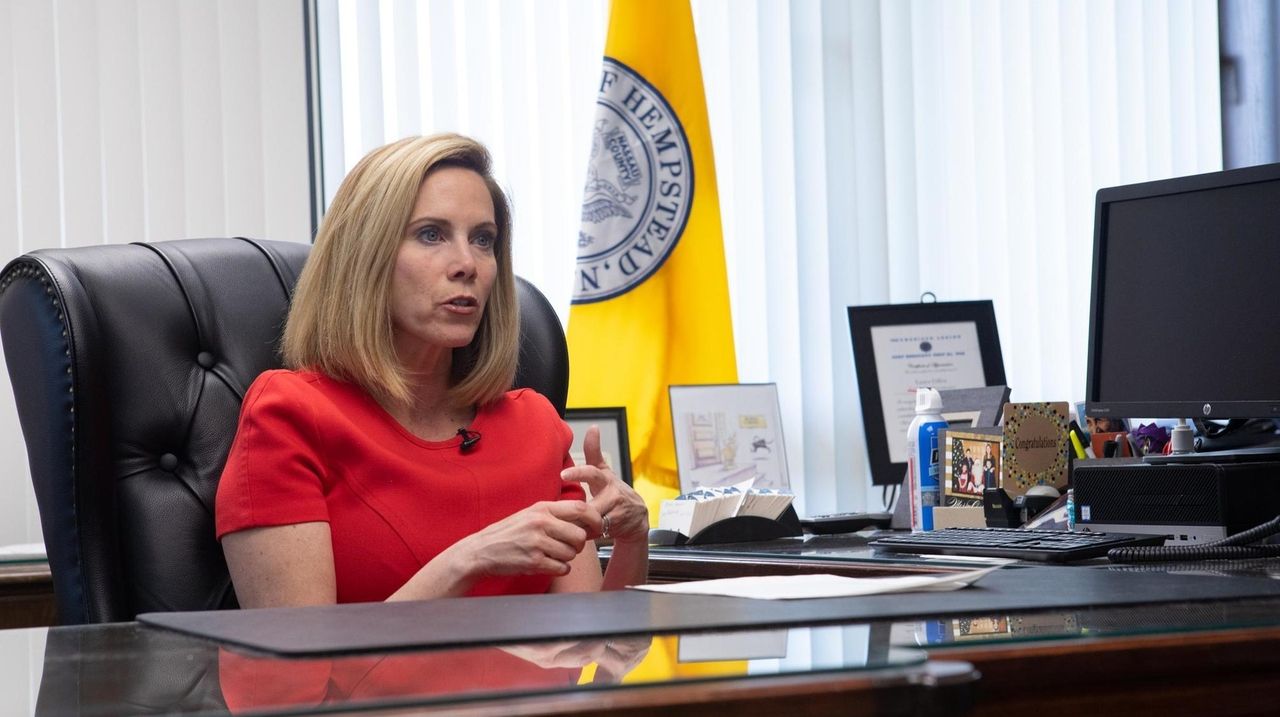 On Wednesday, Hempstead Town Supervisor Laura Gillen talked about her first 100 days in office. She spoke about the "very hard and close look at the town's finances" she and her staff are undergoing and changes to the town's procurement policies; the challenges in increasing transparency; and her initiative in becoming a paperless town. And she said she recognizes that all of her decisions must be made with the mindset of how will they will benefit the people of the Town of Hempstead. Credit: Newsday / Jeffrey Basinger

On her 100th day in office, Hempstead Town Supervisor Laura Gillen said she had hoped for more support and bipartisanship from her colleagues on the town board.

Two hours later, she sued them.

Some of Gillen’s biggest initiatives in her first nearly four months in office have been stymied by the town board’s GOP majority and senior Councilwoman Dorothy Goosby, a fellow Democrat, as they claim she had been uncooperative and uncommunicative. Gillen disputed those allegations, countering that she has been left out of events by the rest of board.

“I was hoping that there would be more of a coalition,” Gillen said Wednesday afternoon in an interview in her office. “It is difficult dealing with an adverse board.”

Gillen said the board’s pushback surprised her after a campaign where GOP Councilman Bruce Blakeman endorsed her and Republican Councilwoman Erin King Sweeney publicly supported her.

“It’s not as friendly as I’d hoped it would be, as it was in the past,” she said.

A couple of hours later, Gillen filed the lawsuit in Nassau County Supreme Court, naming each member of the board as well as the town’s public employees union and the town Civil Service Commission and its four members. Her lawsuit challenges a no-layoff clause in the union’s contract and seeks to overturn personnel moves made during former Supervisor Anthony Santino’s final board meeting in December. Gillen said then that she planned to sue.

Gillen has already struggled to build a coalition of four votes to further her agenda on the town board, and now it’s unclear what, if anything, she’ll be able to get done in light of the lawsuit’s backlash, according to Michael Dawidziak, a Bohemia political consultant who works mostly with Republicans.

“I don’t see how this helps her count to the required number to get her agenda done,” Dawidziak said Thursday.

Sweeney, the board’s majority leader, called the lawsuit a “scorched-earth approach to governing” and said she was blindsided by it, particularly because she had voted against the no-layoff clause.

“To me this just seems like such an extreme action, something that is meant to be provocative and headline-grabbing,” she said Thursday morning. “I don’t see how it gets us to resolve any problems facing Hempstead residents today.”

Gillen defended her lawsuit Thursday as separate from the day-to-day governing of the town.

“I do not see this as an aggressive action,” she said. “The board should see this as a decision to manage the budget. This is not a hostile act.”

Some of the supervisor’s recent accomplishments already come with asterisks. She has led the charge to institute extra night meetings, reform the animal shelter and repeal a controversial $125,000 outside income cap. But she wanted more night meetings than the rest of the board would approve, and she was criticized by the union and the board’s majority for her attempts to potentially privatize parts of the animal shelter.

The town board has recently rebuffed some of Gillen’s most important legislation — including her initial proposals to refinance town bonds, hire outside private investigators and appoint a seventh member to the town’s embattled Industrial Development Agency.

“I think that the supervisor campaigned and spoke openly of increased communication among the board members, and I think that has been completely lacking since she took office,” GOP Councilman Anthony D’Esposito said. “It’s a shame that all of us on this board have experience in government and she should be pulling from that experience.”

Gillen can’t even count on support from Goosby solely because of their shared party affiliation.

“I don’t consider myself a Democrat when I’m working for my districts,” Goosby said. “I forget about the fact that she’s [Gillen] a Democrat.”

“On one hand, she’s doing her best to work with the other side,” he said. “While on the other hand, she’s fighting to make important changes that I think the voters demand.”

Gillen has touted her recent transparency moves, a financial audit of the town’s budget, infrastructure projects and environmentally friendly initiatives during her first 100 days, as well as her staff’s audit of the town’s snow removal operations in January and a new cyber-secure app.

Her ideas for the next few months include implementing a requirement for bids for any professional or legal services above $20,000, digging into the town’s existing contracts and coming up with a five-year capital plan for all of the town’s departments.

“This is all to restore the public’s trust in government,” she said.

Democratic officials argued that Gillen had to use the lawsuit as another measure to fight back the Republican majority trying to reclaim her seat and maintain power in the GOP stronghold.

Jacobs said he had not studied the merits or law of the case, but said it was wrong for the outgoing board to tie Gillen’s hands with appointments.

“She was elected by the people of Hempstead to clean up the town. The Republicans want the status quo and are fighting her every step of the way,” Jacobs said.

“She has to use every tactic necessary. Being nice will get you nowhere. If the board potentially violated the law, you have to take them to court.”

The lawsuit, however, could be seen as a public relations stunt to show residents that she’s on their side, Dawidziak said.

“This is the type of thing where if you do something like this and it backfires and it doesn’t go anywhere, you end up being weaker for it and not stronger,” he said. “I doubt very many members of the town board are quaking in their boots about this lawsuit.”

Gillen’s petition — filed just before the statute of limitations expired — is asking for the court to overturn the board’s votes made during a public meeting when Santino was a lame-duck supervisor.