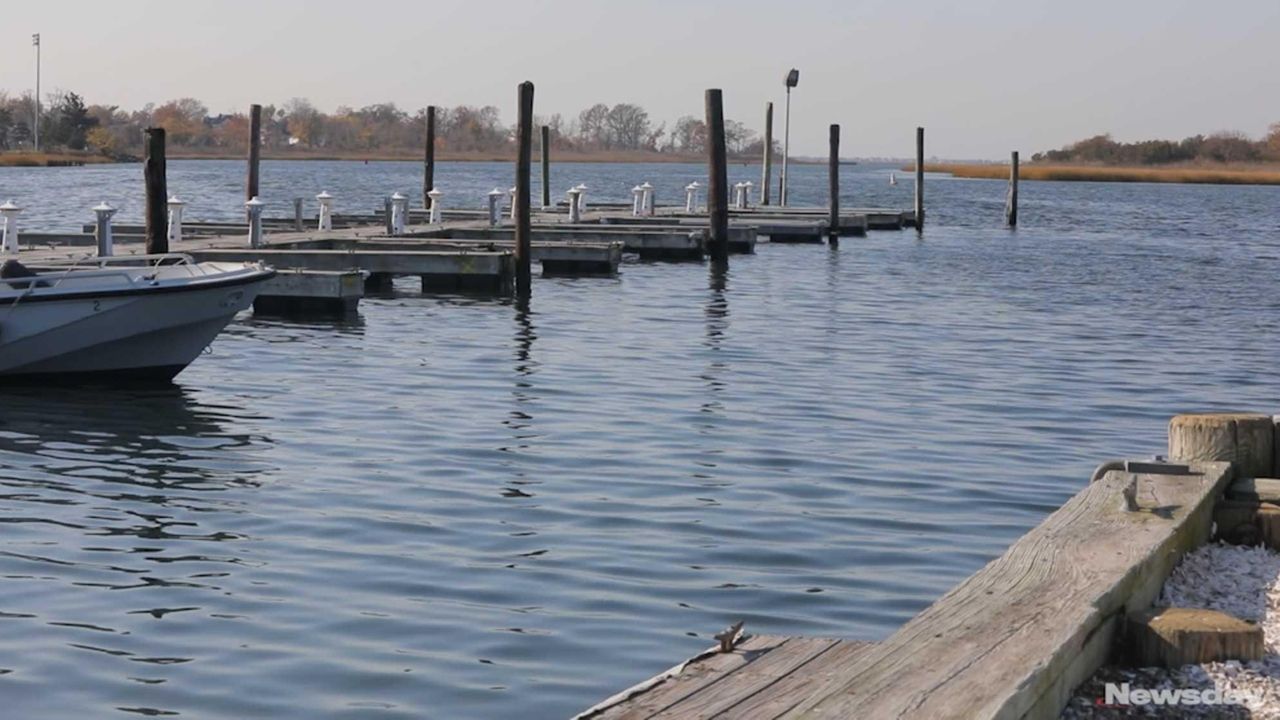 Hempstead Town officials announced on Wednesday, Nov. 16, 2016, that they are seeking to change the name of the "Negro Bar Channel," a waterway between Inwood and Kennedy Airport. At a news conference, officials said they want to rename the waterway for late Inwood firefighter Joseph Sanford Jr. Credit: Newsday / Jeffrey Basinger

Hempstead Town is asking state and federal officials to change the name of “Negro Bar Channel” — a waterway off the Inwood Marina — to instead honor a local fallen hero.

“It is truly offensive and simply unconscionable that a border between America’s largest township and the largest city in the nation still carries this racist and intolerant name,” he said at a news conference Wednesday. “The time to change the name is long overdue.”

Town officials want the channel renamed for late Inwood firefighter Joseph Sanford Jr. To do so, the town must appeal to the state Committee on Geographic Names, which can then make a recommendation to the U.S. Board on Geographic Names to make the formal change.

Firefighter who died in line of duty honored

State officials said they have received the request, but it is still under review. Once a recommendation is made, it will be placed on the agenda of the U.S. Board on Geographic Names for them to vote on a change.

Sanford and his family lived a block away from the channel in December 2014 when he was called to fight a Woodmere fire. While there, the 17-year veteran of the Inwood Fire Department fell through the floor of the house and was found in the basement. Sanford died of his injuries four days later. He was posthumously promoted to chief.

His wife, Jackie Sanford, said on Wednesday that neither she or her husband knew of the channel’s name, thinking it was just Jamaica Bay. She said renaming the waterway would honor her husband’s memory.

“Joe got up every morning and was never looking for anything in return,” Jackie Sanford said. “We’ve lived here since 1978 and never knew the name. This means he’ll never be forgotten for who he was and what he stood for.”

The channel faces Kennedy Airport’s southern runways to the north and is bordered by a subdivision of homes in Inwood and Bayswater State Park in Queens to the south.

The current name of the channel dates to 1963, when an act of Congress changed it to “Negro Bar Channel” from a more offensive name using another racial slur. That name is documented as early as 1891 by the U.S. Army Corps of Engineers in a letter from Lt. Col G.L. Gillespie to Brigadier General Thomas L. Casey, who was seeking a route from Jamaica Bay to Long Beach inlet.

“This is a wonderful solution to help heal our communities,” Goosby said. “It didn’t matter to him [Sanford] what color, creed or religion of who needed his help, he gave it his all.”

New York NAACP State Conference president Hazel Dukes, who has lived in Nassau County for 30 years, said she had been unaware of the channel’s name — but she lauded the council for seeking to change it.

“I think it’s a proper time to change it. With what the sentiment in this country is now, we most certainly don’t need a Negro Bar Channel,” Dukes said. “To me, it’s degrading.”