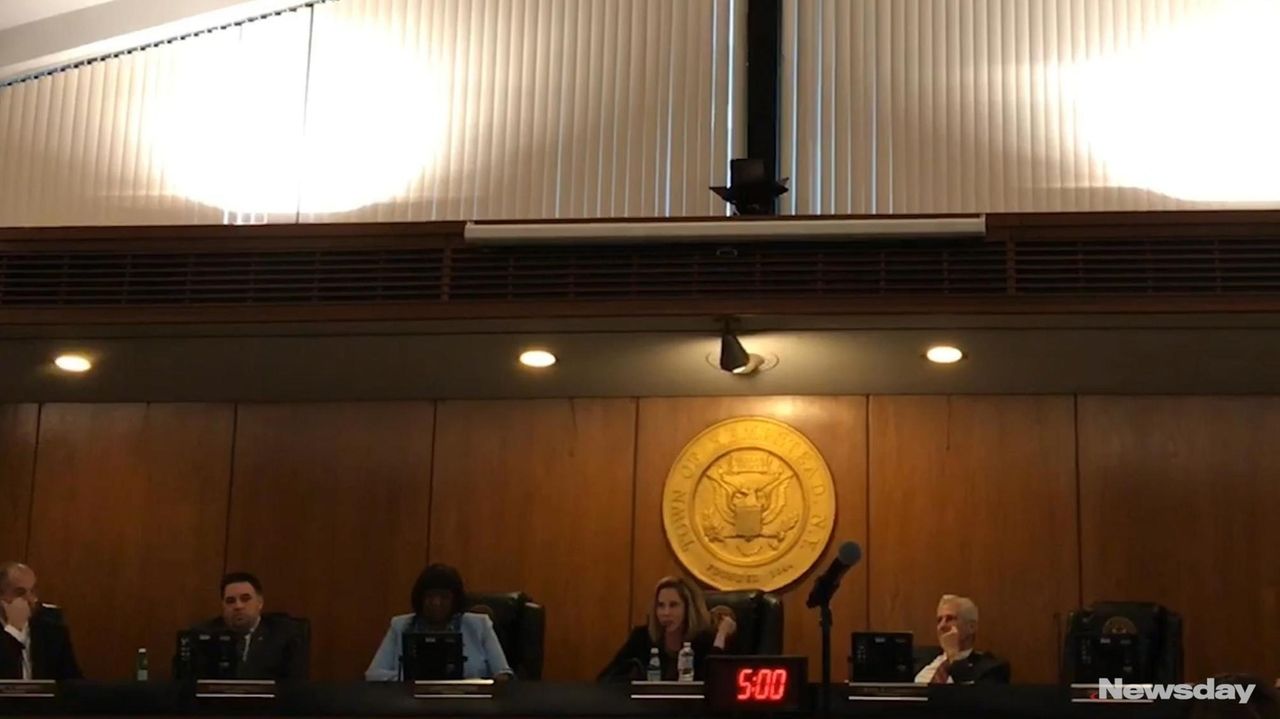 Hempstead Town Supervisor Laura Gillen (center) and Senior Councilwoman Dorothy Goosby spar over bond counsel and communication among the town board during its meeting on March 20, 2018. Credit: Newsday / Stefanie Dazio

Hempstead Supervisor Laura Gillen clashed with board members Tuesday as the town board awarded a no-bid contract to an outside bond counsel.

The town hired the firm, in addition to its current Manhattan bond counseling firm Capital Markets Advisors, based on a recommendation of Hempstead Town Comptroller Kevin Conroy.

Conroy said he knew the firm from his time working with the Nassau OTB. The firm also served the Nassau County Industrial Development Agency.

Hempstead is paying Phillips Lytle up to $395 per hour for legal advice, according to the town’s resolution.

Gillen said the town board’s hire — which didn’t include competitive bids — went against her campaign promise for transparency.

“Voters elected me because they are tired of business as usual and of a patronage system of government that has been, at best, careless with taxpayer dollars,” Gillen said.

Gillen said she would introduce a resolution at the next meeting, April 10, to require competitive bids for all professional services exceeding $20,000.

Senior Councilwoman Dorothy Goosby, the board’s lone Democrat, shouted back and forth with Gillen, and accused her of circumventing the board in January by seeking a resolution to refinance $32 million in bonds, with a threshold of up to $110 million. The board later refinanced $32 million last month, saving $1.4 million.

Gillen’s communications director Samantha Levine said the town was asked to refinance its bonds last year, which could have saved about $5 million.

But board members said the town’s financial advisers could not guarantee the savings and said the move could have added to the town’s long-term costs.

“The Town Board members believe that the retention of bond counsel that they voted for will benefit taxpayers by ensuring that the Town receives the best possible rates in any future bonding and refunding,” the councilmembers’ statement read.

Gillen and Goosby also sparred over the appointment of Jack Majkut, a union electrician, to the town’s IDA board. Goosby sought to postpone the vote, saying she hadn’t had enough time to review his qualifications or interview him.

Gillen said she had given out his resume in February and he was present at Tuesday’s meeting if Goosby wanted to speak to him in an executive session.

The board voted 5-1 to table Majkut’s appointment. Gillen voted against the move, saying the IDA board needs a labor voice in light of a project that deals with union disputes.

Search Hempstead Town salariesSee who was employed by the Town of Hempstead in 2017 and how much they earned.