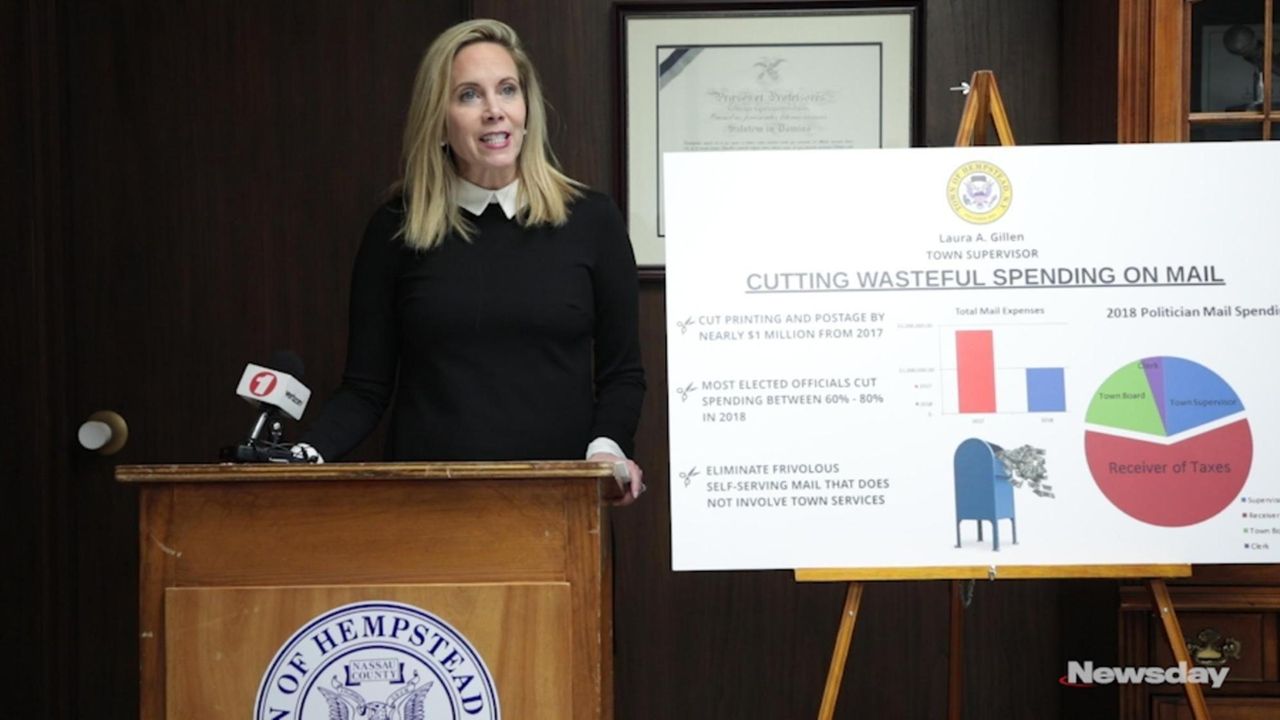 Hempstead Supervisor Laura Gillen called on the town board to control mail spending after board members passed a resolution to give town officials an open authority to send mailers to residents.  Credit: Newsday / Yeong-Ung Yang

Hempstead Supervisor Laura Gillen called on the town board to curb mail spending after board members passed a resolution to give town officials an open authority to send mailers to residents.

The resolution was an emergency addition to Tuesday’s town board meeting agenda in response to a $55,000 mailer by Receiver of Taxes Donald Clavin that Gillen had stopped from being distributed to 250,000 homes.

Clavin’s mailer warned residents about Nassau County’s reassessment project and advised residents how to challenge their assessments with the county.

Gillen said the mailer was duplicative and needless because additional mailers had already been sent out by the county and Clavin offered no town services to challenge assessments.

“This mailer shamelessly stokes fear and anger of a broken assessment system that the county, not the town, is in charge of fixing, while simultaneously promoting the tax receiver,” Gillen said at a Thursday news conference. “Even though he has nothing to do with the assessment system, this mailer is politically deceptive and has nothing to do with the services offered by the town of Hempstead.”

“The fluff mail champion has the nerve to complain about an instructional guide to challenging tax assessments, one of the most pressing issues confronting Nassau homeowners,” Clavin said.

Gillen said the town has slashed $900,000 in mailing expenses since she took office in January. The town spent nearly $1.9 million in mailing last year and came in under $1 million this year. The town budgeted $2.9 million for mailers this year.

The Receiver of Taxes office has remained largely the same, spending $334,000 this year, compared with $333,000  last year. Gillen said that figure is more than all other elected officials combined.

The town board's Republican majority leader Erin King Sweeney said mailers should only be issued in emergencies or to distribute essential information. She led a bill last year to prohibit mass-mailings within 45 days of an election.

“We need to have a broader conversation about best practices to administer mailers that respects the right of independently elected officials to communicate with their constituents while ensuring that all officials respect taxpayer dollars and do not engage in wasteful mailing practices,” King Sweeney said.