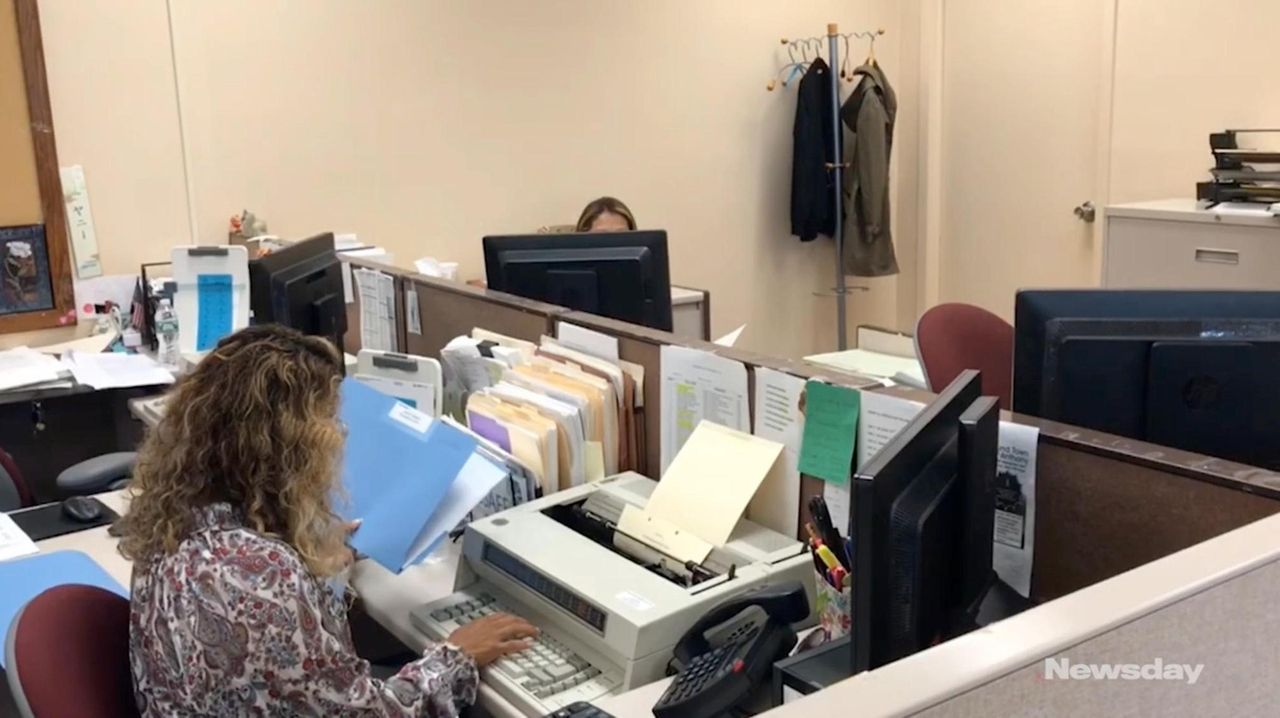 Cubicles in Hempstead Town Hall echo with the sounds of an earlier technological era: The mechanized clicks and clacks of electronic typewriters, still conducting the daily business of America’s largest town.

Decades after computers rendered the old-fashioned devices obsolete, Hempstead employees from the attorney’s office to the sanitation department still use dozens of them to draft death certificates, address envelopes and fill out calendars.

To Laura Gillen, who was elected supervisor in November after campaigning for reform, the town’s 72 typewriters are emblems of its archaic technology, which she wants to spend millions of dollars overhauling in the years to come.

“It’s a town run by paper. Nothing is digitized,” she said on a recent walk-through of the town clerk’s office, where 25 of the aging machines still churn out documents every day.

“My agenda when I got here was to really modernize this office.”

The fleet of typewriters is just one technological anachronism hampering efficiency, Gillen and other Hempstead officials said. The town’s general ledger software is decades old, its digital filing system varies from one department to the next and, until recently, only two town facilities accepted credit cards.

But Hempstead has already implemented some upgrades since Gillen took office in January, such as revamping the town website and increasing the number of credit card machines in town facilities to about 17.

The goal is “not to replace employees, it’s just to make their lives easier and make things better for the residents," she said.

Such changes will be costly. A plan to introduce new software for human resources, payroll and finances will alone cost about $9 million over 10 years, chief technology officer Ari McKenzie said.

But “the offset in efficiency definitely outweighs the cost,” he said.

While some staffers welcome the innovations, others are more resistant, officials said.

Rosario Seims, an aide in the clerk’s office, uses a typewriter to transcribe town board resolutions.

She said she would use a computer for the task if asked, but she doesn’t mind her typewriter, an IBM Lexmark Wheelwriter 1500.

“It’s an oldie, but it’s very efficient,” she said.

Hempstead is not the only Long Island municipality still using typewriters. Huntington Town has eight in its inventory, Islip Town has about 35 and Oyster Bay Town has 57, according to a Newsday survey.

The machines have their advantages, officials said.

“The State Department of Health requires corrections [to birth and death certificates] to be made either by hand or by typewriter on the original document, and the typewriter is a much neater alternative,” said Carole Trottere, spokeswoman for North Hempstead Town, where four typewriters are still in use.

Richard Polt, a professor of philosophy at Xavier University in Cincinnati, Ohio, and an expert in typewriter history, said some government departments, including intelligence agencies, prefer the older machines to computers because they are less vulnerable to hacking.

“There’s something to be said for the stability and privacy of paper documentation,” he said.

Hempstead will use its typewriters for the foreseeable future, town officials said. The town board voted unanimously last week to authorize a contract with Queens Typewriter & Stationary Corp. to service the town’s devices.