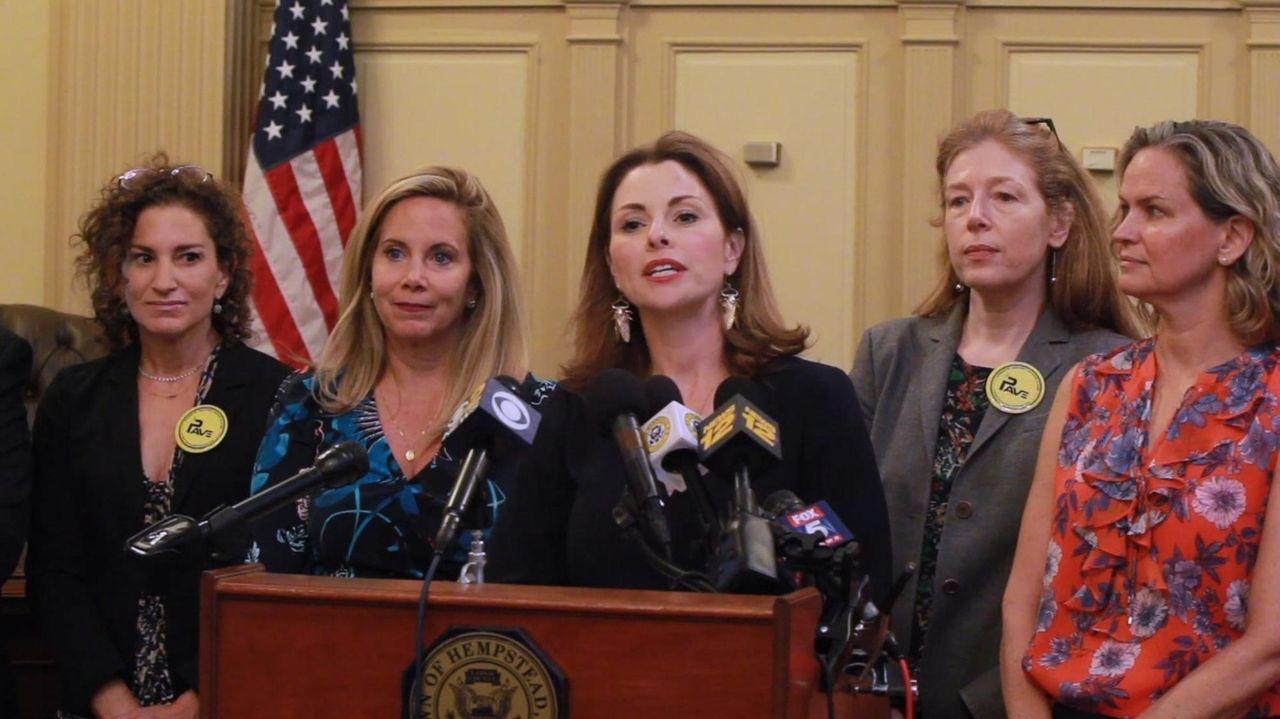 Hempstead and Nassau County officials announced Tuesday that Hempstead Town leaders will vote at their Sept. 24 meeting to ban the sale of flavored e-cigarettes and liquid vaping tobacco products, which would make Hempstead the first local government on Long Island to enact such a ban.  Credit: Howard Schnapp

Hempstead Town officials plan to vote at its next meeting to ban the sale of flavored e-cigarette and liquid vaping tobacco products.

The Sept. 24 vote would make Hempstead the first local government on Long Island to enact a ban on flavored vaping products that health officials say is marketed to children and created an epidemic among teens.

Hempstead and Nassau County officials announced the proposal before Tuesday’s town board meeting, where council members voted to schedule a Sept. 24 public hearing.

“As we go off to school you think of happiness, but the persistent reality in our middle schools and high schools is the use of e-cigarettes and vaping,” Hempstead Supervisor Laura Gillen said. “It’s something parents have to battle every day to convince our children this is not OK. This is not safe.”

Gillen said 3.6 million teens nationwide are using e-cigarettes, and the town’s legislation banning flavored tobacco is aimed at stopping from teens from getting addicted at a young age.

“I am very proud of what the Town of Hempstead has done. I encourage all the towns on Long Island to follow suit,” she said.

Nassau County Legis. Arnie Drucker (D-Plainview) introduced legislation in May to enforce a countywide ban, but was stalled by the Republican majority.

“This will be the first, but I know this won’t be the last,” Curran said. “Smoking cigarettes is no longer cool. It had been pretty much wiped out. Now vaping is what everyone’s doing at the middle school and high school level.”

There have been 215 cases of severe lung damage nationwide this year due to vaping, Curran said. She said flavored e-cigarettes are marketed to teens using flavors such as Oreo, cotton candy and banana strawberry, she said. Officials said one pack of vaping liquid has as much nicotine as 20 cigarettes.

“It’s not just in other places, it’s here in Nassau County,” Lee said. “We’re fighting billions from Big Tobacco trying to hook a new generation of customers that could reverse the gains of the last 10 to 15 years.”