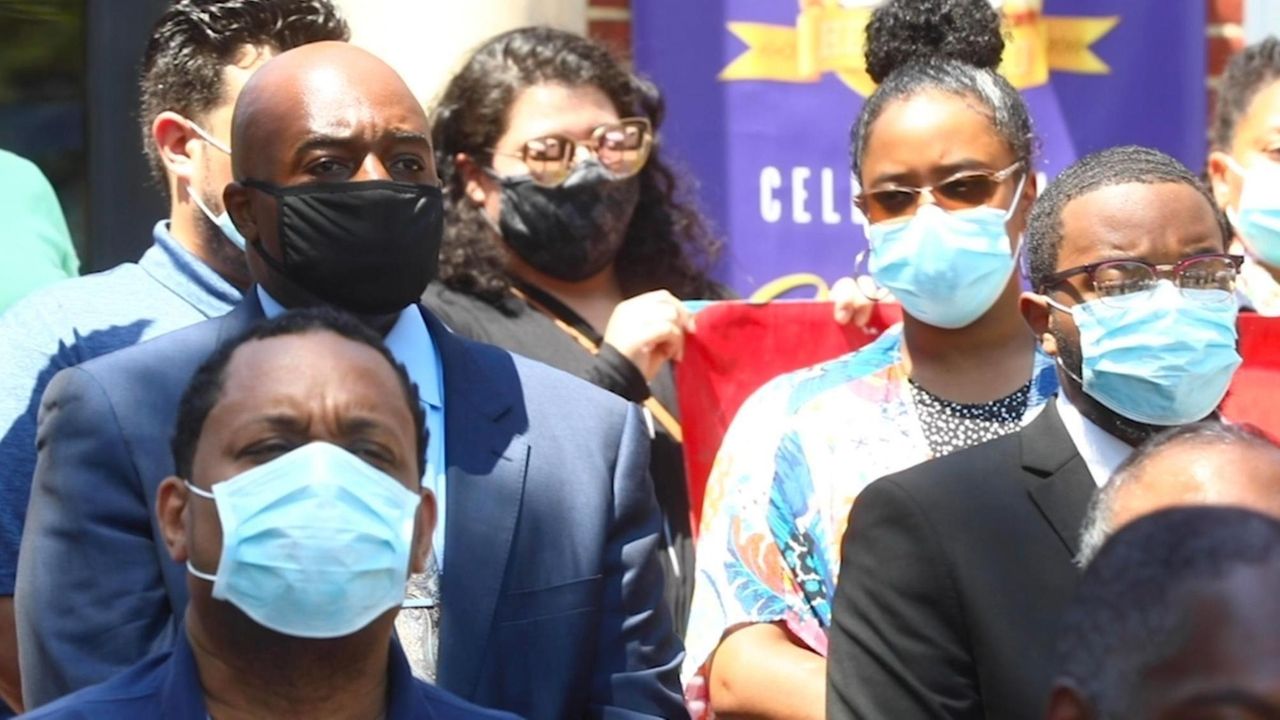 A Hempstead Village trustee at a news conference Monday called for abolishing the village fire council and asked the village to appoint a new commission to review a firefighter's suspension for an "insensitive" social media post.    Credit: Newsday / Chris Ware

A Hempstead Village trustee is calling on abolishing the village fire council and asking the village to appoint a new commission to review a firefighter's suspension for an "insensitive" social media post.

Gaetano Leone, a volunteer firefighter and worker in the village’s Department of Public Works, posted a video last month on Facebook of protesters violently knocked to the ground by water cannons. He captioned the video, “This is how we should deal with rioters.”

Trustee Waylyn Hobbs said he will ask the village board Tuesday night for a public hearing to eliminate the fire council, which is made up of 20 wardens from the village’s 10 fire houses and four chiefs. Hobbs was joined by village religious leaders at a rally Monday to condemn the post.

Hobbs, who is also a volunteer firefighter, said the governing body of the fire department should include members who live in the community and a diverse group of commissioners because he said members of the fire council sought to reverse the suspension and saw no problems with the post.

Hempstead Volunteer Fire Chief Kyle Boles could not be reached for comment. Assistant Chief Fred Sanders said Monday that he was not aware of the proposal and could not comment further.

Hobbs said he has not discussed the proposal with the fire department.

"I don't have to discuss it with them," he said.

Mayor Don Ryan suspended Leone through July 14 and ordered him to attend sensitivity training. Hobbs said the fire chiefs recommended an additional three-month suspension, which must be imposed by the fire council.

"The fact of what he did was bad, distasteful, unacceptable, but I didn't think it rose to the level of termination," Ryan said at the rally. "I don't think there's anything wrong with a second chance."

The post appeared to include Venezuelan flags, but Hobbs said the video was reminiscent of the 1960s protests when Black civil rights protesters were knocked to the ground with fire hoses and attacked with police dogs. He stopped short of calling the post racist because it described rioters, not a particular race.

Hobbs said the village was reviewing a second post by a different member of the fire department posting a photo of a Latino person urinating, adding “look at those animals.”

“When you look at the history in the U.S. and the civil rights movement, they weren’t rioting, they were protesting peacefully for civil rights and dogs were put on them,” Hobbs said. “With the climate of what’s going on now, it’s zero tolerance for racism and insensitivity. We have to be sensitive to all cultures.”

Hobbs said he did not know if he had the support on the village board or from fire chiefs to eliminate the fire council and relinquish control to a new village board-appointed fire commission.

Ryan said priority on the fire council should be given to village residents and said the disciplinary process should be reformed.

"There are some things we need to do to improve it,” Ryan said. “Whether it needs to be eliminated is something we need to discuss."