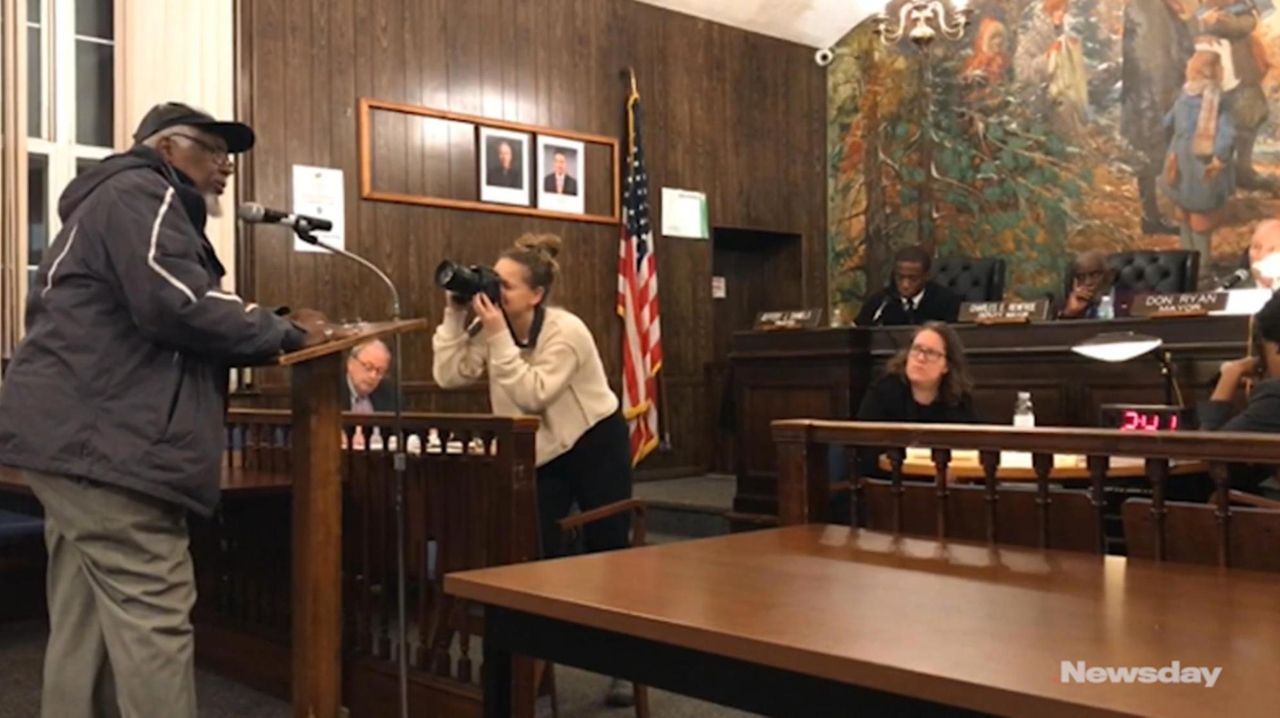 For 15 years, Reginal Lucas has been asking for the latest statistics on violent crime at Hempstead Village board meeting: an update on the latest violent crimes. Credit: Newsday / Jesse Coburn

When Reginal Lucas approached the podium at a Hempstead Village Board of Trustees meeting last Tuesday night, there was little doubt as to what he would say.

“Give me updates on the violent crimes that happened in the last two weeks,” he asked the board members and village Police Chief Paul Johnson.

The request came as no surprise, because Lucas, 76, has made the same one at nearly every village board meeting for the past 15 years.

The simple but persistent question from Lucas, a retired New York City transit worker, has become a hallmark of the village’s often raucous board meetings, prompting the occasional snicker from the audience for its sheer predictability.

But all the inquiries have had an impact, village officials acknowledge, citing as an example the decision in 2012 to install gunshot locator technology after Lucas had pushed them to do so for more than a year.

Such results are satisfying to the longtime Hempstead resident, but not satisfying enough to stop him from making his way to Village Hall every other Tuesday night to pose his question once more.

“Things happen in the Village of Hempstead, and we ought to know about it,” Lucas said in an interview. “It’s not only my desire to know. I want everybody to know.”

Extracting a public account from his elected and appointed leaders of crime in the village is a central motivation of the ritual, said Lucas, who is the president of the Hempstead Coordinating Council of Civic Associations and the Duncan Estates Civic Association. So, too, is making sure he gets his money’s worth as a taxpayer.

“I want to know where my tax dollars are going,” he said. “And I want to make sure that my police department is functioning.”

At the meeting, Johnson told Lucas there had been two confirmed shootings in the two weeks prior. The police chief said he comes to the meetings with village crime statistics in hand, anticipating Lucas’ questions.

“We usually give him the answers or whatever numbers we have,” Johnson said in an interview.

It was after more than a year of Lucas’ public comments at board meetings that the village decided to install ShotSpotter, which uses microphones to pinpoint the location of gunfire.

Lucas “probably deserves more credit than any one individual for the fact that we now have that in the village,” Mayor Don Ryan said.

But with shots continuing to be fired in Hempstead, Lucas says he has no plans to end his long-running inquiry.

“If I don't ask those questions, you'd never know that a person was shot,” he said.

Johnson said there have been four homicides in the village so far this year, down from six in 2017.