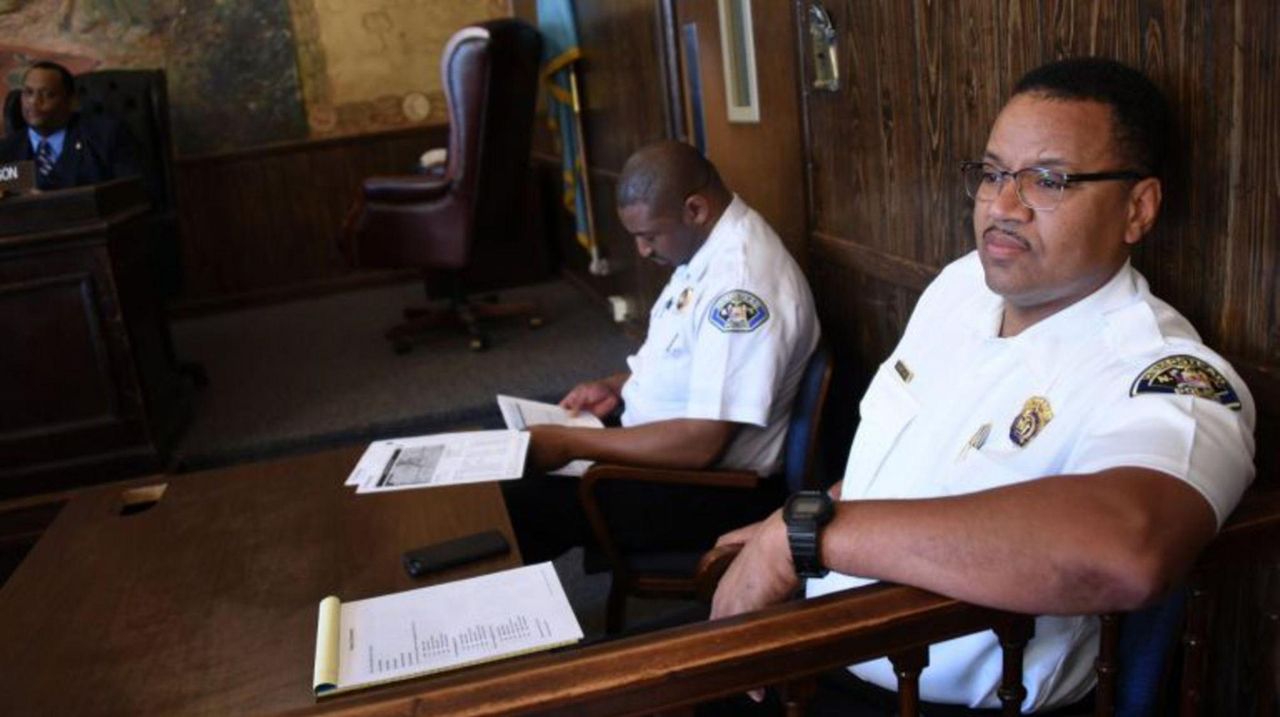 The Hempstead Village board of trustees appointed Lt. Patrick Cooke to be the police department’s acting assistant chief on Tuesday night, hours after the Nassau County Civil Service Commission released the chief’s test scores showing he had the lowest of six scores.

The board voted 3-2 on Tuesday to pass Cooke’s appointment to the second-highest position on the force. Trustees Jeffery Daniels and LaMont Johnson voted against the appointment.

The board had voted Cooke’s appointment down 4-1 on June 5 when only Mayor Don Ryan voted in favor of it.

Tuesday’s vote came after public comment from residents, discussion of the board from the dais and an executive session that Daniels proposed to discuss potential litigation on the matter.

LaMont Johnson — whose brother Lt. Lonnie Johnson Jr. scored third on the test — protested Cooke’s appointment because he scored the lowest on the test.

Cooke joins Acting Chief Paul Johnson and Acting Deputy Chief Richard Holland, who were appointed June 5, as the department’s top brass. Their positions were considered temporary at the time because the results of the Civil Service chief’s test had not yet been released.

Ryan said Tuesday night he had not received an official copy of the test results. The acting titles remain in effect for now and different lieutenants could ultimately be promoted to the permanent positions.

The top chief’s permanent position is based in part on his or her test scores and he or she must be one of the test’s top three scorers. The other two chiefs are appointed positions that keep the Civil Service rank of lieutenant; they are not required to take the chief’s test to be considered, Ryan said.

Johnson earned the top total score, followed by lieutenants Kevin Colgan, Lonnie Johnson Jr., Holland, Natisha Robinson and Cooke, according to a copy of the results from the Civil Service Commission. The test results expire in 2022. Robinson attended Tuesday’s meeting.

Ryan said in an interview he intended to vote to have Johnson, Cooke and Holland keep the jobs permanently.

The chiefs’ job salaries are negotiated by contracts. The appointments follow the May 31 retirements of former Chief Michael McGowan, Assistant Chief Joseph Sortino and Deputy Chief Mark Matthews. They will receive $1.6 million in severance payouts through 2022.

The department is grappling with the arrest of one officer and the sentencing of another to 3 years of probation, as well as allegations of racism and discrimination in promotions to the rank of sergeant.