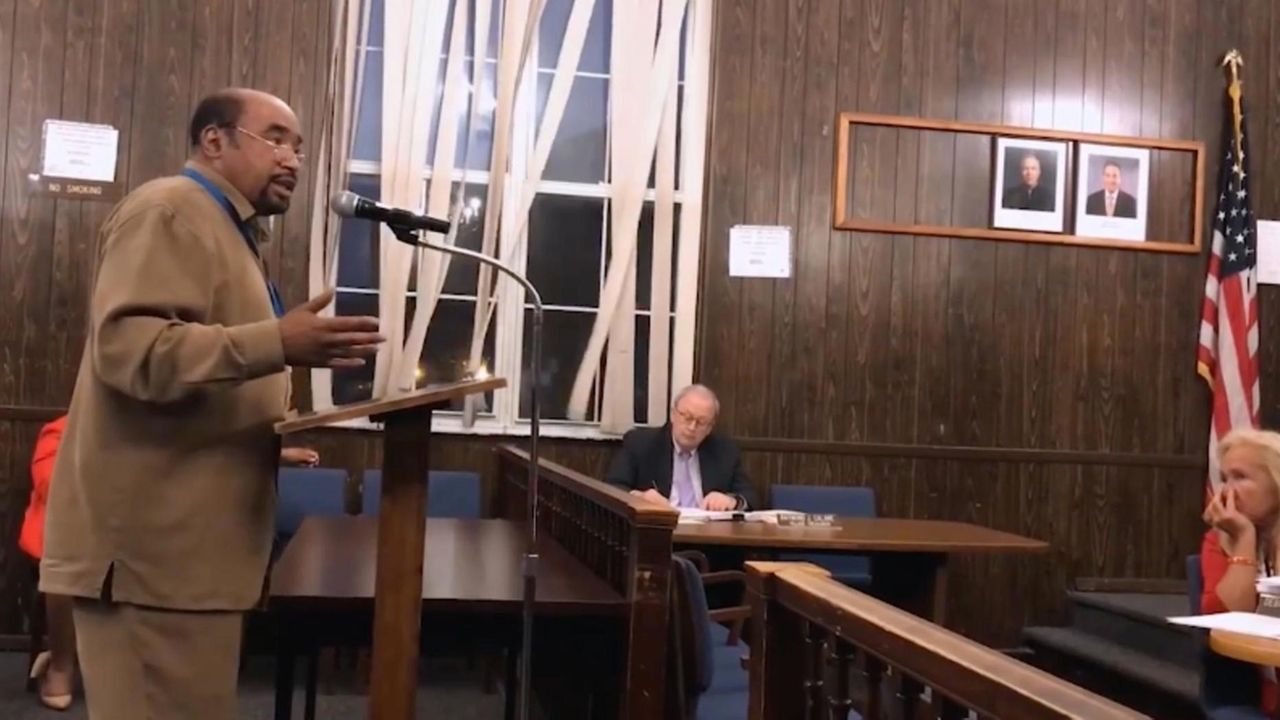 The Hempstead Village board of trustees on Tuesday voted to keep Police Officer Randy Stith on paid administrative leave after his arrest last month. Mayor Don Ryan first voted in favor and then abstained during a revote. Credit: Newsday / Stefanie Dazio

The board had already voted to do so at a May 7 special meeting, but had to vote again because the public had not been properly notified. Village Police Chief Michael McGowan had recommended that the board terminate the officer.

Stith, 27, also is a village school board member and remains on that body.

He is charged with falsifying a document to become a police officer and stealing more than $6,500 from the fire department’s Southside Hose 2 in his capacity as treasurer between 2015 and 2018. He was sworn in as a village police officer in June 2017 and is considered a probationary officer until his first anniversary on the force.

Stith was arrested April 25 on 13 charges and has pleaded not guilty. He was 19 when he served 5 days in jail after pleading guilty to a noncriminal harassment violation in 2010, court records show.

The village board voted unanimously again Tuesday to continue Stith’s leave. Mayor Don Ryan, who has called Stith his “godson,” accidentally voted in favor of the leave, but realized his error and abstained during a revote.

The vote was met with applause by members of the audience, several of whom spoke in favor of Stith keeping his job — including former assistant village police chief Willie Dixon.

“He has not been found guilty and, to me, it does not make any sense whatsoever to terminate someone based on an accusation,” said Dixon, alluding to the Nassau district attorney’s 2009 criminal investigation into him. That probe looked into what Dixon has called a “bogus burglary” in 2008 in which he ordered two subordinates into a home to remove a barking dog. The case was closed and no charges were filed.

Resident Dennis Jones, a retired NYPD detective who worked in internal affairs, said, however, that the board’s decision could set precedent for other indicted officers, calling it a “slippery slope” that could affect morale and bring future lawsuits.

Tuesday’s vote on Stith was a redo because the tally taken at a May 7 meeting was “not enforceable,” village officials said in a statement in response to a public records request on Tuesday. The May 7 meeting “was neither properly noticed nor documented . . . Moreover, there were no written agenda, resolution nor any other documents created in relation to this special meeting; everything addressed and discussed was oral.”

Cornelius Watson, chairman of the village’s housing authority, asked Tuesday at the board meeting if Stith could be allowed to work without using his gun so his $51,000 taxpayer-funded salary would not be wasted. Ryan said no.

Ryan said he would ask Fire Chief Steve Giardino to provide more information at a future board meeting.

The board’s agenda Tuesday had originally included giving a sergeant and two officers the designation of detectives and a small raise, but the item was pulled from a vote.

Village to vote on leave for arrested officerPolice officer Randy Stith has been on administrative leave since his arrest last month on charges of falsifying a document and stealing from the fire department. Residents sue district over trustee’s removalThe four plaintiffs say $405,000 was misspent on proceedings against LaMont Johnson, who later was reinstated to the seat. Police chief: Village won’t terminate officerHempstead's police chief said the village has decided against terminating Officer Randy Stith, who was arrested on charges he stole thousands of dollars from the fire department and falsified a document to become a police officer. Editorial: Hempstead board member should resignEvery vote Randy Stith takes from now would be suspect. He needs time to focus on his defense.

NY pols call for quick dredging of 'dangerously shallow' Jones Inlet
Demonstrators praise Blakeman's opposition to mask mandates
Pfizer board member: Likely no COVID-19 shot for kids under 5 until at least late March
Long Island forecast: Chance of snow overnight, and cold temps continue
Nassau assessments frozen for second year in a row
PSEG puts its plan to offer $1,000 vaccine incentive on hold
Didn’t find what you were looking for?