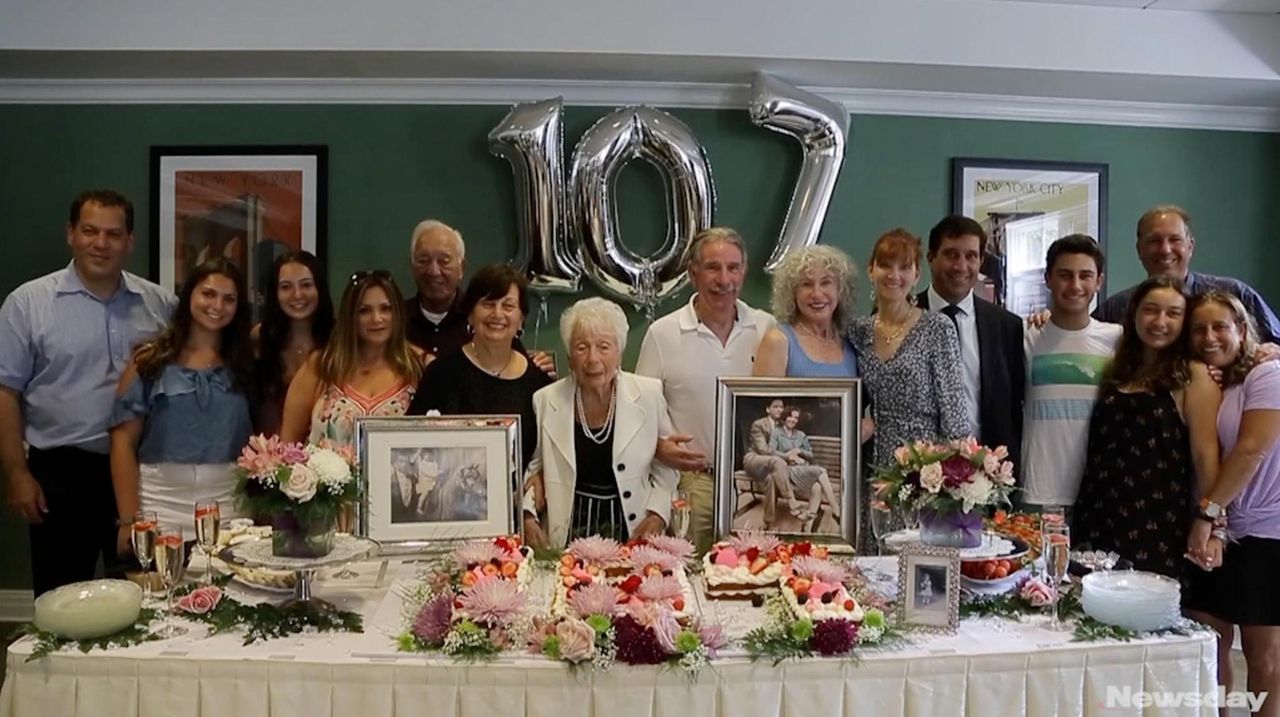 Henrietta “Henri” Dobin lives a normal, busy life. She works at a museum two days a week, plays bridge and bingo at her assisted-living facility, spends half an hour each morning choosing her outfit for the day and never fails to apply her makeup.

On Thursday morning, she took extra care as she dressed up to celebrate her 107th birthday with her children, grandchildren, great-grandchildren and friends at The Bristal assisted-living facility in North Woodmere.

“She’s a diva, really,” Dobin’s daughter, Myra Markowitz, 80, said. “She loves clothes, she loves to look good. I’m happy that I still have her.”

Although Dobin’s birthday is not until Friday, the Bristal staff members decorated the facility's large living room with flowers, cake, champagne flutes and large silver balloons announcing her age on Thursday. Dobin’s paintings were displayed on the patio outside, and guests were encouraged to stroll through the makeshift gallery.

“You couldn’t ask for anything more,” Dobin said. “It’s wonderful.”

In her 107 years, Dobin has lived through many monumental changes in the world, from the sinking of the Titanic and World War I to women’s suffrage and the Great Depression, her grandson Richard Markowitz, 51, of Merrick, said in a speech.

“My grandma belongs to a very special membership of an elite generation that saw remarkable change in the world,” he said. “Many look at these members as old and unimportant, but that is not the case for Henrietta Dobin. Grandma is a force that you better not cross.”

Dobin traveled to nearly every continent with her husband, Solomon, who died in 1990, hitchhiked from New York to Texas during the Depression, raised two children and worked at the Brooklyn Standard Union newspaper and the Nassau County Museum of Art, where she has been a volunteer for 20 years, her grandson Mike Markowitz, 54, of Long Beach, said.

Julius Harris, weekend staff coordinator at the museum, took a moment to thank Dobin for her hard work and present her with a framed certificate of appreciation on behalf of the museum.

“Her sense of responsibility to her job is admirable,” Harris said. “She brightens everyone’s day.”

When Dobin isn’t at the museum, she’s organizing bridge and canasta groups, said Latavia Ross, executive director at The Bristal. While she may be the facility’s oldest resident, she remains young at heart and frequently complains that The Bristal is full of old people, Ross said.

“Grandma, you are a true inspiration,” Richard Markowitz said. “You have not only taught us the secrets of longevity, you have shown us how to live.”