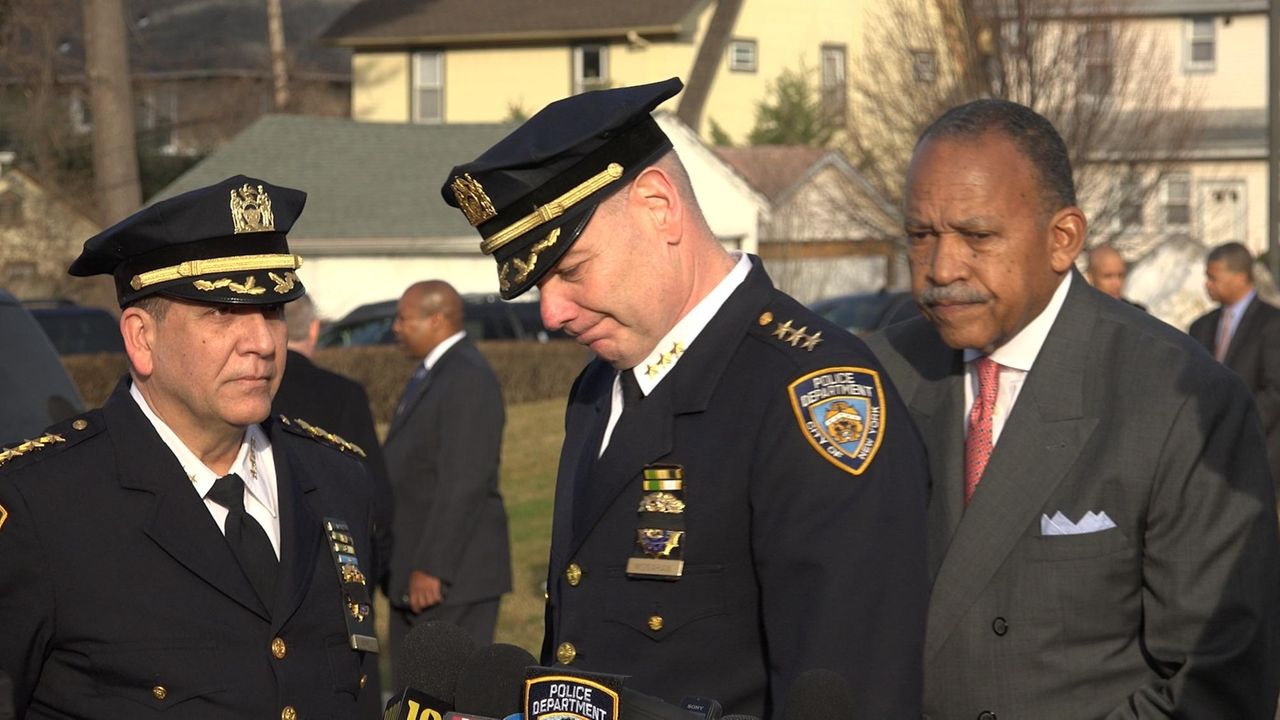 Hundreds of mourners, both young and old, some in police uniform, filed slowly into a cavernous room of a Rockville Centre parish Wednesday afternoon, a show of respect for a giant of a man in blue.

Top brass in the NYPD stood in line at Saint Agnes Parish Center for a viewing along with others who loved and admired Det. Steven McDonald of Malverne, a veteran officer left a quadriplegic after a line-of-duty shooting in Central Park three decades ago.

McDonald, 59, died Tuesday at a Manhasset hospital, four days after he suffered an apparent heart attack.

The bullet fired by the 15-year-old shooter during that July, 1986 encounter, robbed McDonald of his ability to walk and, for a time, speak but not his desire to serve and forgive.

Instead, McDonald’s injury became a springboard for him to preach to high school students, community members, and fellow NYPD officers about the power of forgiveness and resiliency. Eight months after the shooting, McDonald forgave, Shavod Jones, the teenager who shot him.

McDonald was promoted to detective and lieutenant and remained a member of the NYPD until his death.

Many of those who turned out Wednesday noted that McDonald’s unending selfless service to his police brethren, his family and his community, exemplified the best of what is the nation’s largest and most prominent police department.

“Steven is the heart and soul of this police department,” NYPD Commissioner James O’Neill said in brief comments made outside the center, adjacent to Saint Agnes Cathedral. “For the past 30 years, Steven never quit. He continued to be a man of faith and to preach peace. And I think that’s so important, not just for everybody in the police department, for in this city and in this nation.”

Visitation continues from 7 to 9 p.m. Wednesday and, on Thursday, from 2 to 4 p.m. and 7 to 9 p.m. North Village Avenue is scheduled to be closed from 1 to 10 p.m. both days between Quealy Place and Randall Avenue, officials said.

A full NYPD funeral with an expected 5,000 in attendance is planned for 9:30 a.m. Friday at St. Patrick’s Cathedral in Manhattan. Cardinal Timothy Dolan, a close friend of McDonald, will officiate, said a spokesman for the Archdiocese of New York, and officials are expecting mourners from England, Ireland and France.

The NYPD ceremonial unit will provide eight pallbearers to carry the coffin.

Inside the center Wednesday, as many as 150 people engaged in light chatter interrupted by bursts of laughter.

One photo showed McDonald, a Roman Catholic, receiving a blessing from Pope John Paul II. In another the New York Rangers devotee stands with Mark Messier, the legendary captain of the 1994 Stanley Cup championship team.

Other pictures featured McDonald and his beloved family, including candid moments at home. A black and white image stirred memories of the day that changed McDonald’s life forever — John Cardinal O’Connor holding a prayer service with the critically wounded cop inside his hospital room not long after he was shot. And still another spoke silently of the devotion to McDonald from his wife Patti — her eyes gazing with love at her husband in his hospital room, the sign “We’re all pulling for you” attached to a wall in the background.

“He’s no longer with us, but his spirit still survives,” said First Deputy Commissioner Ben Tucker.

Chief of Department Carlos Gomez said the loss was felt beyond the NYPD.

“Not only is our department in deep mourning, so is law enforcement throughout the country,” Gomezsaid. “An example of strength, he was stronger than any of us here.”

After being on life support since he fell ill Friday, McDonald died at about 1:10 p.m. Tuesday surrounded by his wife, who is the mayor of Malverne, and their son, Conor, an NYPD sergeant.

McDonald was known for giving inspirational talks at public and parochial schools about what it means to forgive.

“Steve was a special person,” said NYPD Chief of Patrol Terence Monahan. “There was no one else like him anywhere else. He may be gone but he’s going to live forever in our hearts.”