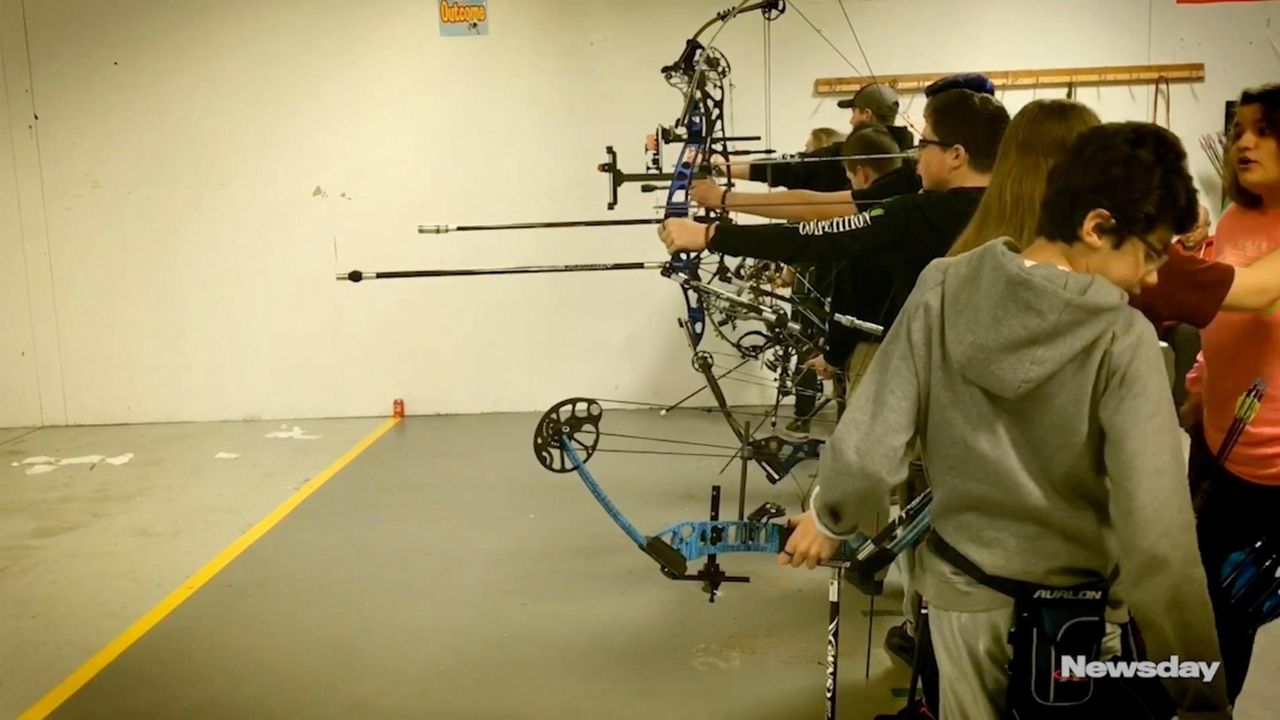 C&B Archery closed Sunday after 13 years amid new code requirements by the town of Oyster Bay. Owner Ralph Allocco said he could not afford to do the improvements the town was requiring, such as repave and stripe the parking lot, install outdoor lighting and add Americans with Disabilities Act-compliant bathrooms and drinking fountains. Credit: Newsday / Ted Phillips

A final volley of arrows flew through the air on Sunday to their targets at an indoor archery center in Hicksville.

Hundreds of children, parents and archery enthusiasts went to C & B Archery for the last time, to share burgers, memories and tears before the 13-year-old center closed its doors for good. Owner Ralph Allocco, 71, said the costs of Oyster Bay town code compliance presented to him recently were more than the company could afford.

“We did everything that the town required, and now the town is asking for more,” Allocco said. “I cannot afford to do anymore.”

Allocco said his architect told him three months ago the town is requiring him to repave and stripe the parking lot, install outdoor lighting, and add Americans with Disabilities Act-compliant bathrooms and drinking fountains. The work would cost from $75,000 to $100,000 on a building he leases, he said.

Allocco said he did everything the late town planning commissioner, Frederick Ippolito, had asked for, including taking aerial photographs, creating architectural drawings and surveys, and taking soil samples. Ippolito died in federal prison in 2017 while serving a sentence for income tax evasion.

“I spent $55,000 and I thought I was done when I came before the town board and they approved the archery store,” Allocco said.

Town records from 2016 show the site plan, dated April 12, 2010, had been reviewed and approved by deputy planning commissioner Timothy Zike. At the end of a July 26, 2016, hearing for a special-use permit for the center, Town Clerk James Altadonna Jr., reading memos from the planning department, said, “There is no code compliance cases, no variances on the subject premise” according to a transcript. The board unanimously approved the permit on Nov. 29, 2016.

Nevin said he could not comment on what happened in 2016. “I can’t speculate on the prior administration,” he said.

For the hundreds of archery enthusiasts who used the center, its closing came as a blow.

“It’s a big hit for us,” said Mikael Alfredsson, 40, a construction supervisor from Levittown. “We shoot here as a family.” Alfredsson’s two sons started archery, then he and his wife took it up as well.

Julie Penninipede , 14, said she took up archery after seeing the movie "Hunger Games" in 2014 and now shoots six times a week and has competed around the country.

“All my friends are here,” Penninipede said.

Former Olympic archer Hazel Greene, of Glen Cove, 58, said she’s watched children grow up at the center, where she practiced and offered pointers to younger archers.

“This was a huge community,” Greene said. “It’s a great loss to the kids.”

2:15 Cuomo: NY pushing toward reopening, agreeing to limit COVID-19 powers
How to get a COVID-19 vaccine appointment
2:29 Looking back one year, 'I see that I am one of the lucky ones'
Alzheimer's Association hosting free virtual seminar on legal, financial planning
Third COVID-19 vaccine arriving in NY as soon as today
Wantagh High closed after new virus cases surface
Didn’t find what you were looking for?