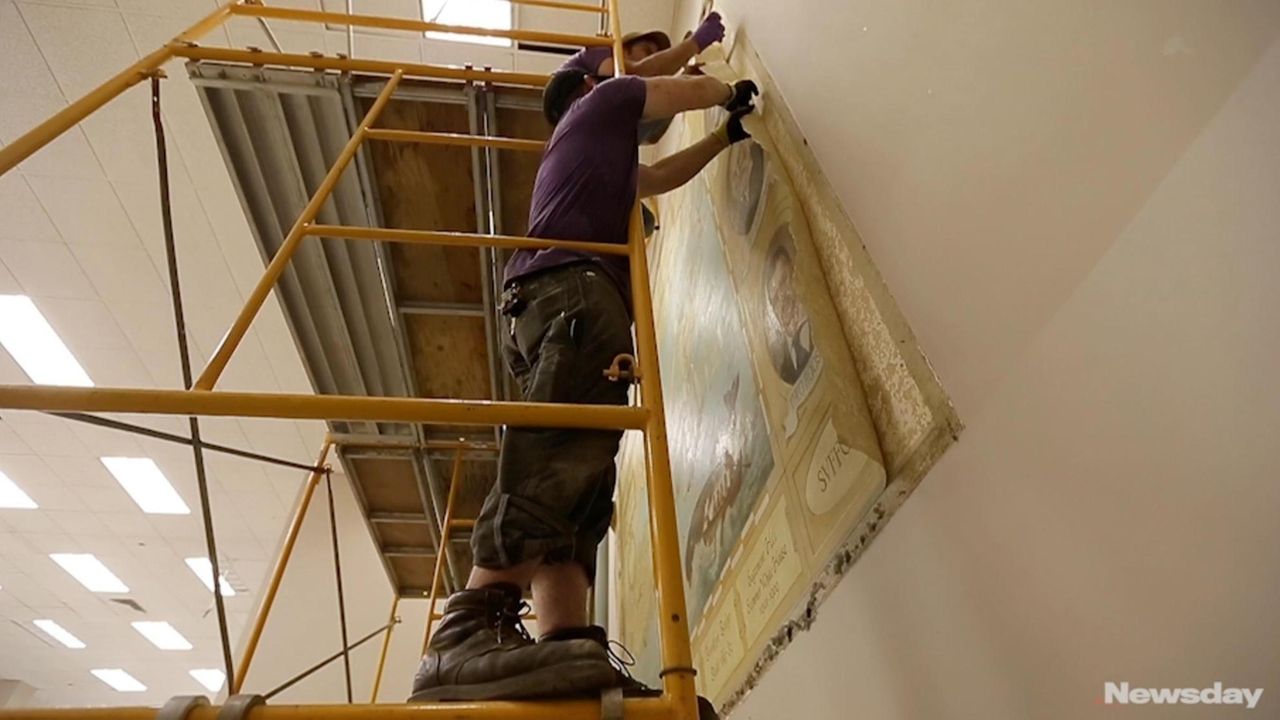 Removal of the historic mural on a wall at the closed Sears store in Hicksville began Thursday. It is to be restored and displayed elsewhere.  Credit: Howard Schnapp

A beloved mural that rested for decades in a Sears department store that closed in April will have a new home in Hicksville.

The massive painting of Long Island, which residents say has hung in the store since the 1960s, will be removed from the site beginning Thursday and installed at the Hicksville Athletic Center, Oyster Bay Town Supervisor Joseph Saladino said.

“It’s good to hear that they could save this piece of history,” said Derek Stadler, president of the Hicksville Historical Society. “I think everybody’s fear was that it was just going to go to waste.”

Residents began to worry about the fate of the oil painting, which was created by prolific Manhattan-based artist G. Hunter Jones, when it was announced the store would close. After dozens inquired about preserving the piece, officials scrambled to find it a new home.

The canvas is adhered to the foundation with glue. Over the next two days, a crew will carefully peel it off. pic.twitter.com/KjiE2SVWIA

A handful of places were proposed in April, including the Town of Oyster Bay Ice Skating Center in Bethpage and Hicksville High School. The athletic center was chosen because it’s large enough to accommodate the painting, which measures 9 feet by 16 feet, and is just a few blocks from the old department store in the “heart of Hicksville,” Saladino said.

“It will be protected and preserved and this way we can rehang it in a manner in which all Long Islanders will be able to enjoy it,” he said.

Seritage Growth Properties, a real estate investment trust that owns the building, will pay more than $30,000 for the removal, restoration and installation of the mural, a spokesman said.

Materials Conservation, a Philadelphia-based company, will remove the canvas over the next two days. The painting, which depicts a historical map of Long Island surrounded by portraits of some of its most famous residents, was attached to the foundation with glue, according to Seth Gartland, a project manager for the company.

Gartland said the canvas appears to be in good shape, though covered in decades of dust. A crew will clean the surface and is expected to install the piece near the athletic center’s basketball court in mid-November.

Materials Conservation also handled the removal of a similar painting in a Sears in Watchung, New Jersey, that was painted by Jones.

The artist created dozens of paintings in Sears stores across the country that captured some aspect of each one’s local history. As more of the department stores close nationwide, Jones’ son, Stephen Jones, said he’s grateful to see the Long Island mural spared.

“I think it shows how important it was to the community,” said Stephen Jones, 66, of Manhattan. “And I’m extremely happy that we’ll have this to look on as part of my father’s legacy.”