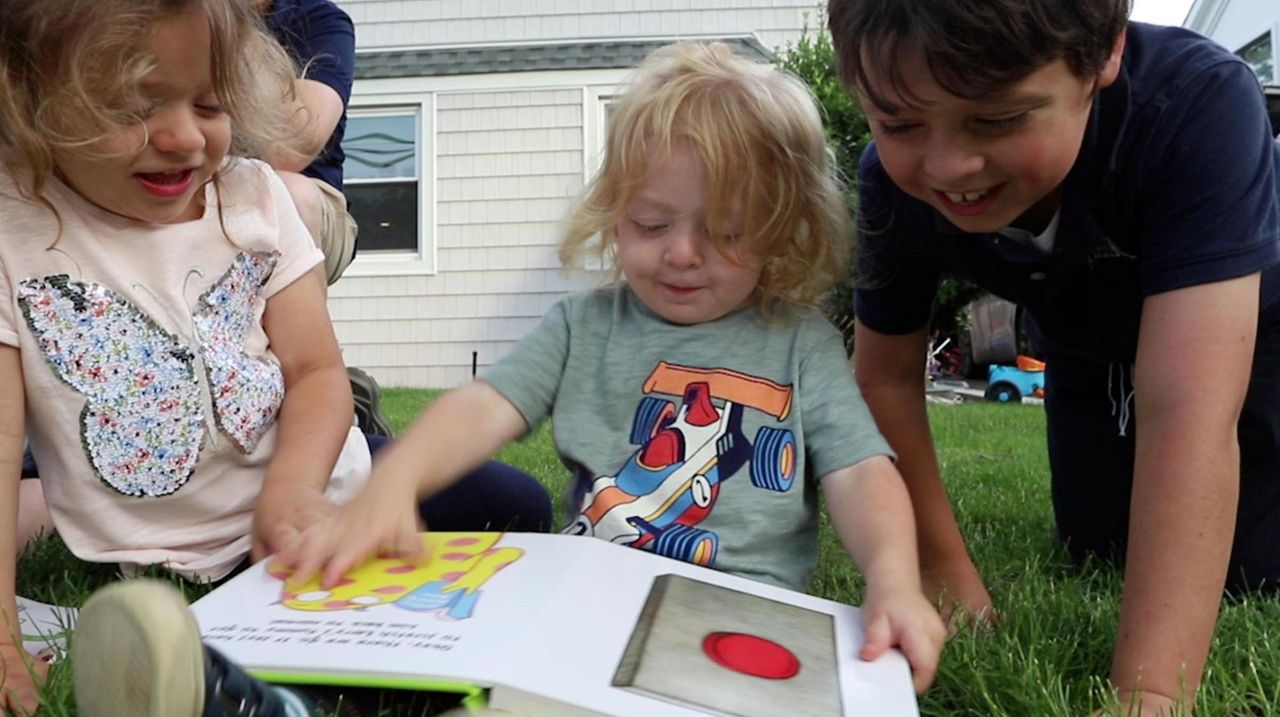 Hindi’s Libraries is a Cedarhurst-based nonprofit that matches books with organizations supporting children and families. It was created in the memory of Hindi Krinsky, a 32-year-old mother of five who was an English teacher and loved to read. Credit: Linda Rosier

Often those who have lived rich, long lives are celebrated through scholarship contributions or “in lieu of flowers” donations.

An equally heartfelt, but more hands-on commemoration was sought for Hindi Krinsky, a Long Island English teacher, lover of reading and mother of five who lived a rich — but far too short — life.

Taking a page from the book of Krinsky's life, a plan developed in November to honor her with four little free libraries — picture large, colorful house-shaped boxes of gently used volumes, ones young readers could just grab at will.

So far, two of the little libraries have been placed, with more to come, at the Hebrew Academy of the Five Towns and Rockaway, the coeducational yeshiva in Lawrence where Krinsky taught and her children attend.

Krinsky, 32, was the newly appointed curriculum coordinator at the Hebrew Academy when she died unexpectedly in August 2018.

“It was like, we’re doing this cute thing,” said Leslie Gang, 34, of Hewlett, a former colleague, who’s partnered in the endeavor with Krinsky’s husband, Dovid Kanarfogel. The project had other ideas, though, and it eventually “blew up in our faces, in a great way,” Gang said.

Eight months later they’re overseeing Hindi’s Libraries, a Cedarhurst-based nonprofit that matches books with organizations supporting children and families who otherwise might find it hard to spring for a steady stream of such volumes.

So far, that’s been to the tune of more than 15,000 titles donated since January, heading to some 250 groups in more than 40 states.

Bookworms-to-be have this to say: “We are learning how to read and how to love reading,” said a thank-you note from students and teachers at IVDU Long Island Elementary School in Valley Stream. “Your book donation provided us with so many special books to read, learn from and enjoy.”

So, what might Krinsky herself make of all this?

“I think she’d be mind-blown — not just happy, but like in shock, wow, wow, wow,” to know that because of her this far-reaching effort is “making these books available to kids who may not otherwise get them," said her friend and colleague Jennifer Winkler, director of dramatic arts in the academy's high school.

Winkler sees the nonprofit as carrying on Hindi Krinsky's literacy work and impact, the good “she was meant to do on this earth.” Added Winkler, while “that, to me, will never replace her, it is something.”

The effort started with gently used contributions from area families, but at Gang’s invitation, publishers have come on board, most recently Disney Publishing Worldwide, which has been sending 15 to 20 boxes of books a week. And that's with no end in sight, she said.

Also now arriving in the likes of trash bags, Bloomingdale’s bags and diaper boxes are donations from families all over Long Island, where there are five drop-off locations. Others are in Brooklyn; upstate New City; and Teaneck, New Jersey.

With about 700 to 1,000 new and used volumes arriving each week, the book-processing operation is humming — in Gang’s garage, Kanarfogel’s Cedarhurst den and, more recently, a nearby storage unit.

An account executive with the U.S. Department of Housing and Urban Development, Kanarfogel, 35, is raising the couple’s young brood — 9-year-old triplets, a 4-year-old and a 2-year-old. Hailing originally from Teaneck, he and Hindi, who was from Brooklyn, moved to Cedarhurst in 2012.

In the quiet hours after his kids’ bedtime, volumes ranging from such popular selections as Nancy Drew mysteries to “The Adventures of Captain Underpants” get sorted by reading level, scanned for damage and anything unsuitable, then packed and labeled for shipping.

Inside each cover Kanarfogel affixes a dedication label sharing the mission of his wife, who, he said, died of an unexpected complication from Crohn’s disease.

With each marker carrying her picture, “I get to see Hindi’s face every time I put on a label,” he said. As for all that nighttime work overall, “it’s something I can do with my brain, when I don’t know what else to do with it.”

Of special note, he said, is the effort to help those young recipients keep their heads held high. To that end, there’s no reference in the label to books going to “families in need,” because “what’s that saying to a child?” And volumes with too many torn pages, for instance, are sorted out of the mix. The idea being that “the kid getting the book may know it’s used, but still feels proud to get it.”

His children, who refer to the stacks as “mom books,” also lend a hand, taking pride in the numbers pouring into “mom’s library,” with boxes being shipped as far as Israel and Hawaii.

As for the original plan, two of the four little free libraries — filled with donations from the school community only — have been placed on the Hebrew Academy campus, with the next one set for dedication in the fall. On the underside of each are drawings by his children, who can make a more "personal, intimate connection" with their mom in that out-of-sight location.

“They’re a part of it,” he said, and each time they walk past, they’ll know it.

Krinsky, who earned a doctorate in literacy education from Rutgers, loved stories, storytelling, talking about a culture of reading and reeling students in just about any way she could, he said. Her dissertation, titled in part, “Reading Outside the Comfort Zone,” explored the classroom use of graphic novels.

“All reading is good,” was her starting point, Kanarfogel said, with the backs of cereal boxes included, as it’s all about “training the eye to follow language.”

Indeed, Winkler said her friend Krinsky “was not a snob about what people would read” and playfully referred to herself as a “doctor of comic books,” given her graphic-novel studies. For some, Krinsky saw the likes of comic books as a gateway to literacy.

"Her superpower was an innate algorithm of personal recommendations" for students or others, her friend said. "She knew her customers. Personally, she gave me, 'My Favorite Thing Is Monsters' by Emil Ferris," Winkler said, "which is lying here on my night table."

Love it though she does, Winkler said she’s reluctant to proceed with the final chapter, as in some way that would sever an element of the bond with her friend.

As for the massive book drive, Kanarfogel and Gang do pickups several times a week, at least for nearby Nassau locations, from Long Islanders looking to do good, as well as to empty book shelves of their kids’ old favorites.

“He’s a rock star,” Gang said of Kanarfogel. With all the hurdles he’s handling, “there’s nothing he’s not succeeding at. I don't know where he gets his strength from.”

Kanarfogel, in turn, said Gang has been “the powerful force behind every aspect of this project.” He points to her patience and her becoming “a great friend . . . at a time when I don't always have a lot of capacity to be the most responsive friend in return.”

The two knew they had come upon a void they could fill after one What’sApp blast in November to the school’s community resulted in 150 books dropped off within a week, Gang said. She's now communications director for the Brandeis School in Lawrence, offering general studies and Judaic curriculum for nursery to eighth grade.

That led them to ask, “What’s going on?” and “Could there be a bigger thing?” Hence, the blossoming of a more expansive vision, she said.

It was back in January that Alissa Repetti got wind of the book giveaway. As early childhood senior specialist with the Child Care Council of Nassau Inc., she’s in a perfect position to help find homes for children's reading material. The nonprofit advocates for early childhood care and learning, and provides resources to parents and guardians as well as care providers.

Looking forward to another donation, she estimated she has received and passed along some 1,200 books for the 11-year-old and younger crowd to various care providers that the council supports. The care providers in turn dole them out to eager little hands in their care.

The biggest delight for her as providers sift through titles is hearing them say, “Here’s a book about firefighters. Samantha loves firefighters,” Repetti said, referring to one of their little charges.

Books these days can be pretty pricey, Repetti said, and “it’s a wonderful gift” to support providers whose budgets may not be all that robust.

With Gang pointing to requests for an estimated 600 boxes, a further do-good opportunity has arisen — sponsoring for $36 the shipment of one box of about 60 volumes. Such postage patrons can have their names and messages included on the outside of the package — logos, too, if they’re a business, along with a social media shoutout.

Looking ahead, Gang speaks of plans to apply for grants that would cover the cost of shipping, storage and supplies. “Our goal,” she said, “is to continue to be able to offer books — completely free of charge — to any organization that asks.”

As for the project’s near instantaneous ignition, Gang cites a couple of factors at play, one being the value parents place on books because of the bonds they help form with their offspring.

There’s also a strong drive to do good in the world. Yet, she said, who has the time to, say, volunteer at the school three hours a week? With title after title piling up through the years in parents' attics and spare rooms, donating to the Hindi initiative is "an easy way for people to do good,” getting their used books into the hands of children.

As described on Hindi’s Libraries’ Facebook page, while she was making an early June pickup in Woodmere, a man shouted from his car window to ask Gang what kind of books she wanted. On hearing they were children’s, he parked, opened the trunk and “proceeded to fill our SUV with more than 10 bins, boxes and bags of children’s books that he had collected from his home.”

Not interested in any expression of appreciation, “he kept thanking us for finally allowing him to empty his trunk.”

Kanarfogel hypothesizes that a Marie Kondo organizing blitz could also have played a role.

Bottom line, though, Hindi’s Libraries is “an outlet for people to feel good,” he said. “It’s not as much letting go of a memory, as letting a new kid have a memory.”

Among the books she taught in class:

• “Persepolis: The Story of a Childhood,” by Marjane Satrapi

• “To Kill a Mockingbird,” by Harper Lee

Also a big fan of:

Carried on first date with her future husband:

Books of poetry by William Butler Yeats and Mayim Bialik

Also a “superfan” of:

Last book she was reading:

“The Left Hand of Darkness,” by Ursula K. Le Guin

Be part of the story