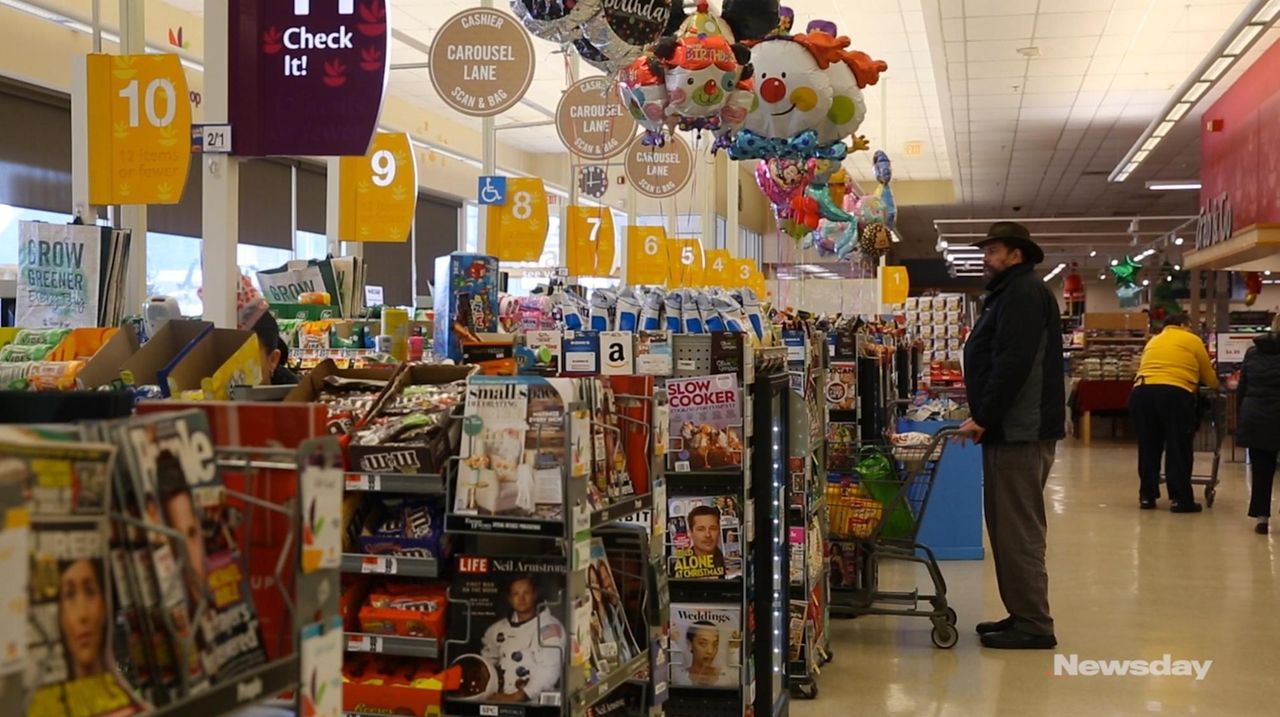 Nassau County police and People's United Bank officials slipped stickers reading "keep an eye on your purse" onto unattended shopping carts Thursday at a Woodbury supermarket. The officials sought to show how easily a would-be thief could take something from a distracted customer. Credit: Newsday / Shelby Knowles

Members of the police department, as well as officials from People's United Bank, slipped stickers reading "keep an eye on your purse" onto unattended shopping carts throughout the Stop & Shop on Jericho Turnpike.

"In that time it took to put a sticker on the cart, their wallet or pocketbook could have been stolen," Det. Daniel Haggerty said.

Purse-snatching and other thefts tend to increase during this time of year, he said. Police statistics on such thefts were not immediately available.

Thieves look for distracted customers so they can easily grab a purse, wallet or cellphone and slip out of the store unnoticed, Haggerty added.

"It spikes around the holidays," he said.

Angela DeLeon, a crime prevention specialist with People's United Bank, said Thursday's event was the bank's first on Long Island. The bank does similar awareness campaigns in other supermarkets where they have branches, she said.

"My advice to you is to not carry a purse in a store," she said. "We're seeing a lot of people who are not paying attention to their pocketbooks."

But if it's necessary, she said the purse should be belted onto the shopping cart's child seat.

Betty Bohart, 76, and her husband, Richard Bohart, 75, both received stickers while shopping on Thursday. The North Carolina couple is visiting their daughter, who lives in Cold Spring Harbor. Betty Bohart got a sticker while looking for vegetables, while Richard got caught leaving his wife's purse in an unattended cart while he grabbed some coffee in Aisle 12.

Joyce Zaretsky, 74, of Huntington Station, was helping another customer in the meat department when her second sticker of the day went on her cart.

"I'm usually so on top of this," she said of keeping her eye on her purse. She said she had previously told other shoppers when their pocketbooks were unattended.

Meredith Glenn, 46, of Syosset was surprised with a sticker as she grabbed a salad for her family. She said she should be more careful since her cellphone was previously stolen in the store.

"I wasn't really paying that close attention" on Thursday, she said. "I'm usually just looking at prices and looking at different options."