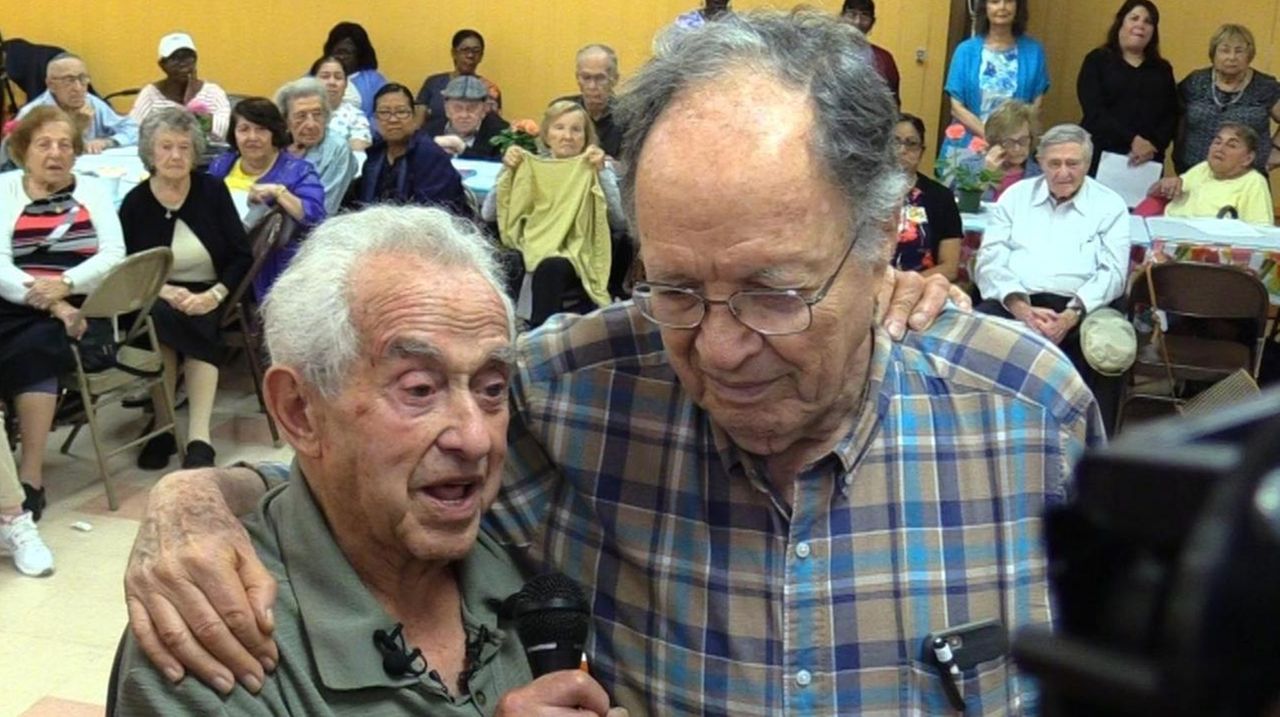 On Thursday, June 21, 2018, Bernard Igielski, a Holocaust survivor, met a relative of the doctor that saved his life in Auschwitz. Igielski reflected that he never spoke of what happened to him and what it meant to be a survivor. Credit: James Carbone

For so many years, Holocaust survivor Bernard Igielski wished he could thank the Jewish doctor who saved him again and again from the gas chambers of a Nazi concentration camp.

On Thursday, his wish came true, at least in the best way possible. While that doctor died years ago, Igielski, now 91 and living in North Woodmere, was able to reach out, embrace and kiss the cheek of one of his relatives.

For a long moment, Igielski was breathless with emotion. His mouth moved silently and his lips quivered as he tried to condense a lifetime of gratitude into words.

“Thanks to you. I hope you accept that,” he said as the two men shared a long hug at The Marion and Aaron Gural JCC in Cedarhurst.

Igielski told him, “I feel this doctor gave me life.”

The relative, Joseph Kohn, 86, of Princeton, New Jersey, was clearly overwhelmed as he met the man who would not be alive save for the bravery and the ingenuity of his relative, Dr. Berthold Epstein.

Epstein actually saved Igielski’s life four times while he was at Auschwitz and its surrounding concentration camps.

When Igielski arrived at Auschwitz as a 16-year-old boy, the notorious Nazi Dr. Josef Mengele, the camp physician known as the “angel of death,” saw a rash on his body and sent him into quarantine.

On three occasions, Nazi soldiers came into the medical facility and directed the patients toward the gas chamber. Each time, Epstein hid the teen by slipping him out the back door, sparing him from death.

Over time, Igielski was discharged into the general population of the concentration camp. Sometime later, he was chosen for the gas chambers and put in line to the entrance.

By chance, Epstein walked by and saw him. He told the Nazi officials that the boy could work, and Igielski was transferred to another labor camp.

“I was always lucky. Miracles happen to me,” Igielski said.

While at Auschwitz, Epstein was compelled to assist Mengele with experiments concerning treatment of noma, a disfiguring and potential fatal form of malnutrition-induced gangrene, said Katharine Gorsuch, education director at the Foundation for Holocaust Education Projects.

Epstein told Mengele that the experiments would be of more benefit if they gave the patients more food and better living conditions, she said.

Gorsuch said she believes Epstein may have helped Igielski as a way to do some good amid such despairing circumstances.

“Because he saw these things, and saw so many people perish, when he could help somebody, he did,” she said.

Igielski and Kohn were brought together largely through the efforts of the Foundation for Holocaust Education Projects, based in Florida.

“It seemed like a dream come true not only for them, but for the public,” Gorsuch said.

Igielski is a member of the Holocaust survivors group at the Marion & Aaron Gural JCC, which is funded by the UJA Federation of New York.

Kohn explained his relationship to the doctor, saying that “my mother’s first cousin was his wife.”

He said Epstein had been a prominent physician before the war. When he was taken to Auschwitz, his wife was killed, and the Nazis told him that he would live longer if he served as a doctor there.

After the war, Epstein once again became a successful physician. He married a woman who was a Holocaust survivor and adopted her daughter. Kohn said he tried to contact the daughter for this meeting, but she has Alzheimer’s disease.

Igielski, for his part, came to America after the war. He served in the Army during the Korean War and worked in the garment industry when he returned. He attended Thursday’s event with his daughter Helene Igielski and 11-year-old-grandson Jacob, of North Woodmere.

Kohn, a retired Princeton math professor, said he was happy to learn more about his storied relative.

“I’m very surprised and very pleased that he behaved so well,” Kohn said.

Igielski said if he could meet the doctor today, “I would kiss his feet.”