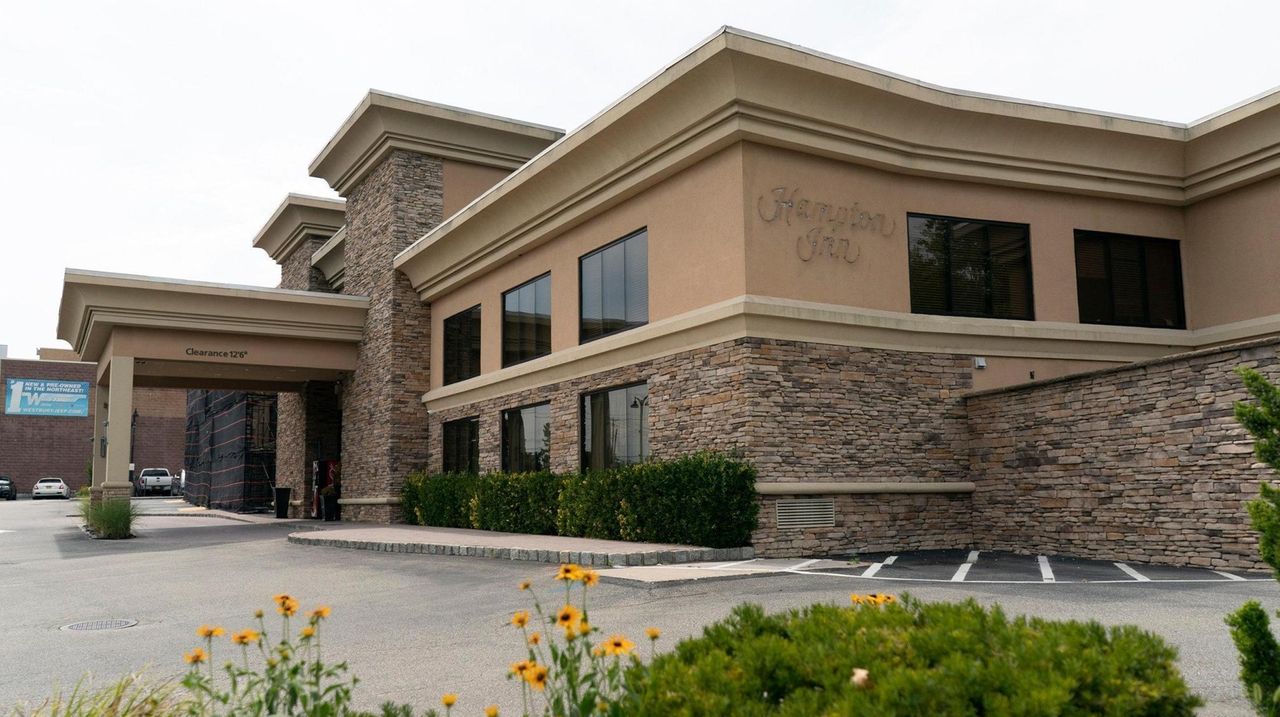 Laura Curran spoke at a news conference Thursday at a Hampton Inn on Jericho Turnpike in Jericho about converting the former hotel into a transitional housing facility. Credit: Charlie Eckert

Eighty homeless families in Nassau County are expected to move into the former Hampton Inn on Jericho Turnpike next month, marking a new transitional housing facility county officials said will help families in need during the pandemic.

“We’ve seen a lot of food insecurity, and we are also seeing a lot of housing insecurity,” County Executive Laura Curran said Thursday as she stood in front of the vacant building. “We want to make sure that everyone gets what they need to make it to the other side.”

The housing site at 120 Jericho Turnpike in Jericho will be operated by Community Housing Innovations, a nonprofit with offices in White Plains and Patchogue, officials said. Its operating cost is covered by an annual $6 million in funding from the New York State Office of Temporary and Disability Assistance, which will regulate and inspect the facility.

The plan, which was not publicly disclosed until Thursday, drew criticism from some Jericho residents who didn’t hear about the project until July 23 in a board of education meeting, prompting concerns over tax burden, safety and crowding in schools.

“Nobody in the local community knew anything about it until last week,” said Wei Zhu, who has two daughters in the Jericho school system. “They should’ve held a public meeting for this project. At least let us understand what’s going on.”

Melissa Wang, who has twins in a Jericho elementary school, said she was concerned about the tax implications and the impact of an influx of school-age children on the district. Wang asked officials to hold a public meeting so community members can have their questions addressed.

“Nobody is telling us how many students will come, how long they will stay and how the school will handle this,” Wang said Wednesday. “Personally, I don’t object to this program. But … without a corresponding plan, it’s not fair to us. It’s not fair to the families [that will be sent] to the facility.”

Curran said there will not be any financial impact on Jericho residents when the school district takes in new students.

“We are estimating, right now, that 19 children, K through 12, will be going to the Jericho school district,” she said. “But the money is paid for by their home district. So it’s not Jericho taxpayer dollars.”

With more than 100 homeless families living in motels, county officials said most of them will be relocated to the transitional facility. The new site will be equipped with security features and services including meals, child care and job training.

As the coronavirus pandemic continues, Nancy Nunziata, commissioner of the county’s Department of Social Services, said the county is bracing for an increasing need of housing.

Because the $600 supplemental weekly federal unemployment benefits expires Friday, “we have further concern [on whether] people will be able to sustain themselves while they are out of work," Nunziata said.

Officials emphasized that placing homeless families in transitional housing is more effective in getting them to obtain permanent housing. A family’s typical stay in a motel is about two years whereas the length in a transitional facility is six to eight months, officials said.

“This is a good investment,” Curran said. “I would argue this is a better investment than just sticking a family in a motel without the services and without the security that will be here."