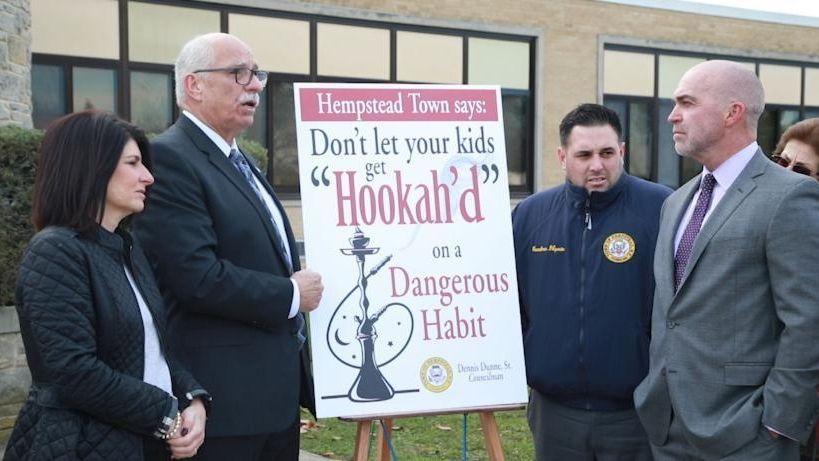 Hookah lounges in the Town of Hempstead would be restricted to light manufacturing and industrial zones, under legislation that town councilman Dennis Dunne Sr. is proposing Wednesday, Dec. 6, 2017. Credit: Newsday / Yeong-Ung Yang

Dunne is to call to schedule a future public hearing during the Town Board’s meeting on Dec. 12. His bill would only apply to hookah lounges that would open in the future or are amid opening — not lounges that are already open or any establishments in villages. It would also restrict the sale of other substances sold in vape shops in unincorporated areas, such as Juul e-cigarettes and kratom.

“People say the town council’s supposed to only worry about potholes and garbage and recycling and maybe the parks,” Dunne said Wednesday at a news conference outside the Levittown Memorial Education Center. “But you know what, our kids and our families are being affected by these substances.”

“I think this is a great idea because we’re worried about the health and safety of our children,” Goosby said.

D’Esposito, an NYPD detective currently on leave, said hookah and other tobacco products can be “gateway” drugs to more dangerous substances.

“I think it’s a step in the right direction,” he said of Dunne’s bill.

Town spokesman Mike Deery said there is at least one hookah lounge “that we’re aware of” in the town’s unincorporated areas but there could be others “that are not complying with permits.”

According to the Centers for Disease Control and Prevention, hookah use can have the same health effects — including several types of cancer — as smoking. The agency also said hookah use is increasing among youth and college students.

“We have to do something,” Dunne said.

Freeport school board president, beloved educator dies at 68
1:49 Forecast: Rain through Monday, then a warm up
1:42 Transition to high school more troublesome because of COVID-19
1:34 Fighting COVID-19: How medical experts have faced the virus
How to get a COVID-19 vaccine appointment
2:19 A baby journal lost on the LIE to be reunited with family
Didn’t find what you were looking for?