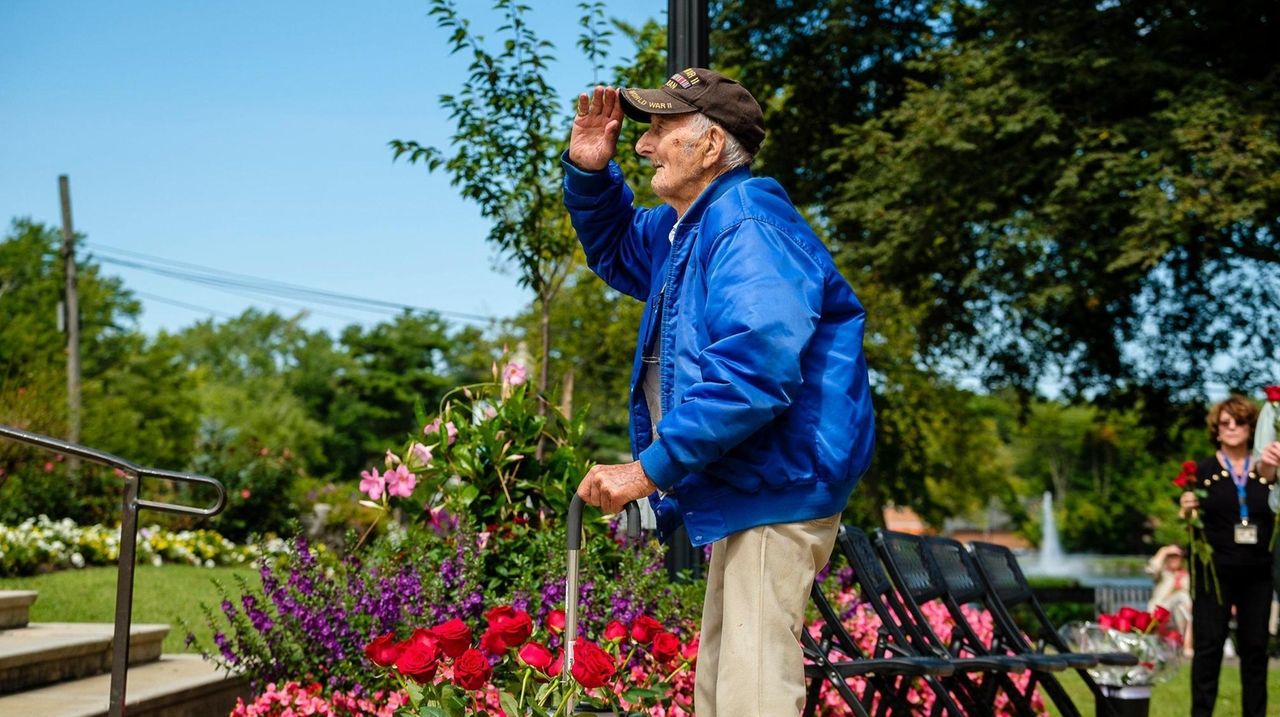 Forty-three names were read on Sunday at Heckscher Park, where more than 100 people gathered to remember the Town of Huntington residents who died in the Sept. 11, 2001, terrorist attacks. Credit: Jeff Bachner

A bell tolled after each name was read. The somber sound was followed by a war veteran placing a single red rose in a bucket outside Huntington’s Heckscher Museum of Art.

In total, 43 names were read on Sunday at Heckscher Park, where more than 100 people gathered to remember the Town of Huntington residents who died in the Sept. 11, 2001, terrorist attacks.

“It is in the memory of your loved ones we hold this ceremony this year and every year so that we can remember your loss, which remains our loss, and educate those too young to have lived through that day,” Supervisor Chad Lupinacci said, standing behind a podium placed next to two lines of corroded steel columns.

In between the columns lies a walking path, which starts with a sign that lists the names of the 43 victims, including seven first responders, who died that day. The town memorial was dedicated in 2006, and every year since, the town has held a 9/11 commemoration service to honor the memories of those who perished nearly 18 years ago.

“Obviously, these ceremonies are very tough,” said Jeanne Kennedy, 51, of Centerport, who lost her brother, James B. Reilly, in the attacks. “You think about the loss of your loved one as well as everybody else and the fact that that day still continues to impact people. People are still passing from the effects of helping out after [the attacks].”

On Sept. 11, 2001, Reilly was working for the investment firm Keefe, Bruyette & Woods on the 89th floor of the south tower of the World Trade Center when United Airlines Flight 175 struck the building. He was 25.

“He’s a great guy, full of optimism, life and love,” his sister said. “He went to [The College of] William and Mary, very smart, was doing very well. And just more than that, though, he was such a good person. Never said a bad word about anybody. Just did the right thing.”

Standing next to her 86-year-old father and three teenage daughters who never met their uncle Jim, Kennedy said the family comes every year to the ceremony in Huntington where she and her siblings grew up.

“We didn’t really recover anything,” she said. “This is a nice way for us to come together” to celebrate her brother’s life and keep his memory alive.

Gloria Burgess of Centerport didn’t lose a loved one in the attacks but goes to a memorial service every year.