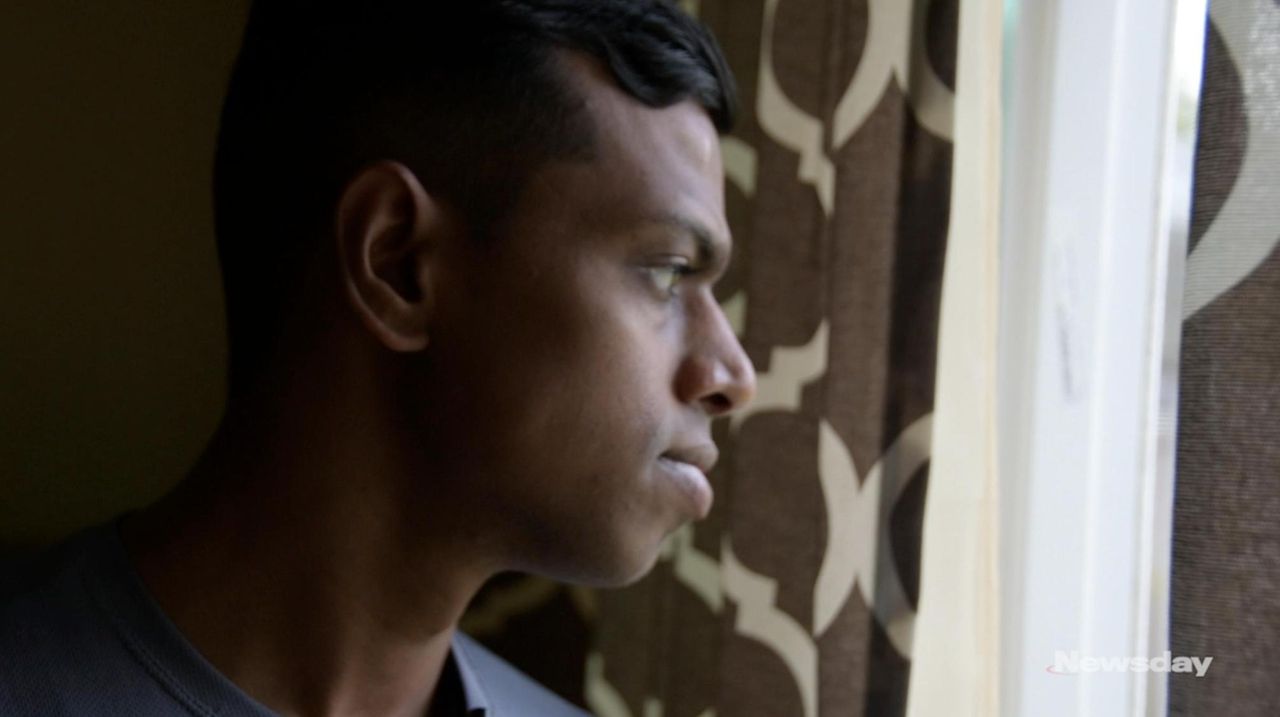 An immigrant from India, Thendral Amudhu Chinnannan, had hoped his service as a Tamil language expert in the Army Reserve would spare him from deportation. Changes in immigration rules being contemplated by the Trump administration may end in deportations for noncitizens like the Hicksville resident, who have been shielded by a DACA-like program that pertains to military personnel, veterans, and their families. Credit: Newsday / Martin C. Evans

The U.S. Army wants him, but he's not sure the country does.

The Hicksville immigrant's native language Tamil was considered so useful by the Army intelligence units, they recruited him under a special program that would speed up his citizenship application.

But the Trump administration is contemplating ending protections for some noncitizen soldiers and their families, and that program has been suspended.

“I can’t work because doing so would be illegal," said Chinnannan, 29, who was born in southern India, and came to the United Sates in 2013 on a since-expired student visa. "And I can’t go back home to India because I might not be let back in. I’m just in limbo.”

Chinnannan — who goes by "Teddy" — was working on a master's degree in energy management at the New York Institute of Technology, in Old Westbury, when he learned of a Defense Department program called Military Accessions Vital to the National Interest. The MAVNI program offered an expedited path to citizenship to legal immigrants with special skills, in exchange for military service.

But the Pentagon stopped accepting new recruits into the MAVNI program in December 2016, Pentagon spokeswoman Jessica R. Maxwell said in an email.

Maxwell said individuals who enlisted under the MAVNI program before its suspension are allowed to remain in the military while their records undergo deeper scrutiny.

“I’m not able to speak to an individual case but in general, applicants will undergo additional background checks,” Maxwell said.

She said the issues with the program were about national security, not immigration.

“DOD suspended MAVNI in 2016 after several classified assessments concluded that the program, as previously configured, was vulnerable to an unacceptable level of risk from insider threats such as espionage, terrorism, and other criminal activity,” Maxwell said.

But immigration lawyers say the suspension of MAVNI as well as other changes in immigration rules they say are being considered by federal authorities may result in deportations. These policies have until now largely shielded noncitizens serving in the military as well as their families from deportation while their immigration status is formalized.

Tom Jawitz, vice president for immigration policy at the Center for American Progress, said the MAVNI program has been especially effective at giving America’s military personnel access to languages such as Tamil, which is spoken almost exclusively in southern India and Sri Lanka.

“Suspending a program that provides assistance in languages or other skills for other military personnel who need these services doesn’t make much sense.

“It’s completely counterproductive to end this program,” Jawitz said. “The same is true for parole in place.”

Immigration lawyers have said possible changes to immigration policies would also affect family members of noncitizen soldiers who have family members that have been allowed to remain in the country under policies that allow out-of-status immigrants to “parole in place.” These policies have effectively granted temporary legal residency status to family members of U.S. troops on a case-by-case basis — much like the Deferred Action for Childhood Arrivals — the so-called DACA program.

Margaret Stock, an immigration attorney based in Anchorage, Alaska, told Newsday that the uncertainty could harm military readiness by distracting troops from their duties. About 8,000 noncitizens join the U.S. military each year, according the Department of Veterans Affairs.

“Soldiers can’t concentrate on their military work if they are concerned they or their family may have to leave the country,” said Stock, a former Army Reserve lieutenant colonel, who has taught at the U.S. Military Academy at West Point.

Able to serve, unable to work

Chinnannan's immigration status has left him unable to work legally, so he squeezes by on the $300 per month he receives as an Army reservist.

He drills once a month as a member of the 351 Tactical Psychological Operations company, based at Fort Totten, in Queens.

Chinnannan enlisted in the Army Reserve under the MAVNI program in July 2016. His student visa expired within a year of that, said Beverly Cutler, an immigration lawyer who is advising him.

He said he expected his citizenship status to be resolved by now, but pending background checks have held up the process. Without the visa, he said his immigration status depends on MAVNI's uncertain future.

“What Teddy has experienced in the last two years is what more people will experience if the Department of Homeland Security starts denying deferred status to military and their families,” Cutler said.

On a recent July afternoon Chinnannan sipped a masala tea boiled with milk and served hot and sweet at the Hicksville home he shares with a crowd of roommates. He does without a car and gets by with money sent from his parents in India.

His father works for an insurance company in his hometown 100 miles south of Bangalore. His mother teaches high school.

Chinnannan said he is afraid that the knock on his door could come at any time, announcing that he will have to leave the country.

“I’m proud to be in the Army, I want to serve this country, and I want to contribute to making the world more energy efficient,” he said. “But right now, I can’t plan anything. I don’t even know if I’ll be allowed to stay.”