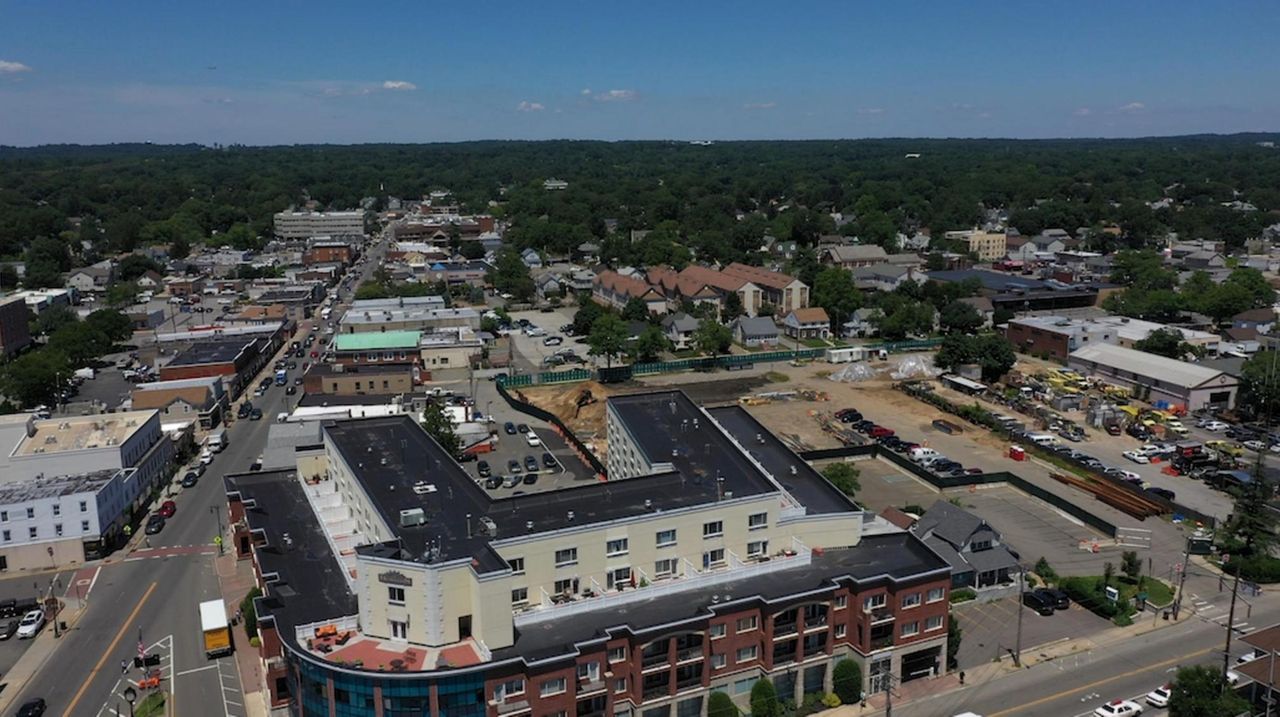 The Village of Westbury has released a long-awaited plan to transform a degraded industrial zone north of the Long Island Rail Road station, as seen on June 26, into a transit-oriented neighborhood for millennials and seniors. Credit: Newsday / Yeong-Ung Yang

The Village of Westbury has released a long-awaited plan to transform a degraded industrial zone north of the Long Island Rail Road station into a transit-oriented neighborhood for millennials and seniors.

The plan, which will be detailed at a July 11 public hearing, comes three years after Westbury became the first community on Long Island, and just one of 10 statewide, to receive a $10 million downtown revitalization grant in 2016.

Of the seven projects funded by the grant, village officials have called rezoning 50 acres of land bounded by Union Avenue, Post Avenue, Maple Avenue and School Street their most impactful effort in the long run.

“Everybody is trying to figure out how to keep their community healthy and sustainable for the future,” Mayor Peter Cavallaro said. “From what we’ve seen, the transit-oriented development offers the best possible manner in communities that have train stations to spur economic development.”

Officials said rezoning an unattractive industrial area filled by auto shops, truck yards and warehouses would help bolster businesses along Post Avenue, the village's main thoroughfare, expand the tax base and address the needs of seniors who want to age in place and young professionals who want to live close to downtown and the train station.

“That area is underutilized. It’s kind of an eyesore,” said Julie Lyon, president of Westbury Arts and a resident. “It’s also a prime piece of real estate” because of its proximity to the train station.

Supporters of the plan said the rezoning is conducive to creating a more aesthetically pleasing area near the train station, which would bring in new businesses to open shops and visitors to patronize local businesses.

“This is an opportunity to create something that’s going to attract visitors and make the village a better place to live for us residents,” Lyon said.

The new zone would also help meet the demands of today, supporters said, by laying the groundwork to add housing units for young people and seniors.

“There’s a need for young people to have residential access and easy access to get into the city,” said Chester Barton, president of the Hedges Civic Association. “Westbury tends to lean on the older side. It needs to have new blood.”

In the proposed zone, buildings close to the train station could go as tall as five stories or 65 feet, which the mayor said would not be unusual since the village already has several five- and six-story condo buildings near the train station.

Cavallaro, who has spent his entire life in Westbury, said the rezoning would allow growth without altering the character of Westbury, which he described as “a primarily single-family residential community” that is “extremely diverse.”

Looking ahead, Cavallaro said that change is inevitable and that the rezoning will help make Westbury stronger and more sustainable.

“This is for generations to come,” the mayor said. “If you stand still, if you don’t address those needs, then your community will ultimately spiral down.”