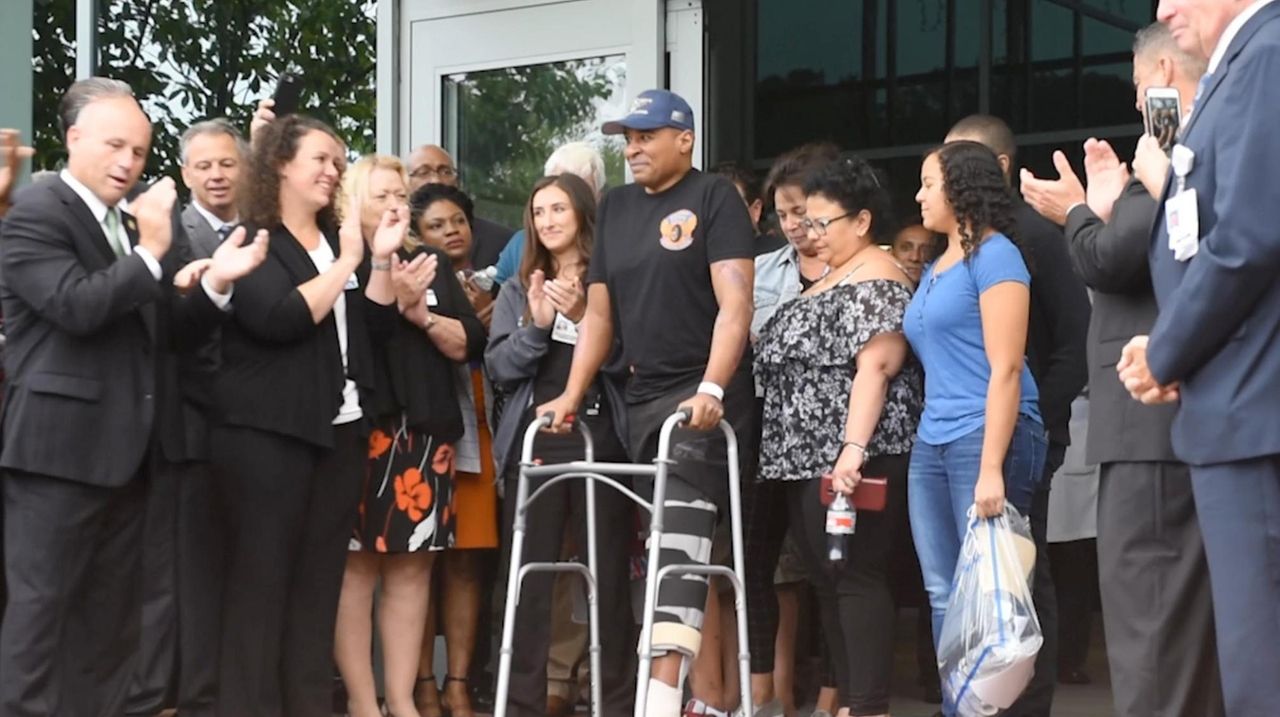 Nassau Police Officer George Day on Saturday left rehab after recovering from multiple fractures and a collapsed lung since being struck in July by a hit-and-run driver while on duty.   Credit: Newsday / Howard Simmons

Two months after Nassau motorcycle officer George Day was critically injured by a hit-and-run driver, the 14-year veteran of the force, with the help of a walker, left a Port Jefferson rehabilitation center Friday.

Day left behind five surgeries and a lot of suffering from 19 broken ribs, damage to both lungs, and injuries to his right shoulder, left leg, a hip and a wrist. He faces more rehab ahead before he knows whether he will ever mount a motorcycle again, let alone return to his job.

As he emerged from the St. Charles Rehabilitation Center on Friday, Day still was unable to use that left leg, which was encased in a brace. But his spirits lifted mightily as he saw before him more than 100 police officers, friends and family standing in a steady rain cheering him on.

While Day, 46, was fighting for his life after the crash, calls for prayers went out across the country on social media. And, indeed, Nassau Police Commissioner Patrick Ryder said his recovery represents nothing less than "proof of God."

At 8:30 on the morning of July 6, Day was patrolling along Bellmore Avenue in North Bellmore when a driver blew through a stop sign and slammed broadside into his motorcycle, police said. He was sent flying to the ground, and his bike flew even farther.

Then, Ryder said, the driver of the Subaru Forester, Hussam Rajab, fled, leaving Day "for dead."

Fortunately, the front bumper and license plate had fallen from the Subaru, and police tracked down Rajab less than a half-hour later driving on Sunrise Highway near the Meadowbrook Parkway.

Rajab, 40, of North Bellmore, was charged with leaving the scene of an auto accident with serious physical injury, His next court date is Sept. 16.

The momentous greeting Day received Friday — replete with bagpipe players and police on horseback — reflects the support he's received since the crash.

After Day was rushed to Nassau University Medical Center, so many police showed up that the hospital designated a space just for them. Officers picked up and delivered his wife, Pilar, to his bedside.

Pilar Day remained there virtually his entire stay, sleeping next to him many nights and rarely returning to their home in Suffolk. His wife of 27 years said she went through waves of different fears.

At first, she didn't even know whether her husband would survive. When that passed, she feared he would lose his badly damaged left leg.

Asked how she felt Friday, she at first was so emotional she could not speak.

Day's daughter, Christine Day, 23, said the family faced dire decisions early on. Surgeons wanted to operate on the many breaks in her father's leg, but the trauma doctor said he was so weakened that he might not survive the surgery. Eventually the trauma doctor agreed to the surgery but insisted it only last an hour.

"It felt like every day, there was something," she said.

Day was placed in a medically induced coma for 12 days, said his son, George E. Day, 26, of Queens. The hardest part, the son said, was not being able to talk to his father. All he could do was look at his father sleeping, wires spiraling across his body, four tubes in his chest. He was so swollen that his body could not fit into the MRI machine.

When Day awoke, the longtime police officer had no memory of what happened to him, his son said.

"He didn't want to know," said his son, who is himself an NYPD officer. "He was scared."

That, the young man said, assured him that his dad's mind was still sound.

So many people visited Day that those close to him had to ask some people not to come, said Nassau Deputy Insp. Daniel Collins, a friend of Day who had worked with him for a decade.

"His nickname is Gentleman George," Collins said. "He loved riding his motorcycle. His leather was always shined, his brass polished and his motorcycle clean."

Over time, George Day was transferred to Stony Brook University Hospital, and then to the rehab center two weeks ago. He's now able to walk short distances with the help of the walker.

As he exited the center Friday, people called out full-throated cheers. Cameras flashed. And the police officers, many in their dress blues, stood ramrod straight in the rain.

Ryder told Day that no matter what, there's a job waiting for him on the Nassau force.

Day's wife joined him in the dark Ford SUV. And a long line of motorcycle cops, their red and blue lights going, led him home.

Nassau cops: Second surgery for officer hurt in hit-runOfficer George Day's motorcycle was struck by a hit-and-run driver July 6 in North Bellmore, police said. Man accused of broadsiding cop arraignedHussam Rajab was ordered held on $20,000 bond or $10,000 cash bail after being charged with leaving the scene of an auto accident with injury. Cops: Officer in critical condition after hit and runPolice soon arrested a suspect in a car that had lost its front bumper and license plate in the collision.