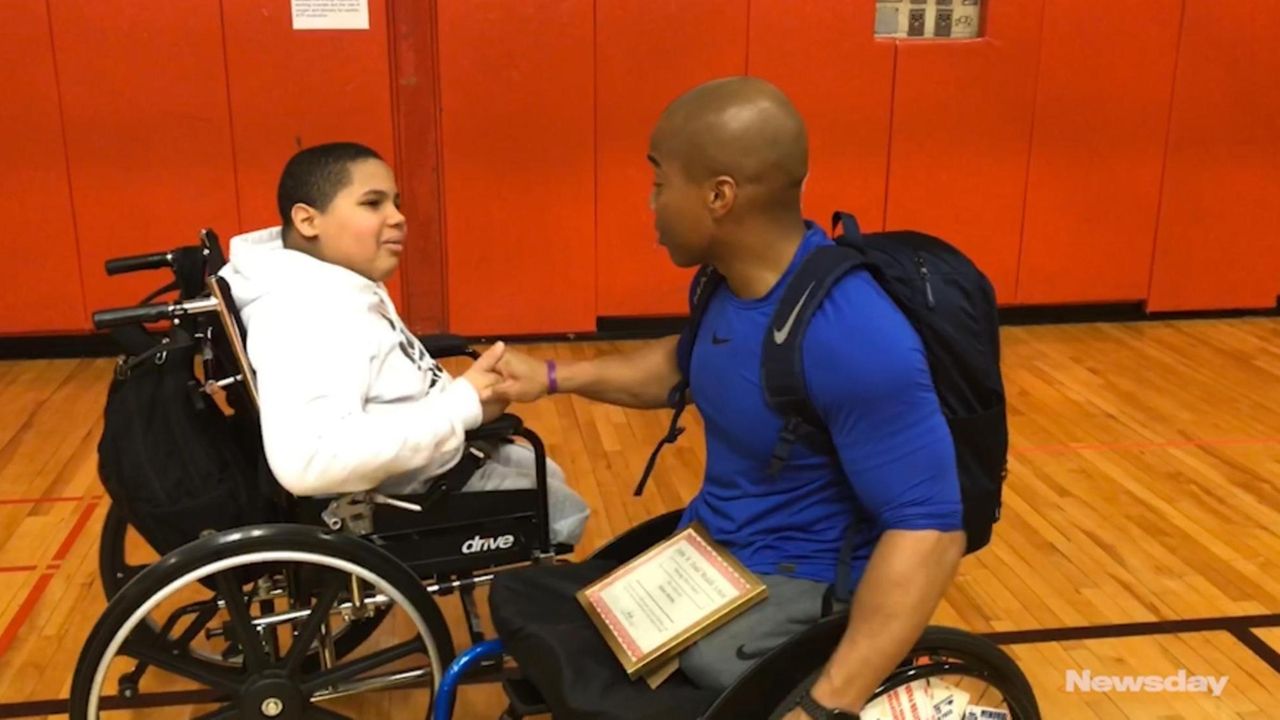 Weslie Capellan is only 12, but he knows what it means to be challenged — really challenged — every day. He navigates life without his legs.

On Wednesday, Weslie had the chance to hear firsthand from someone who understands all too well his perspective of the world: Rohan Murphy, too, doesn't have legs.

Murphy came to J.W. Dodd Middle School in Freeport, where Weslie is a seventh-grader, to talk about adversity — and how to overcome it.

The Long Island native, who turns 35 in a few days, found his success through wrestling. He had a successful career at East Islip High School, then went on to join the team at Penn State University. He also is an internationally recognized powerlifter. Today, he is a motivational speaker.

Wednesday's speech, though, was different for Murphy because Weslie was in the crowd.

“I wish I had someone like myself when I was his age, because growing up, I didn’t know anyone else that was disabled,” Murphy said after the schoolwide assembly. “It was tough to figure out life without legs because obviously there’s no book on how to live life without legs.”

The speech was arranged by Kimberly Kavazanjian, Weslie's science teacher. She heard about Murphy from a high school friend of hers who works at Long Beach High School and reached out to him via Facebook Messenger.

The former wrestler's “only request was a grilled chicken salad,” Kavazanjian said.

In his address, which was funded through a grant, Murphy shared how he came to join Penn State's wrestling team. The head coach wanted Murphy to be team manager. He was doubtful that an amputee could wrestle. Murphy showed his stuff, taking down the coach right there and earning a tryout that would land him on the team.

Weslie took Murphy's gutsy message to heart. What resonated the most was Murphy’s motto of “no excuses.”

“It was very cool what he did and what he told us,” Weslie said. “It was very inspiring.”

Weslie plans to join the school’s wrestling team, and Murphy plans to work with Weslie on his wrestling moves.

Weslie also figures he can use Murphy’s words of wisdom to his advantage during a match.

“When I’m wrestling and I feel bad, I can just think about that, what he did and all the matches that he did,” Weslie said.